Sir Henry Wood commissioned Britten’s Piano Concerto in 1938 when the young
composer (not yet 25) took the solo part at the work’s premiere at the
Proms. It received a mixed reception, and in 1946 Britten introduced a
revised version, which was that performed at tonight’s Prom. Leif Ove
Andsnes made his Proms debut with the work in 1992.

The concerto is notable for the brilliance of the piano writing, and the
sense of sardonic wit which flashes through the work particularly in the
orchestra. Britten gave each movement a title, ‘Toccata’, ‘Waltz’,
‘Impromptu’, ‘March’.

For the ‘Toccata’ the brilliant piano part pits the soloist against the
more sardonic orchestra. Edward Gardner drew some vivid playing from the
BBC Symphony Orchestra and Leif Ove Andsnes countered with contained
virtuosity. The balance between piano and orchestra was not always ideal,
and Andsnes seemed to want to show that there was more to the concerto than
mere showy pianism. The second movement ‘Waltz’ started with a haunting and
haunted theme in the orchestra, whilst the piano’s initial entry seemed to
veer dangerously close to the cafÈ! That said, as this movement progressed,
veering between the serious and the sardonic, I felt I wanted Andsnes to
have a bit more fun. The ‘Impromptu’ started with a beautifully simply
piano chorale, and it was the bitter-sweet nature of this which both
orchestra and soloist developed. The final ‘March’ was described in the
Proms programme book as bringing a military threat, but initially Edward
Gardner and the orchestra made it feel more engaging, though a creepy sense
of threat came in only to be brushed away by the sparkling wit of the solo
part.

Britten’s Piano Concerto is perhaps not as well-known as his
Violin Concerto, but here Leif Ove Andsnes, Edward Gardner and the BBC
Symphony Orchestra made a strong case for the work, though I wished Andsnes
playing had had a more demonstrative sense of fun. After all, this is the
work of a young man.

Following the interval, the mood changed for Mahler’s late song cycle.
Completed just under 30 years before Britten’s concerto, there is a world
(and a world war) between them. Mahler writes for a large orchestra, but
what was noticeable about Edward Gardner’s performance was the way things
easily evaporated to just a few instruments. There was a transparency and
sense of fine detail in the orchestra, a feeling of control that was almost
classical for all the intense moments of high emotion. 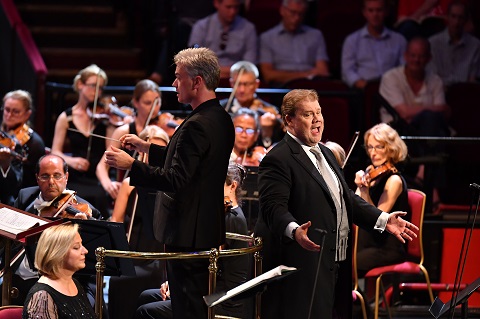 The orchestral playing in ‘Das Trinklied von Jammer der Erde’ had a
brilliance to it which at times threatened to over-balance Stuart Skelton’s
exuberant performance, which in later verses became wonderfully trenchant.
The dark hues of Skelton’s voice suit the piece, though perhaps a brighter,
more forward placed voice would have carried better over the orchestra.
After a touching orchestra introduction to ‘Der Einsame in Herbst’, Claudia
Mahnke had a lovely way of handling the exposed first entry. Mahnke took
quite a straight, direct approach to the music, letting it speak for itself
without the emotionalism of the performances I have been typically used to.
Whilst she shaped the phrases expressively, her diction as somewhat
occluded and we had difficulty following the words even with the printed
crib. ‘Von der Jugend’ was light and perky, with Skelton taking engaging
delight in the story-telling element here. There was a lively transparency
in the orchestra in ‘Von der Schˆnheit’, though Mahnke’s performance felt a
bit over careful, and in the latter sections she never quite matched the
vibrancy and passion of the orchestral playing, making rather a sober
interpretation. ‘Der Trunkene im Fr¸hling’ started in lively fashion,
albeit with moments of tenderness. Skelton was wonderfully involved in the
story again, and we began to appreciate the sheer tirelessness of his
performance. It is a long time since I have heard a tenor so apparently at
east in Mahler’s often cruel tenor writing.

‘Der Abschied’ saw Mahnke finely controlled and quite straight in her
phrasing, her understatement making the piece all the more moving. Gardner
and the orchestra brought a lovely spaciousness to the long orchestral
section before the final stanzas, though again this was not as overtly
emotional as some performances. Mahnke brought moments of real intensity
and a great sense of joy to the closing verses, with a touching fading away
in ‘Ewig… ewig…’ This was a controlled, moving performance, but one which
kept extreme emotions in check somewhat, so that it lacked the great sense
of catharsis that some performers bring to the piece.