New Englanders are no different. The audience for last weekend’s concert performance of Die Walküre at the Tanglewood Festival seemed somewhat smaller than usual – filling over half the outdoor venue. Yet those present listened with rapt attention throughout and rose in an immediate standing ovation, whooping and hollering, after each act.

The adulation was deserved. This was the most emotionally moving – and, in some respects, musically satisfying – performance of this work I have witnessed in several decades. This is a tribute, above all, to the world-class cast of singers, led by three leading Wagnerian ladies.

The most memorable performance came from the youngest of the three: Oregonian Amber Wagner. Not since the great Austrian soprano Leonie Rysanek retired the role of Sieglinde thirty-five years ago have I heard anyone approach the character with such a combination of power and emotion. 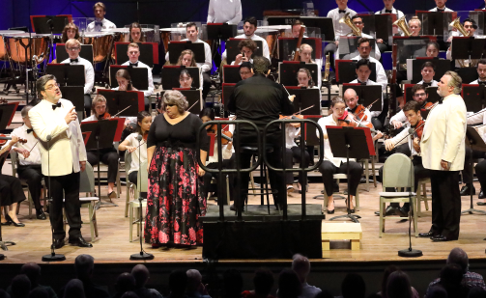 In this era of ever smaller dramatic voices, the astonishing size of Wagner’s voice must be experienced live to be believed. Her command ranges from a girlish yet perfectly focused tone to a massive all-enveloping forte that effortlessly surrounds thousands in a sprawling open-air venue. And, just when one thinks she has reached her limit, she expands the voice further and soars rapturously through musical climaxes.

Singing all out in this way would exhaust most singers, yet Amber Wagner has resources left over to balance power with subtle expression. Sieglinde is perhaps most passionate and sympathetic character in all Wagnerian opera: a battered woman in a forced marriage who, one night deep in the forest, unexpectedly encounters the only person in the world perfect for her. Together they experience the only moments of bliss either will ever know.

Amber Wagner inhabits the extremes of Sieglinde’s trauma and ecstasy with heartbreakingly vividness and vulnerability, yet also finds ways to animate even seemingly insignificant lines – for example, the questions she poses to Siegmund – as if her life depended on it. Throughout Wagner retains a mezzo-like warmth appropriate to this woman of flesh and blood.

One caveat: Wagner does occasionally push her voice too hard. As a result, a few high notes drift sharp and many low phrases begin with a bark akin to a vocal fry. These are odd and (apparently) unnecessary blemishes in a singer so naturally endowed with vocal heft. Banish them and she could be, incontestably, the greatest Sieglinde of the early 21st century. 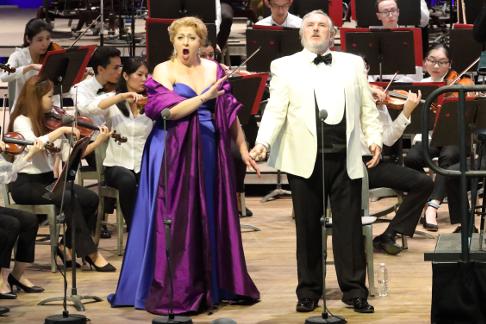 The other leading soprano, Christine Goerke, has emerged in the last few years as America’s go-to Brünnhilde, singing the role in Chicago, Houston and, just this spring, at the Met. Whereas Amber Wagner was born with a large and heavy voice, which she spent ten years refining from the bottom up, Goerke has a more lyric instrument, which she has been expanding in size and extending downwards. Beginning a quarter century ago, she enjoyed considerable success in Handel, Mozart and Gluck, then lost that ability as her voice deepened, and recently reemerged as a full-fledged dramatic soprano. If she still lacks the overpowering mass or the silvery edge of some Brünnhilde voices, she compensates with rock-solid technique, plush elegance, and sparklingly clear diction.

Above all, Goerke is an artist of refreshingly heartfelt emotionality. She communicates, facially and vocally, each step in Brünnhilde’s painful transformation from a naïve tomboy to a rebel willing to defy paternal authority for love. Even she seemed to wipe a few tears from her eyes as the final chord died away.

Veteran mezzo-soprano Stephanie Blyth portrayed Fricka, Wotan’s haranguing spouse. Like Amber Wagner, her penetrating voice is a physiological marvel: a massive mezzo with tenor-like low tones that approximate the (today nearly extinct) true contralto timbre. These days she is not, however, given to singing softly, gently or introspectively, so her characterization of Fricka highlights the vengeful anger of a wronged wife far more than the underlying love and loss that motivate it.

Even the famous “Ride of the Valkyries,” with its chorus of eight warrior-maidens, was luxury cast. Top emerging artists sang alongside those with long resumes in leading roles. Especially impressive in the latter category was the clarion yet musical Gerhilde of Kelly Cae Hogan, who has herself portrayed Brünnhilde at major European venues. They raised the roof. 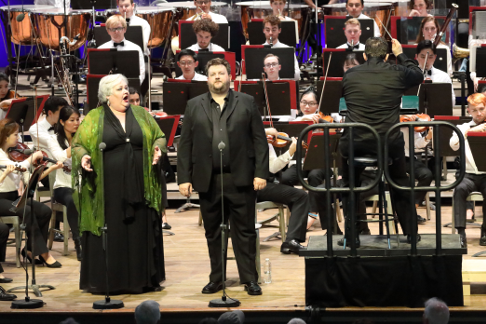 While not quite reaching the heights of their female counterparts, three distinguished male singers added some more fine moments. British bass-baritone James Rutherford does not command the full range of Wotan’s heroism (at the top of the voice) or gravity (at the bottom). Yet he compensated by interpreting some passages unusually softly, often to great musical and dramatic effect – as in a heartbreakingly understated account of “Wotan’s Farewell.”

Veteran German bass Franz-Josef Selig has sung in top venues worldwide. He presented a solid, well-enunciated Hunding, even if he failed to convey the full brutality and masculine entitlement of this hulking tribal chieftain.

The Tanglewood Music Center Orchestra, comprised of instrumental players aged under 20, played with elegance, enthusiasm and – a few brass bloopers late in the day aside – precision. Particularly lovely were the violas, cellos, clarinets and oboes. To be sure, the sound sometimes lacked the warm veneer of a top pit band. Still, it is a testament to the extraordinary wealth of instrumental talent in the world today that such an ensemble of students can play this well, even though surely few (if any) had ever encountered this challenging score.

On the podium, BSO chief conductor Andris Nelsons cued with clarity while sensitive to instrumental detail. Still, some parts of the score (Act I especially) seemed to lack a bit of overarching architectural unity – perhaps not surprising under the circumstances.

This Die Walküre was a concert performance. Wagner himself famously himself believed that his Der Ring des Nibelungen was multi-media art: he constructed the Bayreuth Festival Theater in order to support an utterly immersive staging. Yet seeing this opera in concert with a cast as expressive as this one, spaced over 24 hours, is a remarkably satisfying experience.

Stripping away the myriad distractions of sets, costumes, technological razzle-dazzle and modern directorial concepts encourages singers to act with their faces and voices, drawing the audience more into their intimate grief and joy. Even the rambunctious Valkyries have an opportunity be genuinely fun-loving sisters – an effect that usually seems a bit ridiculous on a massive stage. Moreover, individual orchestral instrumentalists, which in Wagner often express unspoken emotions, are clearly visible – something O’Neill used to particular effect, gazing at a cello or trumpet as it read his thoughts.

This reminds us that, underneath the mythological overlay of gods and magic, Die Walküre is opera on a human scale. It rests on a series of personal dialogues among family members: an incestuous sister and brother, an unfaithful husband and wife, a stepsister and brother and, at its heart, a loving but increasingly dysfunctional father and daughter. All this came through last weekend with a power and honesty one rarely experiences on the opera stage today.