Stendhal blamed the banality of the music – ‘a servants’ hall vulgarity’ –
which failed to inspire his imagination, because it left too little to the imagination.

The same certainly could not be said of director Stuart Barker’s production
of Rossini’s prince-and-pauper fairy-tale romance for British Youth Opera
at the Peacock Theatre, which found a perfect balance between fantasy and
realism. Bek Palmer’s designs merged the Dickensian with the
Expressionistic, with an occasional dash of Walt Disney thrown in. The
acute rakes, plunging angles and oppressive shadows of the Act 1 set
established the grey, bleak world in which Angelina toils and suffers:
after all, the very name Cenerentola suggests a life lived amid ashes – and
on this occasion the bullying Don Magnifico and his dastardly daughters,
Clorinda and Tisbe, practically shoved this ragged Angelina into the
fire-place with a broomstick. The only touch of colour was the purple
velvet of ‘Dandini’s’ jacket and ‘Prince Ramiro’s’ splendid green spencer
jacket – the gilt trimming and brocade hinting at Cinders’ future good
fortune, perhaps. 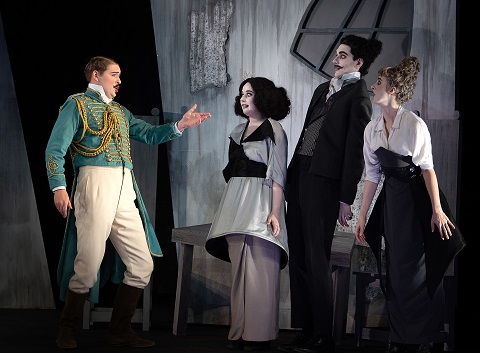 Transformation came via a starry indigo front-drop, as Angelina was whisked
in a crescent-moon stagecoach – the man-in-the-lunar-carriage smiling
beneficently – to the Klimt-like arbours, vaults and turrets of the
Prince’s palace, for Act 2. There may be no glass slipper in librettist
Jacopo Ferretti’s version of the fairy-tale, but Angelina’s essential
goodness and preciousness seemed reflected in her surroundings – a
shimmering dazzle of gold and light.

Rossini makes considerable demands upon his cast and the young singers
uniformly met them with panache. Mezzo-soprano Si‚n Griffiths has made a
strong impression as part of the ensemble in several recent BYO productions
– Riders to the Sea and

Riders to the Sea and S?vitri


(2016) and Judith Weir’s The Vanishing Bridegroom (2017) – and it
was satisfying to see her take her moment in the title role in her stride,
expressively establishing Angelina’s sadness and gentility in ‘Una volta
c’era un re’ and stylishly negotiating the glittering coloratura and
gleaming peaks of ‘Nacqui all’affanno’. Griffiths’ mezzo has a lovely
darkness at the bottom, capturing the depth of Cinders’ melancholy, and it
brightens as it rises, accurately and agilely nailing every individual note
in Rossini’s fearsome fioritura. 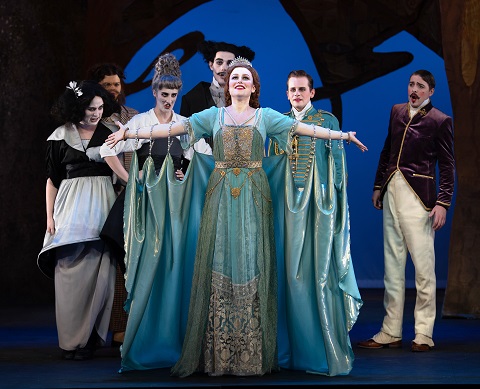 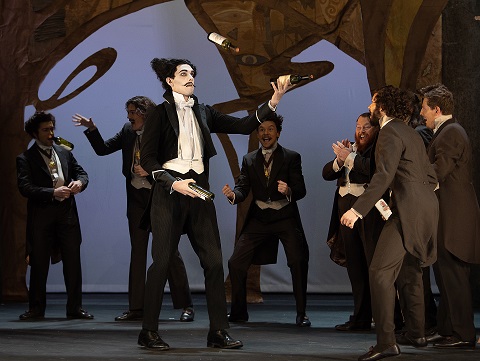 I admired Adam Maxey’s Figaro at the

and he used his strong baritone to balance the brutality and buffoonery
which characterise Don Magnifico: threatening Angelina with violence and
cruelly pronouncing her to be dead with the Prince comes calling, and
ebulliently juggling the Prince’s vintage vinos in celebration of his
promotion to ‘Master of the Wines’. The surreal cavatina in which Don
Magnifico dreams he is an donkey, but a dignified one – “un bellissimo
somaro … ma solenne” – was exuberantly comic. Maxey’s height – and his
coiffure and superciliary extravagance (a touch of Disney’s Lady Tremaine,
perhaps?) – helped him command the stage, and made Don Magnifico’s fall
from disdain to discomfort all the more satisfying.

Liam Bonthrone was a Prince Ramiro of integrity. Bonthrone and Griffiths
blended beautifully in their Act 1 duet, ‘Un soave non so che’, both
crafting shapely melodies, and the tenor fearlessly climbed to the top of
Rossini’s challenging vocal lines, using the energy of the music to suggest
the Prince’s ardency and nobility. Jerome Knox enjoyed his chance to be
Prince for a day: his Dandini was confident and ingratiating.

Ferretti gives Angelina no fairy godmother to replace her own absent one.
Instead, she has to make do with Alidoro, allegedly the Prince’s tutor. In
BYO’s

last year, bass Thomas Mole was a splendid Keeper of the Madhouse, a title
that might have been just as fitting on this occasion: attired in a tweed
suit and adorned with charmingly whimsical whiskers, Mole was an altruistic
guardian, ensuring that goodness got its just rewards but retaining just
the right touch of mystery and magic. 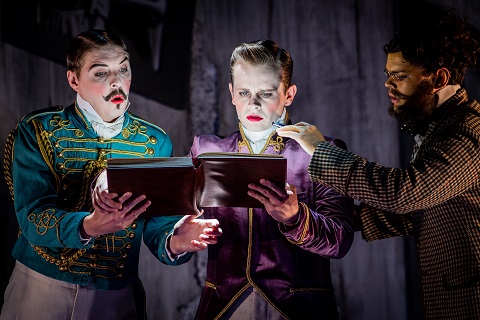 In the pit, conductor Peter Robinson led the Southbank Sinfonia in a
performance that failed to match the dizzying, dazzling action on stage.
The instrumental playing was competent but lacked the kaleidoscopic colour
and movement which Rossini score offers.

The performance was sung in Wilfred Judd’s 1986 English translation in
order, according to Assistant Conductor Chloe Rooke’s programme note, to
‘give the singers the opportunity to communicate directly with an audience
and to reproduce English speech rhythms in their working of the musical
lines’. Well, they certainly communicated with punch – particularly
impressive given the rather unhelpful Peacock Theatre acoustic – but since
the open vowels and soft consonants of the Italian language, particularly
at word-endings, facilitate the bel canto style, one wonders
whether the young singers might have welcomed the opportunity to develop
their skills in that idiom.

That said, this was a delightful evening of astute comedy and accomplished
singing. The young cast were fully in command of their roles and the drama
unfolded with a naturalism that belied the comic follies. Ferretti eschews
the dark conclusion of the Brothers Grimm – in which the sisters have their
eyes pecked out by doves, punished for their wickedness with blindness –
preferring Charles Perrault’s reconciliation in which Angelina pardons her
sisters for their former viciousness. Given the current confusions and
absurdities of contemporary public life, it’s reassuring to think that,
perhaps, a ‘Happy Ever After’ ending might be possible after all.