The thematic link between Vaughan Williams’sFantasia on a Theme by Thomas Tallis and Hugh Wood’s Scenes from Comus might be simply reduced to sonority – a
fascinating juxtaposition of seamlessly interwoven string forces in one,
and an electrifying alchemy of ever-shifting full orchestral timbres in the
other, their differences adroitly delineated by Sir Andrew Davis in
readings of warmth and precision.

The Fantasia began out of nowhere, wonderfully svelte with Davis
sculpting the air and fashioning handsome playing from the BBC Symphony
Orchestra that encompassed majesty and mystery. Its muted smaller ensemble
at the rear of the stage was daringly quiet but flawlessly integrated into
the bigger picture – everything detail glowing with affection as if the
players were shaking hands with a much-loved friend. One could almost
imagine we were in the sacred space of Gloucester Cathedral where the work
was first performed and where its organist once described Vaughan Williams
as “a queer, mad fellow from Chelsea”.

A similar sense of intensity and nobility emerged from Hugh Wood’s Scenes from Comus. It’s part-cantata and part-orchestral
tone poem with vocal soloists, setting passages from John Milton’s 1634
Masque. Its first appearance at the Proms in 1965 brought the composer
valuable exposure and wide public acclaim. This captivating account was
launched by Martin Owen’s fluent horn solo – the work’s opening tone row
indicative of much that was to follow in a score embracing serialism yet
revealing an expressionistic lyrical strain embedded in a Romantic
sensibility. While Schoenberg was a major stimulus, other influences come
into play most notably in an extended orchestral episode evoking the
monstrous Comus (son of the witch Circe) who invites his followers to join
“a light fantastic round”. It’s a tour de force of orchestral
writing to which the orchestra responded with magnificent playing,
conjuring its orgiastic dance with fierce commitment and evident enjoyment.
There was much to enjoy too from soprano Stacey Tappan and tenor Anthony
Gregory whose clear voices and fluent traversal of the work’s demands made
them ideal advocates, even if on occasion the sheer weight of orchestral
sound pitted against them was not to their advantage. 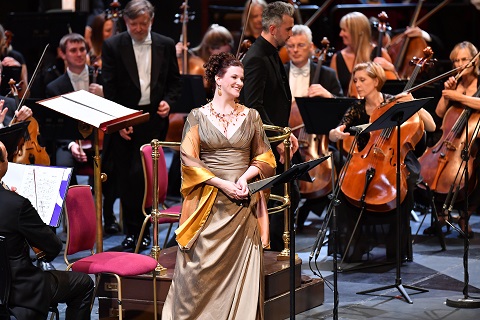 Where Scenes from Comus arises from the beginning of Wood’s
musically creative outpouring, The Music Makers (1912) was to be
one of Elgar’s last works for choir and orchestra and has been unjustly
overlooked. Setting Arthur O’Shaughnessy’s Ode for a contralto soloist,
it’s sometimes regarded as a problematic work in that the newly composed
themes rarely achieve the same memorable status as the patchwork of
quotations (most notably drawn from the ‘Enigma’ Variations) and, arguably,
suggests a diminishing imagination. Critical assessment has not been helped
by Elgar’s biographer Diana McVeigh’s patronising comment on The Music Makers as being a “pleasant work to sing but not quite
so satisfying to listen to”.

While O’Shaughnessy’s fanciful text is not always rewarding (“With
wonderful deathless ditties we build up the world’s great cities” being
especially lame), this scrupulously prepared performance with the BBC
Symphony Chorus and a radiant Dame Sarah Connolly made a compelling case
for this cantata. The opening lines “We are the music-makers, and we are
the dreamers of dreams” were sung with a rapt beauty and conveyed with deep
involvement. True, the pianissimo marking was ignored (not so on
the superb Chandos recording) but the words were clearly enunciated and
shaped. Thereafter, Davis drove the score forward, rarely allowing its
momentum to falter and seamlessly interrogating tempo variations, shaping
its paragraphs with assurance and building from “for we fashion an empire’s
glory” to a grandiose climax. Connolly imposed with warmly expressive tone,
and if the upper register didn’t quite have same easy control and richness
as her voice below the stave, she sang with a total immersion in the text
that compels attention. Nowhere was her singing so poignant as the closing
lines; “And a singer who sings no more” – its emotional charge shattering.