So wrote David Blake in an essay, ‘Recollections’, published in 1995 in Hanns Eisler: A Miscellany, of which Blake was editor.
The same might be said of Scoring A Century, a ‘comic opera’ in
twenty ‘panels’, in which Blake and his librettist Keith Warner set out to
trace one hundred years of the changing cultural, musical, political and
economic landscape by charting the 20th-century progress of Mr
and Mrs Jedermann, a pair of song-and-dance Everymen, as they stumble their
way through the significant events and epochs of the 20th
century. The Jedermanns – ageless, guileless and, one might say, clueless –
are intellectual and ideological tabula rasas: clean slates upon which
others can etch their own beliefs, systems, hypocrisies and muddles …
though the scratches don’t make deep in-roads – the Jedermanns grow more
experienced but not necessarily any the wiser.

Scoring a Century
was a millennial project. After some scenes were workshopped by the
University of York Music Department in November 1999, the premiere of the
complete work was planned for Portland, Oregon. Ironically, a work which
set out to define the 20th century was derailed by an event
which will surely be seen as one of the defining moments of the following
century: the 9/11 terrorist attack. The planned premiere was withdrawn and,
following a subsequent cancellation in Dublin, it was a decade before Scoring a Century received its first full performance, in the
Crescent Theatre at the Birmingham Conservatoire in March 2010, directed by
Warner and conducted by Lionel Friend, then conductor-in-residence at the
Conservatoire.

With a cast of twenty-plus performing over fifty named roles and
ensemble-groups of gangsters, jury members, political protesters, secret
agents and dock workers, Scoring a Century is an ideal work for a
large collective of young singers to exercise their talents and demonstrate
their range, and thus an apt choice for one of British Youth Opera’s 2019
summer productions at the Peacock Theatre. Warner and Friend have teamed up
again and they’ve clearly put the cast through their paces: the results of
the obvious hard work are, as Blake said of Eisler, both ‘stimulating’ and
somewhat ‘exhausting’!

If the cast work hard, then Scoring a Century also makes
considerable intellectual, imaginative and aural demands on its audience.
Warner has described the opera as “a low entertainment for high brows, or
vice versa”, but this clear-cut opposition is in fact under-cut by the
complexity and intricacy of the conception. The sequence of tableaux burst
with hyperactive allusiveness and detail, but sometimes progress with a
disjointed leisureliness. The transitions are not always smooth, and I
struggled at times to both rapidly absorb a wealth of cultural references
and maintain an attentive engagement as the chronological arc unfolded. The
challenge for Warner and Blake is to allow time for us to take in what’s
happening in the moment and to keep the flow of history moving, so
that we can appreciated how humans instigate, are caught up in, and respond
to historical events.

That said, the metatheatrical complexity of the piece was balanced at the
Peacock Theatre by a winning simplicity of design. Eighteen
history-travelling panels are framed by an introduction and farewell: an
all-dancing, all-singing review number, ‘This is/was our Show’. As the
Jedermanns perform their way through history, their purpose is only to entertain … so they say. As time ticks by, they pass
through a series of door-panels which swivel to reveal emblems or titles
which confirm time and place; they are edged with a stitch-like trim –
white on black, black on white – which suggests both a railway track on
which the wheels of the history-wagon roll, and the stitching together of
the disparate parts into a seamless whole.

The economy of the staging and the witty use of a multitude of props and
furniture pieces effectively establishes setting and situation, while the
descent of a proscenium further frames four ‘operas-within-the opera’. The
lighting is atmospheric and dramatic, and costumes are absolutely terrific,
recreating an astounding number of sartorial styles – and demanding
lightning-crack changes: one presumes that the back-stage team must have
been working up a sweat too. In a memorable visual coup, the sudden arrival
of the psychedelic ’60s – all yellow flares and clashing florals – was,
after the previously prevailing black, white and grey, a shock to the eyes
comparable to the moral outrage felt by conservatives at the time. 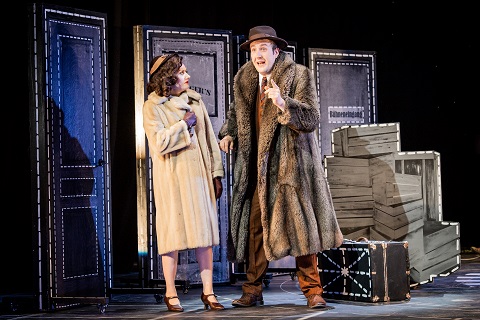 The Jedermanns (Hugo Herman-Wilson and Holly Marie Bingham) start out in
1901 as a support act at the Pier Theatre in Trouville, dreaming of the
utopian future – world peace, a man on the moon. But, their fin de siËcle optimism soon takes its first knock when we are
introduced to the resident composer: the ambitious Berthold (Florian
Panzieri) – his name wryly references to Berthold Goldschmidt, a
German-born Jewish composer who had to wait until his eighties to achieve
recognition and renown – whose first mini-opera, the hubristically titled
‘Playing God’, is set in the trenches of the Somme, where we see a Sergeant
(Andrew Hamilton) play his part in defying death by deliberately disabling
a young Private (Laurie Slavin) with a Blighty.

By the 1920s, relief that WW1 is over has given way to resentment about
economic adversity: a concert party featuring the heroes of Versailles
(Clemenceau, Woodrow Wilson and Lloyd George, played by Panzieri, Guy
Elliot and Christopher Dollins respectively) is dampened by the threat of
unemployment. The Jedermanns’ party seems over, but they adapt to the times
and circumstances, heading to 1930s Spain where Mrs Jedermann tries her
hand in the movies, playing a gangster’s moll. There’s no time to
sentimentalise the death of their son (Laurie Slavin) in the Spanish Civil
War, and in 1938 the Jedermanns set off for Berlin, where Ernest dallies
with the chantreuse Tartine (Joanna Harries). By now, the action feels
quite breathless as Warner piles up witty one-liners and cultural
references in an almost overwhelming intellectual tapestry. There’s little
alleviation of the prevailing feverishly thespian mode either, with
gestures grand and melodramatic, and few excursions into a more ‘realistic’
style, even in the sections of spoken dialogue. At times I did wonder if
less might have been more.

Berthold’s second mini-opera provides a brief pause and musical
expansiveness though: the daily vigil of a couple who wait on a railway
platform for their son, a POW, to return home offers a pathos which is
enhanced by Blake’s expressive writing; the score is ably shaped by Friend
and performed with style by the 27-strong Southbank Sinfonia. The couple
receive a package: inside is a tape of their son’s last words, “They are
not inhuman here”. A gunshot tells a different story.

Having travelled to Russia, in one of the strongest panels the Jedermanns
find themselves both respondents in a Soviet show trial and standing before
the House Un-American Activities Committee, simultaneously accused of
Capitalism and Communism. The split-stage design generated terrific
tension: found guilty and sentenced to ten years in Siberia/New York,
“Onwards” Jedermann declared with characteristically innocent hopefulness.

The panoply of cultural references – popular and erudite – continues to
pile up: Warner even incorporates some wry self-irony, when Berthold
bitterly recalls the directorial conceptualisations which have ‘ruined’ his
operas. The monetarist dream of the 1980s becomes a ballad naively
eulogising the “trickle-down” effect. I confess, that I found the final
panels rather laboured – particularly when the Jedermanns found themselves
in the Los Angeles casting agency of talent- spotter Benny Blumenkohl, and
with their subsequent arrival in the studio where they are to film a 1999
New Year’s Eve TV special. But, the Jedermanns’ progress offers Blake the
opportunity to demonstrate his dexterity in diverse idioms – cabaret, music
hall, musical theatre, popular music, and opera – which merge into and with
his own musical language (primarily in the mini-operas) and other classical
pastiches. 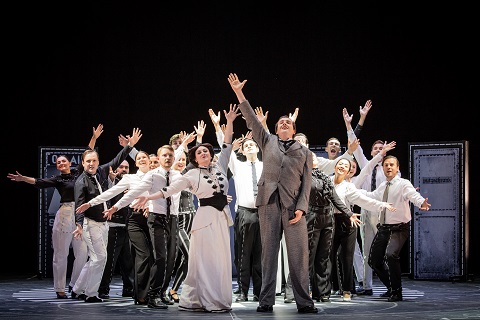 Scoring a Century
is an ensemble piece and given the collective commitment and accomplishment
– and the consistently clear diction, spoken and sung – it seems unfair to
select individuals for praise. But, as the central pair, the every youthful
Jedermanns, Hugo Herman-Wilson and Holly Marie Bingham were astonishingly
convincing and meticulous. When I saw Herman-Wilson perform the part of
Quince in the Royal College of Music’s 2018


he was, by coincidence, similarly stranded in a play-within-a-play,
striving valiantly to make sense of the seemingly senseless. Here, to
dramatic naturalness the baritone added the ability to switch between
idioms with ease, and to employ a soothing, soft lyricism to inject moments
of touching expressive sentiment. As composer Berthold, Florian Panzieri
displayed theatrical panache, successfully skirting the slippery slope of
overkill.

Having reached the millennium, what lies ahead for the Jedermanns? A
nostalgic duet looks back at the good old days: they are confused by a
world run by technological media and threatened by global warming. ‘That
was our Show’ chorus the ensemble, closing the theatrical frame: and, the
door to the future – literally and figuratively – remains closed to
Jedermann.

“Nothing is important,” the Jedermanns have declared. So, what to make of
this chronological mosaic which was simultaneously playfully insouciant and
pointedly insightful? To return to my beginning, some post-show reflection
brought me back to Eisler, a Marxist, who had studied with Schoenberg, and
with whom Blake himself studied at the Academy of Arts in Berlin. This
isn’t the place for a detailed exploration of Eisler’s theories and
practice, but in an article, ‘A Musical Journey Through America’, he
condemns the ‘factory-like’ system of specialisation within the Hollywood
studio, with individuals (condemned to the ‘prospect of becoming hopelessly
dim-witted’) forced to churn out prescribed genres: one does Viennese
waltzes’ another ‘military marches’, one dance music, another only jazz.

If Hollywood manufactured art for the sake of entertainment then elitists
who believed only in art for art’s sake were no better, in Eisler’s view.
‘Hits’ were, according to Eisler (in ‘Hollywood Seen from the Left’),
‘musical numbers that you can sing before you have even heard them’, an
idea that he and Theodor Adorno revisited in 1947, in their dissection of
the relationship between film music and the Hollywood film industry, Composing for the Films, in which Eisler lamented the failure of
the latter to exploit film’s potential to serve as a political tool to
educate the proletariat.

Considered in this context, the Jedermanns’ musically and politically
adaptable-cum-opportunistic progress through the performance idioms of the
20th century might be considered an Eisler-influenced
cinematic-musical montage which, through meta-theatrical irony, exposes the
falsity of the Jedermanns’ “nothing is important”. Perhaps Scoring a Century is both an example and critique of the
uncontainable multiplicity and parity of cultural paradigms which the opera
itself embodies: an exemplification of the collapse of grand narratives.
Exciting or terrifying? – well, I guess that one has to decide for oneself.