Old and young, rich and poor, spendthrift and miser, dreamer and realist:
the opera, through the interventions of Dr Malatesta, tells us, it seems,
that such discords can be reconciled. Or does it? In his new production at
the Royal Opera House (shared with Paris and Palermo), director Damiano
Michieletto suggests that Malatesta’s ‘magic’ is just that: a fantasy happy
ending at odds with realities of human life.

Michieletto and his design team (sets, Paolo Fantin; costumes, Agostino
Cavalca; lighting, Alessandro Carletti) oppose two worlds, past and
present, to illustrate internal and external divisions. This Don Pasquale
lives a nostalgic dream of times past. His house is an iconographical relic
of his childhood. A sepia photograph of his mother rests affectionately on
a bed-side table; his living room and kitchen celebrate 1950s design, and
Pasquale’s frugality; family heirlooms – a grandfather clock and
nineteenth-century landscape painting – evoke the spirit of history. At
times, Pasquale slips back into wistful memories: an unhealthy yellow-green
tint bathes the stage as ‘ghosts’ of his boyhood self enter, and perch on
Pasquale’s knee, or playfully blow out the candles on a birthday cake. 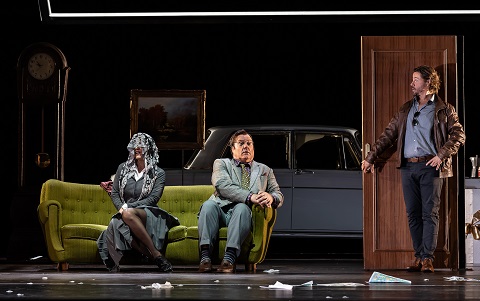 However, the fragility of Pasquale’s nostalgic dreaming is exposed by the
neon strip lights which form a cruelly bright cat’s-cradle roof above
Fantin’s sparse revolving set. The latter is littered with doors
unconnected to any walls which might prevent the fantasy from falling down.
When Pasquale starts to think of the future – if his recalcitrant nephew
won’t obey his instructions, and marry as Pasquale commands, then he will
disinherit the sulky spendthrift and take a young bride himself to ensure a
brood of heirs to prevent Ernesto getting his hands of the family fortune –
then disaster is inevitable. 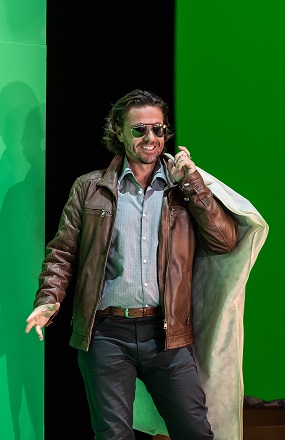 Malatesta proposes his sister, the virginal ‘Sofronia’, fresh out of the
convent, as a suitable marriage match, and Pasquale is delighted. But, when
his bashful bride morphs into a reckless fortune-hunter who plans to
bling-up his house, spend his money on fast cars and fancy frocks, and dash
around town with a mystery lover while he’s left lounging alone on his new
sofa, staring at his minimalist dÈcor, he is less thrilled. The decorators
arrive and begin dismantling his home. In desperation, Pasquale clings to
his grandfather clock, enmeshed in the plastic sheeting which condemns his
past to history. It’s an image of pathos, whatever Pasquale’s flaws.

Michieletto emphasises the cruelty inflicted upon Don Pasquale by Norina
and Malatesta, and if this doesn’t dampen the innate comedy then this is in
no small part due to the wily acting of Bryn Terfel as the lecherous old
Pasquale. There’s a touch of Terfel’s Falstaff in Don Pasquale’s lustful,
deluded, anticipation of the bliss that awaits him: his housekeeper dyes
his hair, he discards his grubby pyjamas and crams his corset-restrained
belly into his ‘smart’ trousers, pulling up the zip with a playful whoop.
Terfel manages the transformation from misanthropic miser to would-be
Romeo, and later to despairing dupe, will enormous skill – and fine
judgement of the details that will tell. His baritone may have lost some of
its smoothness and warmth, but it’s a ‘human’ voice that conveys feelings
directly and with sincerity – just what’s needed here. And, Terfel makes
sure that the text does its work too, enunciating the Italian with
expressive nuance. 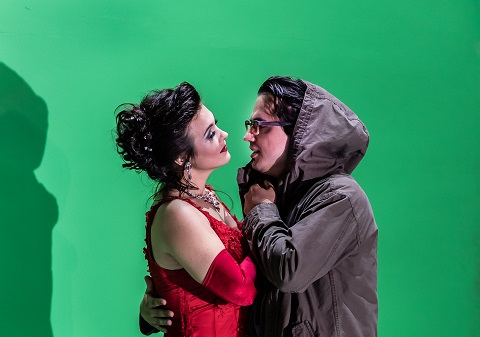 Terfel was equalled, perhaps eclipsed, by Russian soprano Olga Peretyatko,
making a superb Royal Opera debut as a hard-hearted, on-the-make Norina.
The gold-digger shoves aside the dull patina of Pasquale’s past with a
blast of colour and light. We are first introduced to Norina in her
workplace: a fashion photographer’s studio, where she’s a dresser. The
clothes-rail of couture, the flashing cameras and the posing models embody
her own dreams of fame and fortune – the latter emphasised by projected
video images which also reinforce her role-playing insincerity. Peretyatko
has natural comic flair which helped to keep our sympathies in good
balance, though the famous slap which she dishes out to her disgruntled
husband in Act 3 seemed unnecessarily vicious. Technically, she was
immaculate, breezing through the coloratura and demonstrating how to trill
with delicious delicacy. Her soprano had just the right sharpness of edge
as it rose, to convey Norina’s ruthlessness.

Romanian tenor Ioan Hotea struggled a little with some of the higher
reaches of Donizetti’s music for Ernesto, though the final duet for Norina
and Ernesto was well-sung. But, with Michieletto seemingly disinterested in
Ernesto’s romantic dreams, it wasn’t clear what the minx would see in this
teddy-bear clutching moocher, who with the help of Pasquale’s put-upon,
chain-smoking housekeeper, when disinherited and evicted, douses Pasquale’s
precious classic car with oil. One could only wonder what the old man had
done to deserve such punishment and payback. 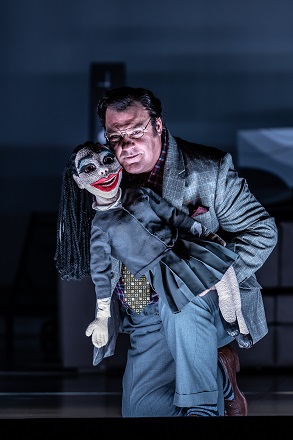 Markus Werber is a suave, handsome schemer – though not necessarily a
convincing ‘doctor’ – and equals Terfel for panache in their patter duet:
all the more impressive as they have to manipulate puppets while scooting
through the syllables – and a neat suggestion that Pasquale is imagining
taking back control while we can see that it’s Malatesta who is really
pulling the strings. The puppets are Michieletto’s solution to Donizetti’s
failure to really integrate the chorus, who don’t appear until late in the
day, and three puppeteers kept us entertained when Pasquale’s servants
reflected on his misfortunes. In the pit, Evelino PidÚ led a vibrant and
well-paced account of the score.

Only the ending seemed a false note. The deception revealed, the humiliated
but humbled Don Pasquale forgives everyone and gives a green light to Norina
and Ernesto’s marriage; he recognises that although Malatesta has tricked
him, the trials of his pseudo-marriage have in fact saved him from his own
stubbornness and the very real disaster that would have ensued had he
actually entered into wedlock with a younger woman. Michieletto eschews any
such happy ending. Here, Pasquale is consigned to a wheelchair and packed
off to a nursing home. An unnecessarily callous final act of cruelty? But,
he has one consolation: he’s still got the keys to the house.