‘[A] fragment, like a small work of art, has to be entirely isolated from
the surrounding world and be complete in itself like a hedgehog, wrote
Friedrich Schlegel (Athenaeumsfragment 206). For Schlegel, the
fragment is ‘complete in itself’ but remains ‘incomplete’: in its
opposition to other fragments within the ‘surrounding world’, it reveals
the world to be a ‘chaotic universality’ of antagonistic elements.

Like Schlegel’s hedgehog, the individual songs of Dichterliebe are
broken pieces, complete in themselves but implying a larger whole, one
which they can never represent. The song-cycle epitomises the negative
dialectic of early Romantic poetry which emphasises possibility rather than
closure and strives, in Novalis’s words, to ‘represent the
Unrepresentable’. The Romantic ‘Self’, too, is fragmentary, never fully
‘knowable’. And, from these ‘gaps’ arises our longing to see and know, a
desire that can never be fulfilled but that we strive to achieve through
art.

One might see Schumann’s music as the poetry of the fragmented Romantic Self.
Piano and voice are autonomous and interdependent; symbiotic
entities seeking the elusive Other. The poems which form Heine’s Lyrisches Intermezzo similarly eschew coherence. The text does not
present a linear narrative, but rather is a self-reflective network of
repeating images – birds and flowers, stars and angels – associated with
love. A sort of dream sequence of suggestion.

So, in some ways the decision by Bernard Foccroulle and Martin Crimp to
view Schumann’s omission of four of his settings of the twenty poems from
Heine’s Lyrisches Intermezzo when he published Dichterliebe in 1844 – another ‘gap’ – as an invitation to
‘intervene … and finally to extend’ is a logical one. Zauberland
begins by presenting the sixteen poems of Dichterliebe, with a
single ‘intervention’, and then takes the piano postlude to Schumann’s
final song as a starting point from which to continue the self-reflective
discourse through a new cycle by Foccroulle which sets poems by Crimp.

It’s a venture which works best at a musical level. After all, Schumann’s
cycle begins falteringly with a melody that seems to have begun playing
elsewhere, before we hear a sound. And often the songs seem to dissolve,
tonality and text unresolved, only to emerge from the silence and continue
their searching in the following song. Foccroulle’s initial translucent
piano textures and gestures of rippling limpidity sit comfortably alongside
Schumann’s inconclusive and harmonically ambiguous utterings. And if
Foccroulle’s language grows progressively more discordant and aggressive,
finding its own voice as its canvas expands, then that seems fitting, and a
natural response to the unfolding text. 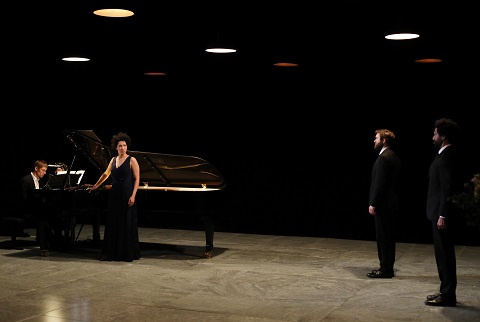 The impact made by the performance of Zauberland in the Linbury
Theatre at the Royal Opera House was in no small part owing to the superb
performances of soprano Julia Bullock and, especially, pianist CÈdric
Tiberghien. Bullock seemed more at home with Foccroulle’s more extrovert
vocal idiom, but sang Schumann’s songs with integrity of feeling, capturing
their increasing darkness. In Tiberghien’s hands, the piano’s cascading
teardrops were hauntingly beautiful, conveying at the start of the cycle
the delicate wistfulness of remembered happiness, capturing the cold
bitterness which creeps in almost imperceptibly, and etching the ambiguous
rhythmic gestures with wonderful clarity.

Crimp’s text, and its dramatic interpretation by director Katie Mitchell,
were less successful. The dreams and fairy tales which pervade the later
poems of Heine’s cycle – when we enter Zauberland where green trees sing
melodies from the beginning of time and vague shapes rise up, a strange
dancing chorus, out of the earth – seem to have provided Crimp and
Foccroulle with their point of departure. Zauberland presents the
journey of a young woman, five months pregnant, who has been forced to
leave Syria and who arrives at a European border checkpoint, hoping to
enter Germany – to her, a ‘magic world’ of security peace. Having left her
husband and family behind in Aleppo, she settles in Cologne where she gives
birth and then resumes her career as a professional opera singer. On the
eve of her husband’s death she has a dream in which her concert performance
of Schumann’s Dichterliebe becomes mixed up with her traumatic
journey from Syria and her life in Aleppo before the war.

At least, that’s what the programme tells me. I would have gleaned little
of this from Mitchell’s staging, which began in the manner of a formal
lieder recital, pianist and singer the only presences on the soft-lit
stage. Then, men in suits entered, in profile. As the drama unfolded, they
undressed and redressed the singer; pushed or carried on, and off again,
chairs, tables, lamps, trees, garden furniture; made shadows dance and
flicker on the singer’s face. A woman in a bridal dress danced by, as the
men used their mobile ’phones to take photographs. Later, glass boxes
containing dolls lying in contorted positions were wheeled in, and off
again. 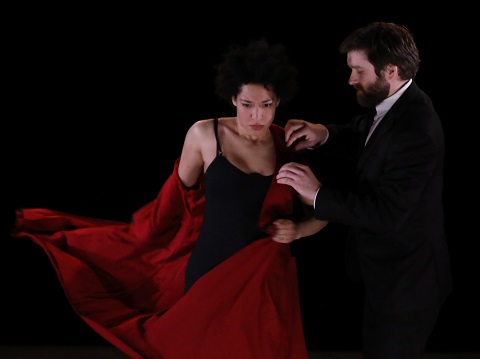 I had no clear idea who these personages were: at times Crimp’s text gave
clues as to location or action, and one might identify a border guard or
medic. But, who was the girl in the wedding dress? The singer’s daughter,
or the singer herself? “Heine – Kraus – rhymer – what does it mean? Why are
these gentlemen in my dream?” the singer asks. Quite. Mitchell’s repetition
of gesture had none of the haunting melancholy of Schumann’s echoes. It was
just dull. And, Crimp may have stayed true to the spirit of Heine’s
imagery, with its ironic parodying of Romantic medievalism, but lines such
as “‘Girls,’ she says ‘have flowers names – heart – rhymes with pain.’” or
“Today I’m trading nightingales for dollar bills – each brown bird sold
brings me closer to escape” are no match for Heine’s hothouse of roses and
lilies, or his magic garden where the nightingales are singing and the
moonlight is shimmering – “es singen die Nachtigallen,/ es flimmert der
Mondenschein”.

Novalis wrote of literary narratives that, like nature itself, are without
coherence and work instead by means of association, like dreams, and whose
effect is like music. Dichterliebe embodies this aesthetic of
fragmentation and survived Zauberland’s attempt to fill in the
gaps.