Given the social and ideological context of our own present, the words of
the German dramatist Georg Kaiser, written at the end of World War 1, might
serve as both a dispiriting reminder and uplifting inspiration.

Certainly, it’s not difficult to see why English Touring Opera’s Artistic
Director, James Conway, thought that Kaiser’s third and final collaboration
with Kurt Weill, Der Silbersee (The Silver Lake), would
resonate with audiences when the company take it on tour around the UK,
alongside another that other sui generis ‘singspiel’, Mozart’s

For while Der Silbersee is both informed by and a critique of its
immediate context, it combines contemporary political allegory on the
condition of Germany in the dying days of the Weimar Republic – it was
premiered on 18th February 1933, less than a month after Hitler
had become Chancellor of Germany – with utopian symbolism that enables it
to transcend that context. Der Silbersee thus both addresses the
condition of a historical present and articulates Kaiser’s ambition of
saving the future, through social solidarity and reparation for injustice;
and, the power and relevance of its promise of a better world will surely
never cease.

That said, the contemporary reception of Der Silbersee suggests
that its utopianism can’t easily be ‘disassociated’ from its specific
historical moment. Following the Magdeburg premiere there were complaints
from community organisations about ‘the degradation of art to the
one-sided, un-German propaganda of Bolshevist theories … This play preaches
the idea of class hate and contains innumerable open and veiled invitations
to violence,’ while the Nazi newspaper Leipziger Tageszeitung
sneered: ‘Kaiser, though not himself a Jew, belongs to the circle of Berlin
literary Hebrews. His latest clumsy piece of staged junk is called Der Silbersee and has ‘music’ by Weill.’

Later, the writer Hans Rothe recalled the Leipzig premiere: ‘Everyone who
counted in the German Theater met together for the last time. And everyone
knew this. The atmosphere there can hardly be described. It was the last
day of the greatest decade of German culture in the twentieth century. The
Nazis’ barracking and yelling were somewhat disturbing.’ Indeed, the
simultaneous productions in Leipzig, Erfurt, and Magdeburg were suspended,
Weill departed shortly afterwards for the US, and there were no public
performances of Weill’s music until the war had ended.

The challenge that Conway must rise to, then, is to respect Der Silbersee’s explicit refutation of the prevailing political
trend of its time, while also communicating the ongoing relevance of its
promise and embodiment of social transformation. We must understand the explicit darkness which Der Silbersee satirises and
challenges, and also connect such shadows with those that darken our own
disturbing days. It’s no easy task, and Conway is, I feel, only partially
successful – but that’s in no way to diminish the dynamism and conviction
of his production.

The work’s full title is Der Silbersee: Ein Winterm‰rchen
, ‘a winter’s fairytale’ alluding both to Shakespeare and, significantly
for its German audience, to Heinrich Heine’s 1844 satirical poem. Deutschland: Ein Wintermarchen. And, the action truly takes place
in a ‘winter of discontent’: Kaiser’s libretto is peopled by the hungry
dispossessed and rapacious capitalists whose policy of over-supply keeps
prices high. Food banks and Lehman Brothers, anyone? 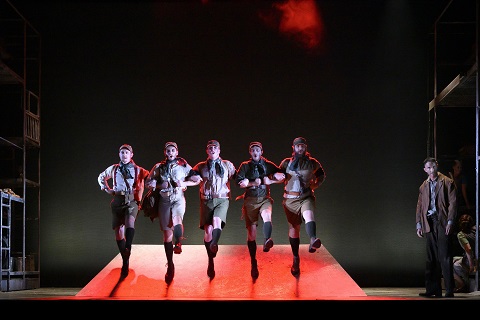 The action begins with Severin and his unemployed, starving comrades
symbolically assuaging their hunger by burying a life-size doll. When they
raid a grocery store, Severin is shot by Olim, a policeman, who,
discovering that his victim has stolen only a pineapple – a token of
aspiration rather the sustenance he needs – feels remorse and determines to
make recompense by falsifying his report and resigning from duty. When he
wins the Lottery, Olim buys a castle (a symbol of the Weimar state),
installs Frau von Luber (a representative of the old Wilhelmine order) as
housekeeper and devotes himself to serving as Severin’s anonymous
benefactor. The latter, confined to a wheelchair, rages with vengeance
towards his assailant. The intrigued Frau von Luber engages her penniless,
guileless niece Fennimore to spy on Olim and Severin, and discovering
Olim’s secret she blackmails him into signing away control of his property
to her. Olim and Severin are expelled from the republic, in a winter
snowstorm, and head towards the silver lake where they risk drowning in
suicidal despair. However, Fennimore, who has brought about a
reconciliation between the two men, explains that ‘whoever must continue
will be carried by the Silver Lake’. Though it is spring, the lake has
frozen over, and Olim and Severin are able to escape to a new world. 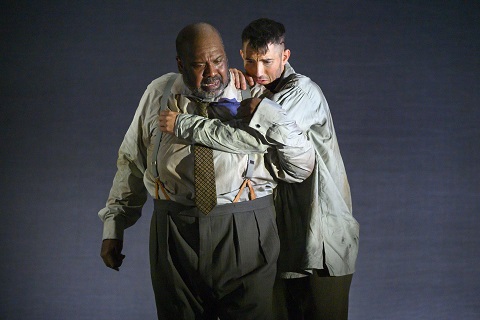 One of the challenges is how to deal with Kaiser’s lengthy text. When Der Silbersee was performed at the Wexford Opera Festival in 2007,
director Keith Warner used Rory Bremner’s English translation of the
complete text, but several critics found the ratio of spoken words and song
unbalanced and in favour of the former. Except for the choral items which
are sung in English, Conway and conductor James Holmes retain the original
German for the sung numbers – a sensible decision as it foregrounds the
historical particular – and have written a new, abbreviated English text
for the narration, which is spoken by Bernadette Iglich. However, Conway
throws the emphasis back on the ‘play’ at the expense of the ‘song’, by
rejecting conventional surtitles in favour of Brechtian placards and
banners, scrolls and even tickertape, upon which translations of the lyrics
are stamped and scribbled. The problem is that as our eyes cast around Adam
Wiltshire’s folding-scaffold set, searching in the gloom for the next cue,
where the words are becomes more of a preoccupation than what they are saying.

This is particularly detrimental to the impact of the Chorus, whose
interjections – as Brecht would have intended – are designed to both
influence and articulate our own views: as when, for example, the Chorus
persuade Olim to resist the allure of the Lottery Agent’s promise of
compound interest in favour of altruistic investment in the common good.
However, as Shop-girls, Grave-diggers and disaffected Youths, the Ensemble
and Streetwise Opera make a strong-voiced chorus and deliver Bernadette
Iglich’s choreography with vitality, complemented by Holmes’ slick
direction of the instrumentalists, though the latter’s tone might have had
a little more grit and grain. 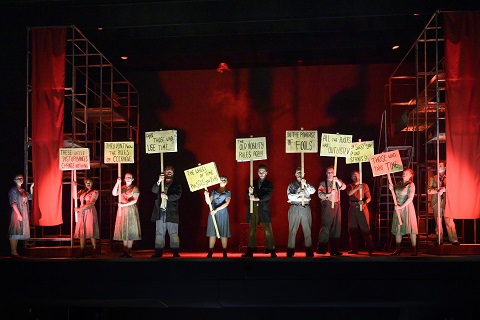 Kaiser’s drama is driven by the transformation of the characters’
motivations, but it might be argued that in defining his protagonists the
librettist relies less on psychological realism than on the emblematic
depiction of social developments. Indeed, the Austrian director and actor
Heinrich Schnitzler complained that Kaiser’s characters ‘often suddenly
cease to be characters and only speak with Georg Kaiser’s mouth and brain
about abstract philosophical and sociological matters’.

The ETO cast do, however, succeed in communicating credible feelings and
motives. David Webb made Severin’s anger palpable and his singing was taut,
while Ronald Samm’s Olim was appropriately reflective, his baritone languid
at times but always gracefully solemn. Clarissa Meek avoided the temptation
to turn Frau von Luber into a pantomime wicked witch; James Kryshak was a
slick Lottery Agent and, as Baron Laur, joined the castle-commanding Frau
in a deliciously wry duet celebrating the restoration of the old order –
pointedly named ‘Schlaraffenland’, the fool’s paradise. Rising above all –
quite literally at the close when she delivered her aria of reconciliation
– was Luci Briginshaw’s Fennimore, whose sweet, light soprano perfectly
captured the dream of liberation. 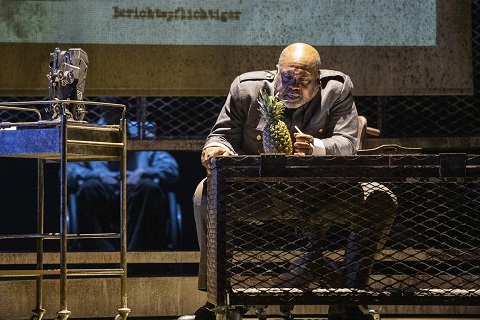 Historically, as we know with hindsight, Kaiser’s utopia remains just that,
even though his play ends with a ‘miracle’. And, so the ending poses
further challenges, for while Der Silbersee is a social commentary
it is also a fantasy, and a production must create a gradual transition
from realism to symbolism. In this way, Der Silbersee is closer to Die Zauberflˆte than to Die Entf¸hrung aus dem Serail.
Conway’s solution is to drape his cast and chorus in silver-foil cloaks,
but this does not really effect a mediation between life and dreams, such
as Shakespeare achieves in A Winter’s Tale, when Paulina summons
the ‘statue’ of Hermione to life: ‘ Music, awake her; strike!/ ‘Tis time;
descend; be stone no more; approach;/ Strike all that look upon with
marvel.’

Kaiser prophesied: ‘The music to Der Silbersee is something
immortal, because art lives longer than all politics.’ Can we, today,
believe in Der Silbersee’s concluding promise of escape and
redemption? That, through the intervention of fate and the wheel of
fortune, the hours of night will give way to the dawning of the light? Does
our present foretell of future catastrophe, or can the social collectivism
which Kaiser and Weill espouse ‘save’ us? I’m not sure that Conway makes us
ask, or answer, this question, but if a production of Der Silbersee is to transcend its specificity then surely it must?

I suspect, however, that Der Silbersee has irreconcilable feet in
both past and present; moreover, present-day German audiences surely
respond differently to its historical particulars, in ways not accessible
to Anglophone audiences. That said, audiences around the UK should be
grateful to Conway and ETO for the opportunity to reflect on such matters.
Can we transform ourselves and our world? Does the future offer hope?