This October 1 performance was the only one of the seven performance run entrusted to Egyptian-born soprano Amina Edris as Juliet. With Gounod’s famed “Je veux vivre” Mlle. Edris took command of the stage, revising this aria from its usual status as a soprano showpiece to become the portrait of a young girl full of life, ready to fall in love. Mlle. Edris possesses a beautifully colored, burnished tone, rare for a lyric coloratura soprano, her voice fully capable of sailing through the brilliant coloratura to create a freedom of spirit that we know will soon be crushed.
And fall in love at first sight Romeo did, pouring out his feelings in “Ange adorable,” and opening the second act with the famed “Ah! leve toi soleil” flawlessly sung in well-focused, beautifully colored tone. Then the tender duet “O nuit divine, je t’impore” begun and concluded by the smitten Romeo in lovely pianissimos, the scene in which Juliet gives herself to Romeo.
Tenor Pene Pati came into this beautifully finished voice for Gounod’s Romeo over the seven performances. I first heard the Somoan-born tenor in the third performance of this run. I was not persuaded that his voice possessed a convincing intonation though it was lyrical and elegant singing, and most of all it was very secure, youthful singing by an appealing and highly communicative artist. And tenor Pati did indeed provide sufficient foil for the vocal fireworks of the Juliet, sung by young opera star Nadine Sierra at this performance.
I heard Pene Pati’s Romeo a second time (the fifth opera house performance) at Opera at the Ballpark sipping $15 margaritas and munching garlic fries. There were more than 15,000 of us at this 12th annual simulcast of a War Memorial Opera House performance onto the gigantic scoreboard of the SF Giants ballpark. The audience is a cross section of San Franciscans, opera aficionados to be sure, and even the “why not wander in — it’s free!” Astonishment at the discovery of opera is sometimes uniquely expressed at the ballpark — “This is better than a f***in’ ballgame!” was a men’s room exclamation I overheard. 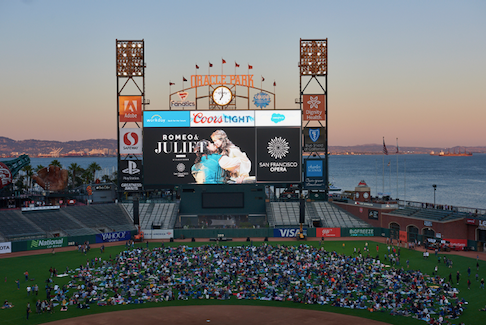 While the transmission of the voice of soprano Sierra to the ballpark was flattering, and the virtuosity of this brilliant young singer was even more apparent than in the real acoustic of an in-house performance, Pene Pati’s transmitted voice lacked much of the warmth that I had heard a few days before in the opera house. Though, remarkably, his strong and secure high C at the end of the Act III banishment sextet surely set a new record for high C home-runs.
At this final performance in the opera house with the Juliet of Mlle. Edris tenor Pati may have held the high C even longer than at the ballpark. But most striking was his discovery of a natural flow for the lyricism of Gounod’s ill-fated lover, the young tenor finding Romeo’s poetry without superfluous emotive emphasis and without mannerism. It was pure bel canto, and pure poetry.
With Mlle. Edris tenor Peti delivered the famed duet “Nuit d’hymÈnÈe” with unfaltering elegance, both singers revelling in the bel canto of their love. And finally Romeo’s wrenching “Salut! Tombeau sombre et silencieux” held true to the lyricism of Gounod’s musical line, the drama of Shakespeare’s tragedy laid bare in the beauty of young love, not in its angst.
It is true that Romeo is the voice of Gounod’s expressive poet, and that Juliet is the tragic victim of this love story. She must take the sleep potion offered her by Friar Lawrence to simulate death, and suffer the angst lying in the family mausoleum near her slain brother Tybald who, she imagines, demands that she reject Romeo. These, then, are the most dramatic moments of the opera, moments that are opportunities to amplify the work’s emotional outpourings into virtuoso operatic display. Mlle. Edris did not forsake the innocence of character she had created. While easily meeting the challenging technical demands of the poison aria (“Amour ranime mon courage”) she as well quietly underlined her angst by descending into a chest voice, almost spoken, from time to time.
This last performance vindicated a masterpiece status for Gounod’s RomÈo et Juliette. Canadian conductor Yves Abel built plateaux of orchestral lyricism that clearly inspired the ill-fated lovers to find Gounod’s poetry. Or perhaps it was that these two young artists inspired the maestro to create this world of innocence and musical beauty.
Not that the maestro did not foment the tensions to the utmost in the Act III fight scene, here noisily encouraging Juliet’s brother Tybald to skewer Mercutio, sung by Lucas Meacham, who had let loose with a Figaro-gone-mad act that truly needed to be silenced.
For my full September 19 review of this production please see RomÈo et Juliette at San Francisco Opera.
Michael Milenski