First up is Gluck’s Orpheus and Eurydice, in neither its 1762
Viennese nor 1774 Parisian manifestations, but rather in Hector Berlioz’s
1866 rearrangement, in which the French composer amalgamated,
re-orchestrated and re-wrote the part of Orpheus for mezzo-soprano
(specifically, for Pauline Viardot-Garcia).

But, in fact, what ENO really offers is not Gluck’s opera, but
director-choreographer Wayne McGregor’s dance-opera. Of course, dance is
integral to Gluck’s opera and aesthetic. One critic at the first
performance of Orpheus praised the dancer-choreographer Gasparo
Angiolini for ‘uniting choreography with the choruses and the story in such
a way as to give the performance an appearance no less splendid than
exemplary’. The visual aspect of the work was no less vital and
the crucial in this regard was the influence of Count Durazzo – ambassador
to the Viennese court, and from 1754 director of the city’s imperial
theatres – in engaging not just the ballet-master Jean-Georges Noverre but
also the scene-painter Giuseppe Quaglio whose designs contributed
substantially to the success of Gluck and librettist Calzibigi’s opera.

Indeed, Gluck’s Orpheus is inherently classical in its fusion of
the musical, linguistic, visual and gestural. The composer’s aim was not so
different from that, one hundred years later, of Nietzsche and Wagner: the
revival of classical Greek tragedy through a synthesis of the arts in
accord with the ancient Greek’s principle of orchestique: the
incorporation of dance and gymnastics into theatre. So, it’s not surprising
that choreographers from Isadora Duncan to Frederick Ashton to Pina Bausch
have been drawn to Gluck’s opera, aiming to visualise the music through
physical movement and bodily gesture. 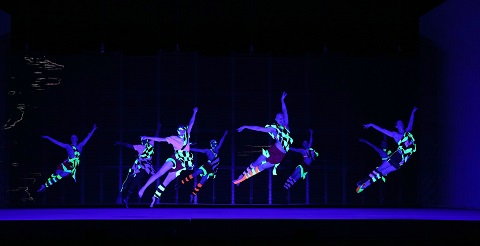 Bausch conceived of three dancers’ roles to perform alongside Gluck’s
characters, and McGregor nods in this direction, with two of the fourteen
dancers from Studio Wayne McGregor, Jacob O’Connell and Rebecca
Bassett-Graham, seeming to serve as avatars for Alice Coote’s Orpheus and
Sarah Tynan’s Eurydice respectively. At times, the dancers successfully
evoke the characters’ circumstances and imagined feelings – as when, upon
the death of Eurydice, O’Connell is pinned to the floor by the Furies until
the latter are charmed by Coote’s song and release their captive.
Similarly, the final reunion of the mortals is touchingly expressed in a
physical duet which embraces the singers’ bodily forms too. 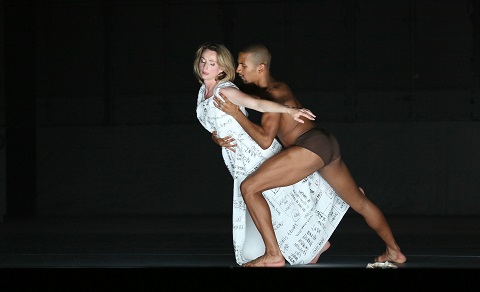 However, all too often the danced mimes and extended choreographic
sequences do not, to my mind, bring about a union of movement and
music. While McGregor’s choreography is expressive in its own right, and
some of the characters’ thoughts and feelings are exteriorised through
movement in a general way, there seemed to me to be little attempt to give
corporeal form to the emotions and ideas that are expressed by Gluck’s
musical rhythms. Moreover, McGregor seems uninterested in the singers
themselves, despite song being at the heart of the materialisation of the
opera’s ideological foundations. And despite having three terrific
singer-actors with whom to work. There is practically no ‘direction’ of the
cast, while the Chorus – in excellent voice – are consigned to the shadows.
Surely, the latter’s interaction is central to the drama? They are far, far
more than just a disembodied sound? By down-playing the importance of
Gluck’s music and concentrating solely on the physical and the visual,
McGregor undermines the very essence of the opera, shifting our attention
away from the sonic beauty and power of Orpheus’s song.

Moreover, ‘visual’ here refers to light and costume. There is no ‘set’ as
such, though the cavernous black hole of the ENO stage serves as a fitting
representation of hell, even if it doesn’t provide much context or acoustic
support for the singers. Instead, designer Lizzie Clachan relies on Jon
Clark’s lighting and Ben Cullen Williams’ video projections to indicate
situation and mood. So, when Eurydice dies and descends, it’s not so much
to the Underworld that she is heading, rather under-water, as
indicated by the projection of rippling waves above a yellow-tinted glass
tank in which Eurydice is suspended in the manner of a Damien Hirst shark
floating in formaldehyde. The reason for her death is also obscure: she
seems to proffer her arm up willingly to the deathly syringe (snakebite?),
twice, and appears to have left behind a suicide note.

Initially Louise Gray’s costumes are monochrome: Eurydice wears a bridal
gown scrawled with instructions such as ‘Do not look’ (so, why does she get
so upset later when Orpheus does as he’s told?); the dancers sport
skull-embroidered leggings; Coote is forced to don a shapeless sack-dress
graffitied with random words and phrases – ‘deprivation’, ‘tendre amour’
‘underground’. What is the point of such redundant gimmicks? 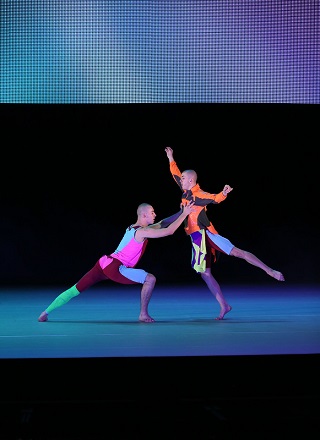 The slide down to Hades is marked by an eye-blinding red-and-green light
show – a sort of sonic-kinetic visualiser – and the dancers spice up their
skimpy costumes with day-glow legwarmers and stripes. Were the Furies
confronting Orpheus with his own sexuality? Asymmetrical clashing primary
colours – and a tender pas de deux for two male dancers – mark the
harmony of the Elysian Fields. Coote and Tynan are left to their own
devices in the final Act, the only directorial-design ‘assistance’ being a
sequence of projected squares and rectangles of analog noise: the fact that
random, flickering dot-pixel patterns of

indicate a lack of transmission seemed ironically apt – they are of no
relevance at all to the tragic drama to which the singers are giving voice. 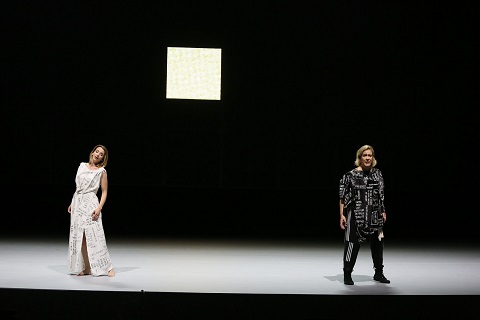 The three soloists coped gamely with the directorial tabula rasa. It was
announced that Coote was suffering from a viral infection, but while Act 1
felt a little effortful, ‘Che farÚ senza Euridice’ was intensely
expressive. Gluck himself remarked that ‘Nothing but a change in the mode
of expression is needed to turn my aria “Che farÚ senza Euridice” into a
dance for marionettes’, and Coote demonstrated the capacity that Gluck
implies a fine singer possesses to make his apparently simple music almost
painfully affecting. Sarah Tynan’s Eurydice burned with credible human
emotions which were delivered with luminosity and strength. As Love, Soraya
Mafi phrased Love’s guidance and entreaties with grace and silkiness.

Conductor Harry Bicket set off at a furious pace – perhaps determined by
choreographic necessities? – and pushed hard throughout, seldom taking time
to bring the details of Berlioz’s orchestration to the fore.

Those who want to see talented dancers perform interesting choreography
will enjoy McGregor’s Orpheus and Eurydice. Those who want to hear Orpheus’s loss, rather than see it, will be less
satisfied.