The instrumental colours were vibrant, the textures clear and crisp; the
transparency allowed us to appreciate the inventiveness, and dramatic
expressiveness, of Mozart’s contrapuntal writing. Rushing string scales
flew with a flourish, martial motifs danced merrily, and the prevailing
animation and blithe spirit was tempered by judicious grace and sincerity.
This was some of the best playing I’ve heard from the ETO Orchestra
characterised by excellent intonation, uniform string style and plentiful
lovely woodwind colouring.

Andrews was faithful to the invention and variety of the score. Blonde’s
authoritative chastising of Osmin at the start of Act 2, as she pummelled
him on his table-turned-massage bench – tender coaxing may conquer a gentle
maid’s heart, but surly commands will get him nowhere – was made wry by the
beautiful softness of the strings’ accompaniment, and still more piquant by
the dry staccato of their subsequent duet. The gentle sincerity of the
final quartet, in which the forgiven escapees honour Pasha Selim’s
benevolence, dwelled sensitively then swelled heart-warmingly. Andrews made
no small contribution to the really lovely Mozartian style that we enjoyed. 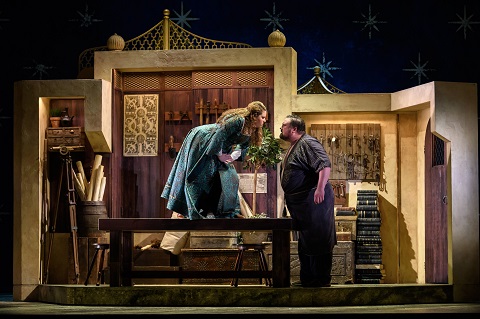 Act 1 opens in Osmin’s estate-manager office in Act 1, set against a starry
night-sky backdrop. Ottoman learning makes its presence lightly felt, via
the trunks, piles of books, telescopes, tapestries and tools that line
Osmin’s walls. He is no mere harem-keeper or rough boor: rather, he is the
overseer of the Pasha’s property, a man of clout, cleverness and status.
Wiltshire’s set swivels to reveal the Pasha’s harem: a glittering aviary of
gilded arches for his cantabile concubines. One further twist, in Act 3,
takes us to the pristine heart of the Pasha’s palace.

Medcalf’s energetic direction is not overly fussy: the characters are
always on the move, looking through doorways and windows, circling and
swapping places, but this seems a natural physical manifestation of
Mozart’s busy counterpoint. Moreover, the cast’s choreography is perfectly
timed: if there is little room for spontaneity then the rigorous rehearsal
will serve them well on tour. The extended quartet at the close of Act 2 is
a perfect example of their accurate agility: the two angry women, accused
of infidelity by their ungallant beaux, switch back and forth with the
grace of a pair of doves, indignation and accusations swirling. If the
scene does not quite equal the dramatic transition effected when the Count
begs forgiveness of his maligned Countess in the final Act of Figaro, then the number is discerningly executed. Andrew Porter’s
English translation is very clearly sung and spoken, amusing with its deft
rhyming couplets and occasional blunt colloquialisms.

Die Entf¸hrung
was Mozart’s ?rst great public success in Vienna, first performed at the
city’s Burgtheater on 16 July 1782. The vocal virtuosity it demands of its
cast is a result of the stellar singers at Mozart’s disposal at the
National Singspiel, including Johann Ludwig Fischer (the ?rst Osmin) and
Catarina Cavalieri (the ?rst Constanze) – whose ‘flexible throat’ Mozart
had admired in a letter to his father of 26th September 1781. 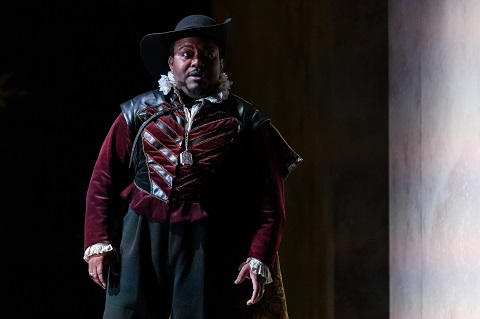 The ETO cast were equal to the challenges. Indeed, the role of Osmin seemed
tailor-made for bass Matthew Stiff, who managed to be simultaneously
imposing and foolish, nasty and pitiful. Even when insulting the hapless
Belmonte in Act 1, this Osmin’s elegance of line and beauty of tone
intimated a dignity beneath the derogatory rudeness. It didn’t matter how
high or how low Stiff’s bass was asked to venture, his tone was attractive
and expressive, agility complementing basso profundity. Perhaps alone among
the cast, Stiff transcended character stereotype: we could sense a real,
human dilemma, as desire battle with duty, and an innate misanthropy
resulted in personal misery. Stiff’s Osmin was certainly menacing and
brusquely short-tempered – slipping with delicious ease into a roll call of
the panoply of punishments he wishes to inflict on his foes, whom he dreams
of slaughtering and quartering. But, he also had a heart that he, perhaps
unwillingly, exposed and with which we empathised.

I haven’t always found John-Colyn Gyeantey’s tenor to be firm and focused,
and he’s no natural stage animal; but Gyeantey has a surer feel for comedy
than for the tragic tone and was well-directed here by Medcalf. Indeed,
Belmonte is not an easy role, and somewhat passive: as Blonde, Pedrillo and
Osmin ‘act’, so he hangs about waiting for a rescue-bid that others
organise for their ‘conquering hero’. Gyeantey was a slightly cautious
Belmonte, but his stage capers with Osmin and Pedrillo were niftily
executed. His diction was clear, though his divisions were not always clean
and at times he fell behind Andrews’ nimble beat. If his romantic effusions
were not always suave then the tenor conveyed the sincerity of his love for
Constanze most touchingly at times. Occasionally there was a tendency to
try to make too much of the words, thereby disrupting the lyrical flow of
the line: Gyeantey could just let Mozart’s phrasing do the work and more
effortlessly achieve a shapely legato line. But, he offered some attractive
singing and well-centred characterisation. 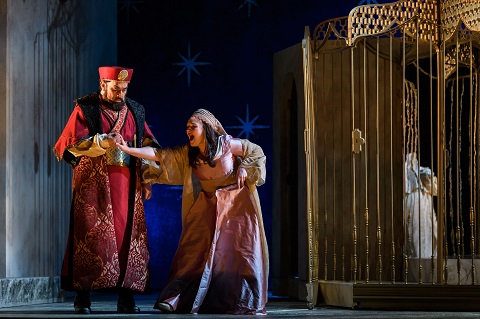 Constanze is probably one of most challenging soprano roles in the standard
repertoire, and Lucy Hall’s essay of the musical mountains was admirable.
Although she leapt with impressive accuracy to the peaks of her Act 1 aria,
in which she reiterates the strength of her love for Belmonte, there was a
little tightness as she ventured upwards, but subsequently she demonstrated
stoical grace, vocal stamina, and by Act 3 the translucent shine was
certainly glowing.

Nazan Fikret’s Blonde was not a maiden one would want to mess with:
confident, subtly comic, she reached to the extremes of the role’s extended
vocal expanse with ease. As Pedrillo, Richard Pinkstone was appealingly
chirpy of manner and spirited of vocal tone; his lovely romance, sung while
balancing on the rescuers’ ladder, was a masterclass in less-is-more
communicativeness. Alex Andreou was a firm, fierce but fair Pasha: his
latent majesty and menace would certainly have worried Belmonte, but he
demonstrated reflectiveness and a truly regal beneficence. The four-strong
ensemble were well-drilled, dramatically and vocally, and their gracious
decorum – as guardsmen and concubines – contributed to the consistent tenor
of the whole. 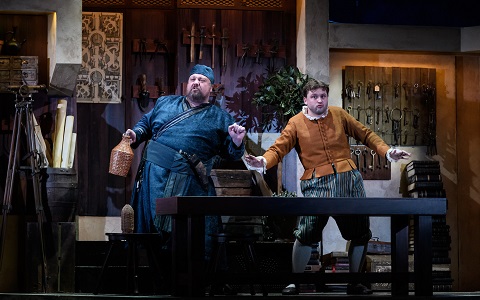 Poor old Osmin receives much (unwelcome) moral guidance in the closing
moments: having been admonished by Pasha Selim that it is better to show
justice and forgiveness than to punish one crime with another, he is then
reminded by the forgiving quartet that a noble heart does not concern
itself with vengeance. Medcalf largely avoids acknowledging the intrinsic,
and undeniable, European triumphalism of the Singspiel, in which
enlightened Western values conquer a degenerate and demonised Orient. And in this regard it’s worth remembering that Pasha Selim is
not ‘converted’ to Western liberalism: he is a renegade Westerner
who has taken refuge in Turkey, taken up the Islamic faith and risen by
merit: were he of Oriental origin – as Osmin’s example illustrates
– he would, according to eighteenth-century opinion, be immune to the
forces of Enlightenment.

Medcalf doesn’t really show us the way that Mozart’s music humanises the
libretto’s stereotypes. This is a light and lively Seraglio,
rather than a philosophically profound exploration. But, perhaps there is
rather too much to ponder and worry about in the world at the moment, and
Medcalf is wise to encourage us just to sit back and enjoy Mozart’s musical
tale of love lost and found.