Glass’s revision of Music with Changing Parts, which premiered in
New York in 2018, doesn’t fundamentally alter the musical patterns, those
propulsive rhythms or the sense of predictability in a work which is always
unpredictable – what has changed is the lack of astringency, the greater
range and just different sounds in a revision which places it between two
poles of Glass’s creative output.

If there is one thing which Music with Changing Parts does display
it is a discipline to the intricacies of how every bar, every phrase and
every line are carefully processed, even if you’re hearing the same ones,
multiple times. This is the Boulanger effect on Glass’s early music. But
what is equally striking about this particular piece – and this remains
true whether you hear it in the original or the revision – is a debt to
Stockhausen, if not consciously inspired then certainly as a musical
parallel. The Glass of Music with Changing Parts is about the
geometry of patterns, the polyvalent, unpredictable randomness which runs
through a piece like Klavierst¸ck XI, the clusters of electronic
sound which reach a colossal apex and the psychoacoustic effects of voices
which recall Stimmung, a work written just a few years before in
1968. What the revision does, and does so well, is turn Music with Changing Parts into an almost full-blown choral piece,
and in doing so expand on those overlayered voice frequencies, the
kaleidoscopic complexities of long and short vocal sounds into something
significantly more minimalist and hypnotic than one usually experiences in Stimmung.

As the title of the work suggests there is nothing fixed about the
orchestration of Music with Changing Parts. If I recall, the 2005
performance at Tate Modern used significantly more players than the Philip
Glass Ensemble had used on their ground-breaking recording of the work in
1971. Whilst doubling of instruments is an option (as it was for the
recording) what the revision does is to simply expand the number of players
and instruments (beyond the normal keyboard and woodwind). For this
particular performance, that was two horns, two trumpets, a flute, a tenor
trombone and a bass trombone. What this does to the tone of the
work is to markedly change its musical direction. It can, in one sense,
just sound much less radical, much less primitive a score – much of the
asceticism has been torn from its pages, its landscape less jagged and now
more sensuous, almost opulent. The colours aren’t as shocking or vivid as
they once felt; now they seem more tenebrous. In a work which sometimes
seemed it was striding multiple musical genres, from minimalist classical
to quasi-symphonic clusters of rock (at one time, I rather thought some of
this music resembled the cumulative, kinetic power of Santana’s Soul
Sacrifice – the 1969, psychedelic Woodstock version, that is), it now
sounded comfortably, and eerily, closer to Akhnaten. Not a bad
thing – just a different aural experience.

Originally, the use of voices in Music with Changing Parts was
strongly tied to the improvisatory geometry of the work – and those voices
were in every sense unwritten. The words had no structured meaning, they
occurred only at breaks in the playing – and those breaks were themselves
determined by the players, not by the score. The notes given out for this
performance didn’t make anything clear (in fact, Mr Glass was extremely
minimalist in telling us anything about what we were going to hear) so what
follows is largely based on how I heard it. 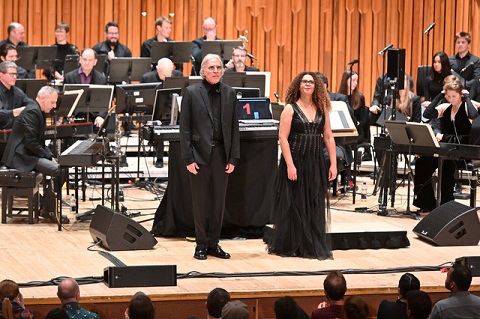 If the fundamental randomness of the instrumentation remains largely
untouched – that is, patterns of varying lengths, repeated as often as a
musician wants – the choral writing is a whole new layer in itself. The
momentum is clearly forward-looking, each section sounding different to the
previous one. The chorus is divided – and part of the work’s spectral
unpredictability is that often only the left or right chorus will sing –
though sometimes one experiences the chorus in unison. Quite how far the
impact of this is random, of whether the ear will ever be tuning in to one
side or the other, to a stereophonic or a more monophonic distribution of
sound, is difficult to tell. A choral conductor suggests this is entirely
possible. Glass has also opted for a children’s chorus, which if it seems a
touch Mahlerian is actually much more inventive. If this is now a work
which is about contrast and depth, about the possibility of range and tone,
the layers in it have become enmeshed in quite complex textures. The rhythm
remains entirely uniform – what feels alien to the original Music with Changing Parts is an exploration of different pitch
than we have in the later version.

The performance itself was beyond first rate. If I clearly heard parallels
with some of Glass’s later works (especially the operas after Einstein on the Beach) this was an incredibly hypnotic experience.
The biggest irony of Minimalism is that its simplicity masks huge
complexity. What can seem structurally slight is actually vast in scale. It
would be easy to take the virtuosity of the Philip Glass Ensemble for
granted, but the concentration, especially from the keyboard players (Lisa
Bielawa, Nelson Padgett and Mick Rossi), was of an exceptional quality.
This was the kind of performance you were transfixed by – something you
watched as well as listened to. This often went beyond music into a kind of
visual art.

The London Contemporary Orchestra, who provided the brass players, were
entirely immersed in this music. I warmed especially to the dark trombones
(Iain Maxwell and Dan West) as well as the piercing and bright trumpet
playing (Katie Hodges and Dave Geohagen). The Tiffin Chorus had, I think,
something of a challenging evening – but this was a performance which
lasted for ninety rather intense minutes. Glass makes few, if any,
allowances for the fact that huge amounts of this score is to be sung by
children. Much of the rapid repetition of same-note patterns, the varying
length and intensity of the notes themselves, the shifts in register or the
apparent discretion of the choral conductor were all taxing on them, but
they acquitted themselves very well.

At times one sometimes felt that the audio and sound engineering (Ryan
Kelly and Dan Bora) felt a touch over reverberant, especially when
capturing the voices of the Tiffin Chorus. It was possibly meant to be
deliberate. The theory is that Glass came to compose Music with Changing Parts precisely because of the effect of
reverberation he heard in a performance of an earlier work. Distraction in
this case may well have been purposeful effect. It did little in the end to
weaken a performance which had been masterfully conducted from the keyboard
by Michael Riesman and the choral conductor, ValÈrie Saint-Agathe.

The question one might ask after hearing this concert is whether Philip
Glass intends this revision of Music with Changing Parts to
completely supplant his earlier version. His notes were elusive about this,
and I don’t know the answer either. Musically, it was a superlative evening
– and I think compositionally it improves on the original. Performances of
the latter were a rarity; perhaps this will change that.