Alongside masterly direction, Jan·?ek’s vibrant score was fabulously well
served by the WNO orchestra on opening night, and the array of impressive
performances on stage was especially memorable for the talent of
award-winning northern Irish soprano Aiofe Miskelly in the title role.

With a libretto based on the exploits of a wily fox illustrated in a Brno
newspaper in 1920, Jan·?ek’s opera offers a refreshingly simple plot in
which a young vixen is captured by the local Forester. After killing his
hens, she escapes, marries, rears a family and, in a moment of provocation,
is shot by a poacher. While this is no cosy fireside fable, its bittersweet
fairy-tale world is filled with larger than life woodland creatures whose
brief lives are inextricably linked with their human counterparts. It
engages on several levels, firstly in the symbiotic connection between man
and nature, and secondly in the relationships between animal and human that
generate a deeper commentary on the cycle of life and death and the
inevitability of renewal. Of this universal and timeless reality Jan·?ek
would have been acutely aware when he began composing the work just two
years before his seventieth birthday. To this ‘personal meditation on the
brevity and fragility of existence’, to borrow from Philip Ross Bullock’s
programme article, the composer responds with music of intense lyricism and
restlessness.

Beyond the pantomime-like caterpillar (complete with concertina), cricket
and dragonfly are themes of sexual awakening, regret and time passing that
underpin a work Jan·?ek referred to in a letter to his muse Kamilla
Stˆsslov· as ‘a merry thing with a sad end’. This tragic aspect is leavened
by the arrival of new beginnings, so touchingly delivered near the end when
the Forester meets a grandchild of a frog encountered in Act One and one of
the vixen’s daughters – both poignant moments of vanishing youth. Not far
from its jaunty and simultaneous pastoral surface are subsidiary ideas on
freedom, socialism and the empowering of women – wittily dealt with when
the vixen dreams of freedom, scolds the hens for their subservience to the
cockerel, and later evicts an indolent badger from his sett. 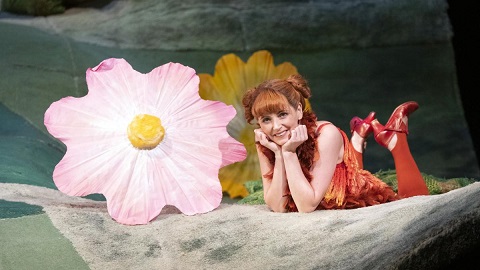 The whole is amply thought-provoking, but its concepts are all conveyed
with a light brush. For those who are persuaded by spectacle, there’s
plenty; this visual feast repeatedly draws the eye to silhouetted hills
(set against deep blues and pinks), patchwork quilt landscapes (snowy
sheets reminding us of the harshness of nature) and cutaway dwellings for
the Forester’s cottage and local pub where the ageing schoolmaster and
priest share lost opportunities. Gossiping birds suspended from the ceiling
tell tales of other creatures in the community, one condemning a starling’s
promiscuous daughter for being ‘a filthy slapper’. The massacre of the hens
(dressed as charwomen) is brutal and the shower of red leaves as each one
is slaughtered is a nice imaginative touch.

If sparkling wit and charm provide atmosphere for this production, it’s
driven by a strong cast including some well drilled school children. Above
all, it’s Aiofe Miskelly as the feisty vixen Bystrouöka whose clear-toned
soprano and gleeful presence is a perfect match for this role and equally
convincing whether brazen or maternal. Hers was a portrayal glowing with
humanity and if she overshadowed Lucia Cervoni’s eager fox, their duet was
a special joy. Claudio Otelli, as the Forester warmed to his role and gave
an impassioned closing soliloquy as he fondly recalled his younger self.
There was much to enjoy too from Peter van Hulle’s lonely Schoolmaster,
Wojtek Gierlach’s dignified Parson and David Stout’s unsentimental poacher.
A host of fox cubs, creatures winged and of the four-legged variety also
left their mark.

Down in the pit Tom·ö Hanus directed his WNO forces with flair,
bringing out the score’s vivid detail and energy, allowing individual
players their moments in the sun, yet keenly alert to balance. In short,
it’s a must-see production bursting with life.