My preparatory research in advance of Emma Rice’s new production of
Offenbach’s Orpheus in the Underworld at English National Opera
was inauspicious. Her dismissal of opera as an artform, in an interview in The Guardian in 2012, together with her recent remark to the
newspaper’s associate editor (culture)

that after agreeing to take on the production she found herself thinking,
“‘Bloody hell, how do I get through this?’ It would be easier if I knew how
to read a score”, didn’t inspire confidence.

Pre-performance, a programme article informed me that Rice’s starting point
for re-writing the spoken text of the libretto – the new English lyrics
have been supplied by Tom Morris – had been to put the French text through Google Translate and that, as she chopped and changed the opera,
particularly Act 2, ENO’s Artistic Director Daniel Kramer had had to remind
her, “let’s get the music back in. We are an opera house!” Returning to the
score Rice seems to have been quite surprised to find that “yes, there was
all this lovely music I’d left out so back it went in and I cut a lot of
the text I’d written”. Not enough of the latter, was my post-performance
assessment. 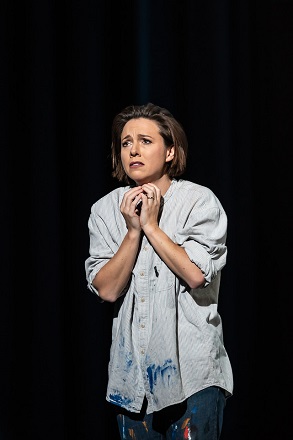 Rice seems to have taken the fact that Offenbach didn’t leave us a
definitive score as evidence of a schism in the Werktreue pact
between composer and performer, and as licence to act as co-creator and
‘rectifier’. “I started to look at the two-act and the four-act versions
and at the three English translations of the libretto that I found. None of
them said what I wanted to say.” What about what Offenbach wanted to say?

Rice is probably not inaccurate to observe that “A lot of the satirical
nineteenth-century French jokes just don’t work”. Nowadays, Offenbach’s
mockery of myths and Gods, and of Gluck’s presentation of them, is unlikely
to prompt either a giggle or the disgruntled self-righteousness of the
critic, following the 1858 premiere at the Bouffes-Parisiens, who
condemned the operetta as a ‘’profanation of holy and glorious antiquity’.
And, while Flaubert had been prosecuted for obscenity in 1856 for his
daring depiction of the adulterous Emma Bovary, marital discord and
infidelity no longer raise eyebrows. 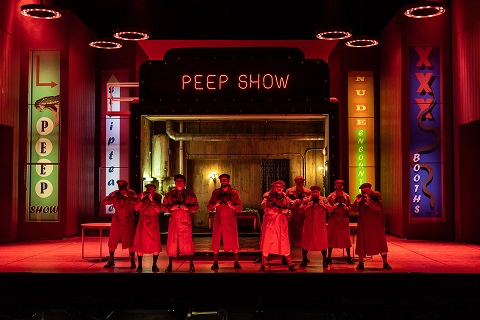 But, what Offenbach really had in his sights was the Second Empire elite
and his operetta’s revolutionary energy derives from its lampooning of the
veneer of glamour and wealth which masked corruption and authoritarianism.
A satire on pompous politicians and their vices surely has some
contemporary relevance? After all, Act 2 ends with the gods’ declaration
that their ‘strong’ leader is taking them all down to hell. Quite.

Rice seems to have decided otherwise. I was interested to read a comment by
the Spectator’s Kate Maltby, written in October 2016 following
Rice’s departure from her position as Artistic Director of the Globe
Theatre: ‘Rice seemed to view Shakespeare’s texts as obstacles to be
avoided, rather than challenges to be solved. […] Why probe a Jacobean
playwright’s blindspots if you can just rewrite them?’ Plus Áa change … 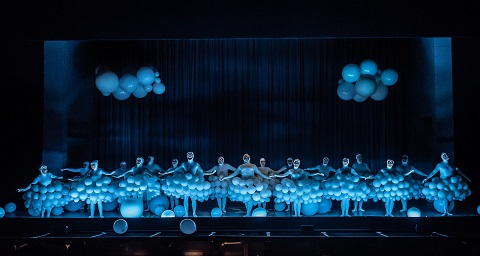 Don’t be misled by the balloons. Courtesy of the valiant ENO Chorus we have
balloon bees, balloon sheep, balloon tutus, balloon clouds, even a taxi
borne aloft by balloons, but, set in Soho in the 1950s, Rice’s production
is no party. During the overture she presents a ‘pre-story’ which sees the
genuinely enamoured Orpheus (Ed Lyon) and Euridice (Mary Bevan) wed,
conceive a child and then suffer a tragedy which results in marital
breakdown. A wreath spelling BABY casts a depressing and not entirely
tasteful shadow on proceedings. 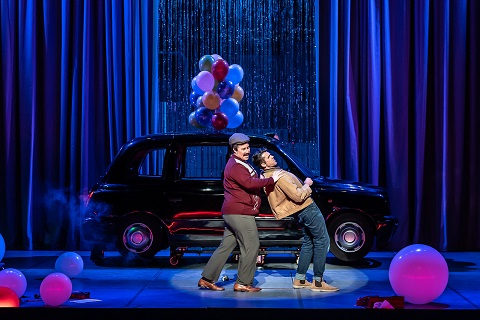 The traumatised Euridice runs off with ‘shepherd’ Aristaeus (Alex
Otterburn’s Pluto in disguise) and Public Opinion (Lucia Lucas) – a London
cabbie who has ‘The Knowledge’ – persuades Orpheus to hop into his TX4 and
head for Hades to win her back. First, though, we stop off in Olympus, a
luxury lido where the gods are bored and behaving badly. Ambrosia and
amorous adventures are no longer gratifying, and Jupiter is a sexual
predator. When the Hackney cab rolls up in Hell, we find Euridice
imprisoned in a hovel, the horrors of which are exacerbated by her
inebriate gaoler, John Styx (Alan Ope is brilliantly sinister but it’s not
clear why he laments his lost kingship of Poland, rather than Boeotia?).

Forced to work in a sleazy Peep Show, Euridice is leered at by dirty old
men-in-macs and a beer-bellied Bacchus (the ENO Chorus’s Peter Willcock).
Where Offenbach’s score gives us the sparkle of life-affirming laughter,
Rice gives us misogyny and #MeToo sexual abuse. Euridice sings: “Dance!
Till you feel your soul goes. Dance until control goes and you can’t ask
why. Embrace the frenzy and the pain until the mad becomes the sane.”
Infernal it certainly is, but not the time and place for a can-can. 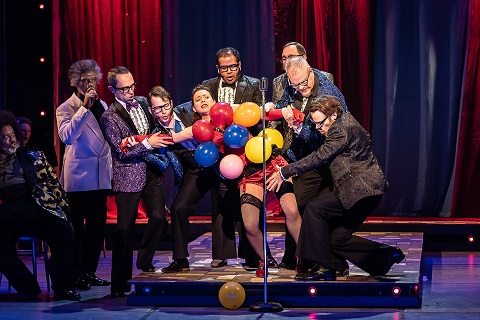 Rice declares, “if I do one thing I will make people care about [Orpheus
and Euridice]”; it might have been better if she’d made us laugh. Even our
London cabbie’s humour fails, though Lucas does her best with the ponderous
dialogue. And, if we do care, then it’s because Lyon and Bevan,
and the rest of the strong cast, sing with courage and commitment, not
because of Rice’s meddling. 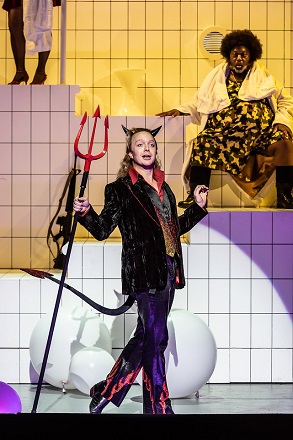 Bevan’s beautiful warm soprano gives some weight to Rice’s conception of
Euridice as a woman wronged, and Lyon is a sympathetic Orpheus in contrast
to the slimy sleaze-balls who plague his beloved. Alex Otterburn’s campy
Pluto flicks his forked tail with aplomb and delivers an agile performance.
Ellie Laugharne looks and sounds good as the gold-lame hot-pant wearing
Cupid, though her words evaded me, and Idunnu M¸nch sings Diana’s decidedly
unchaste aria superbly. Judith Howarth (Venus) and Anne-Marie Owens (Juno)
are strong vocally but under-directed, though the latter gives a
masterclass in how to declaim the spoken dialogue. Keel Watson dons a
medal-decorated white bathing-gown over his combat fatigues as the
bellicose Mars. Dressed in Bermuda shorts and drawing on a cigar, Willard
White sings resonantly but is a rather stern and disengaged Jupiter;
perhaps he was disaffected by having to sing lines such as “When I wiggle
my bum, my little wings begin to hum” in the fly-duet.

Lizzie Clachan’s set and Lez Brotherston’s costumes are eye-pleasing and
colourfully lit by Malcolm Rippeth. In the pit, Sian Edwards does her best
to serve up some sparkle, but the stop-starts caused by the dull
(amplified) dialogue take the edge of the dramatic pace. Glitter and be gay
this Orpheus is not. By the end, the balloons had well and truly
burst.