Some of Korngold’s music I have responded to warmly, some less so. (It
would still take some persuasion, though now less than before, to drag me
to another performance of Das Wunder der Heliane.) My experience
with Die tote Stadt has been mixed too. That, however, is bye the
bye, for this new production and still more the performances within it,
superlatively conducted by Kirill Petrenko, made for a splendid evening
that more or less had me forget reservations hitherto entertained.

Petrenko’s conducting and the playing of the Bavarian State Orchestra could
hardly have been bettered. There was no doubting the care taken in his
preparation, nor his ability vividly and meaningfully to communicate
understanding of the score in the theatre. Once the harmony becomes more
interesting, during the second and third scenes, Petrenko showed himself
equally alert to its shorter-term expressive potential and, score
permitting, longer-term tonal implications. There is greater progress in
such terms here than in, say, Schreker’s more harmonically—and
dramaturgically—adventurous Die Gezeichneten, which ends up going
round and round in circles, having one thank God for Schoenberg and
Stravinsky. Petrenko likewise showed skill surpassing that of any conductor
I have heard in communicating Korngold’s motivic working as dramatic past,
present, and future. The orchestra, moreover, offered a far more variegated
sound than I heard from the Vienna Philharmonic in Salzburg in 2005; if
that calorific frenzy impressed in its own way, this was ultimately a more
revealing sound as part of an overall dramatic conception. Where some
performances of what we may broadly call ‘late Romantic’ music—a term I
generally avoid on account of chronological absurdity and levelling
generalisation—all too readily become congested, here was a panoply of
orchestral colour that shifted before our ears so as to suggest, at least
during the most skilfully composed passages, ready understanding of
Straussian phantasmagoria. 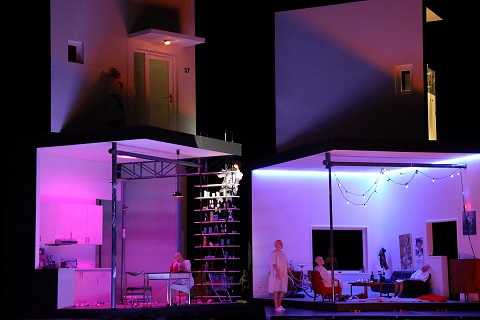 For whereas in Salzburg, Willy Decker’s staging (later seen at Covent
Garden too) was very much in ‘period’ keeping not only with Korngold but
also with George Rodenbach’s Bruges la morte, Fernand Khnopff, et al.—and as such will I suspect greatly have appealed to
enthusiasts—Stone’s production offered a welcome contemporary—to
us—alternative for those who, like me, find the opera’s laboured symbolism
both stifling and a little empty (as well as curiously dated for 1920).
Here, Paul’s house (no.37: no evident symbolism to me, though you may know
otherwise) is the focus for a cancer bereavement—as we learn when we later
behold Marie’s apparition—from which he shows no sign of recovering. One
room’s every wall is covered with pictures of her; he hangs her hair in his
bedroom; some of the house, furniture covered, goes unused; and so on. His
housekeeper, Brigitta, and friend, Frank, are clearly, justifiably
concerned. However, a psychonalytical dream sequence appears to offer the
route to recovery. Having at least begun to work out some of his issues
with Marie/Marietta in a dream in which all manner of strange things can
happen and do—the dead town comes into its own, multiplying Doppelg‰nger, Pierrot-troupes, accusations thrown as freely as
underwear, etc.—there is perhaps some hope for the future in what uncannily
looks and sounds like the morning of a fresh start. Ralph Myers’s revolving
set permits the house to transform itself, almost as if it were turning
itself inside out, as do the characters, their acts, and their neuroses.
‘It was all a dream’ may or may not be a satisfactory solution; if not,
that remains a problem with the work itself. Stone’s production makes
uncommon, if arguably reductive, sense of a text that can readily seem
somewhat silly. 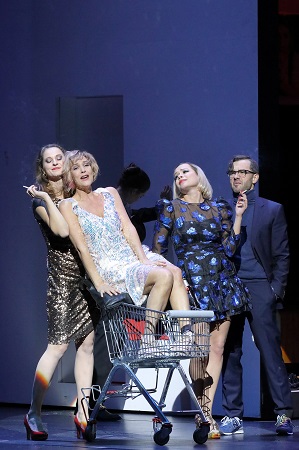 Vocally, this was unquestionably an evening to savour. Jonas Kaufmann’s
voice is a very different instrument from that of a few years ago. Sounding
more baritonal than ever, Kaufmann had lost nothing, however, of his
ability to float and turn a long line, nor to forge from word and tone that
particular, peculiar alchemy of song. In opera, further alchemy is
required, of course, with the art of gesture; this was as compelling a
stage performance—and I have seen a few—as I have seen from him. Kaufmann’s
Paul remembered, lived in, and came close to final suffocation from times
past, but in its final freshness, shared in the hope suggested, if only
suggested, by Petrenko and Stone alike. Marlis Petersen’s Marietta proved
the perfect foil, a high-spirited heir to Strauss’s Zerbinetta, albeit with
the vocal reserves and finely spun line of something more Wagnerian. Her
acting skills proved just as impressive, as did those of other partners
onstage. Jennifer Johnston’s no-nonsense yet compassionate Brigitta,
Andrzej Filo?czyk’s sympathetic and beautifully sung Frank, the rest of an
excellent supporting cast, estimable choral forces: all contributed to a
dream performance in every sense. In the intelligence of its accomplishment
of values both musical and theatrical, I suspect this Munich Tote Stadt will set a gold standard to successors.