Cocteau’s take on the OrphÈe myth is a touch idiosyncratic and the
allegory is reset, like tuned in and tuned out radio stations (a recurring
motif in this staging), to an unfolding of the story in a contemporary
context. All of this is meticulously recreated in Lizzie Clachan’s sets for
ENO. This is post-war France, with its shattered buildings and grey
arrondissements – a city where characters kind of zone in and out between
the living and the dead. OrphÈe is now a poet, though he is in something of
an existentialist crisis. Eurydice’s blandness is seen through her kitchen
and a threadbare armchair; if there is colour here it isn’t of the dazzling
kind, just a mosaic of demi-print which is washed out. As if to illustrate
the banality of this relationship, Eurydice’s dress is identical to that of
the wallpaper, so she just appears to be absorbed into it, forgettable.
OrphÈe simply looks fragile, emasculated by his recognition as a poet.

In contrast, the Princess, the very embodiment of Cocteau’s strong feminine
figure, is endowed with extraordinary visual power. Her long, sweeping
black dresses and hair that shines like anthracite, is an image that is
moulded in strength. The only time we see her in colour, it’s a sharp,
blazing purple which is like a torch, made all the more striking because
it’s projected entirely against black and white. As in Cocteau’s film,
Netia Jones, the director of this production, sets her up as the masculine,
erotic and powerful figure who draws OrphÈe into the underworld. A lot of
Jones’s production makes us question the role of gender identity, too.
OrphÈe is striking only for his beauty; the Princess is devastating, dark
and haunting. Ordinariness clashing with the magical, the mortal with the
immortal.

If there is much in this production which mirrors the film, there is room
because of what Glass composed in his score to take us away from the
screen. The opening scene, for example, set in the CafÈ des PoËtes, is
something of a raucous affair. It almost appears at first to embrace many
of the themes which run through both the film and the opera – the use of
mirrors, the confusion over gender – but in terms of its choreography it
looks back towards West Side Story, and Cocteau might even have
appreciated the gesture towards Brando-esque figures fused into the
narrative. Glass’s score brims with jazzy rhythms, and the cafÈ becomes a
place for acrobatics. But Jones then contrives to focus on the
homoeroticism which Cocteau so languished over – so we get the striking
backdrop from the film of the director’s lover, Jean Marais, being driven
in the Rolls Royce by the chauffeur Heurtebise with the sphinx-like
Princess. Radio is a prevailing image, a metaphor for mystery. Messages
enigmatically appear everywhere, typed out as if it’s poetry by OrphÈe who
has lost the will to create. Mirrors becomes the means by which people come
and go, disappearing into the distance. One of the most striking parallels
is in how the Princess’s palace is projected on screen as a magnificent but
destroyed torso of a building, its twisted frame and beams shattered,
debris piled high, but Eurydice’s kitchen is a real-life apartment in all
its claustrophobic tawdriness. Even here destruction is a beautiful thing
simply because inside this wasteland there is the suggestion of opulence.
Glass’s score might be dark here, but it has all the mystery that goes with
it.

Some of the staging feels a little clunky with sets moving through the
multiple scene changes. In part, this is overcome by large frames which
drop down so you look on them as if you are seeing scenes within a film. A
rolling camera rotates like a windmill. The focus is clever enough that the
eye doesn’t stray onto what is happening elsewhere. Likewise, full screen
curtains, which are partly transparent, drape across scenes from the film
so you forget that they disappear. It’s all part of this production’s debt
to cinematography which haunts this production, part of the trick work that
photography does in Cocteau’s film but an opera can’t match in live action.
The use of shadows is a magnificent achievement – as the Princess and
OrphÈe walk and run across the stage and multiple images of them appear
like ghosts; it’s hypnotic. In the underworld itself you’re transfixed by
the walking dead, one clearly of Einstein. The suggestion that Glass is
playing with us, and that Einstein on the Beach is being recalled
is unmistakable. Cocteau himself is a reference point – even before the
opera begins he is speaking to us in French, and an artist scrawls an image
of one of his masturbatory phallic drawings on a wall reminding us that
Cocteau unambiguously celebrated male sexuality. 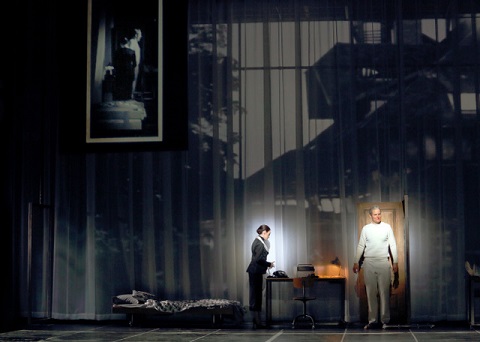 Netia Jones – in her role as costume designer – has as far as possible
made the distinction between the living and dead, the underworld and the
world on the Parisian streets, completely authentic. CafÈ society reflects
the buoyancy in Glass’s bright scoring; but in the tribunal scene there is
every suggestion she is mirroring the complexity of guilt and collaboration
which is so affecting in Cocteau’s visionary cinematography. The detail is
very finely attuned to what we hear in the score – something we rarely
appreciate in opera.

The casting and singing in this production is first rate. It has to be
said that the very size of this theatre doesn’t always make it easy to
appreciate how well artists fit the roles they are singing – and this was
partly the case here. Cocteau does complicate the story – so we get the
introduction of a new character, Heurtebise, who has fallen in love with
Eurydice. The resolution in the opera is that the Princess and Heurtebise
sacrifice their love to send OrphÈe and Eurydice back to the living on the
condition that they never again look at each other. There is unquestionably
some ambiguity in how this is played out – where do the dynamics of love
lie, and if there are love interests where does the power rest?

Jennifer France’s Princess manages to be enigmatic and imperious, embracing
everything the dour Eurydice is not. There is an elegance to France’s
Princess of Death, a rhythmic power to her characterisation of the role
which is faultless. It isn’t just the crystal-like purity, the diamond-cut
precision of her singing which is so striking but the way she acts which
also gives this assumption such presence. Standing centre stage, swathed in
black, she can sometimes seem larger than life; walking in the shadow scene
there is a rhythm to her steps which moves in complete harmony with the
music. She seems a source of mystery, no more so than when she disappears
through the mirrors and fades into the darkness. The voice is tenebrous,
yet completely resolute. There is a haunting, but formidable projection to
what she sings. And yet she is fundamentally human, capable of seeming
completely tragic as she resolves to forgo her own love. 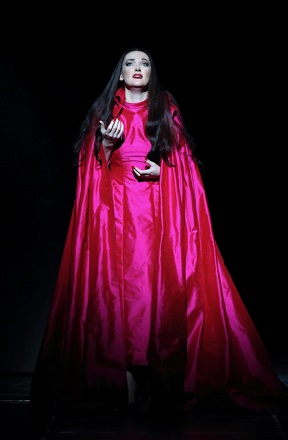 Nicholas Lester’s OrphÈe manages to stride between the banality of his
existence with Eurydice and the underworld where his love for the Princess
is never quite resolved. It never quite feels a dominant performance in
this production, however, perhaps reflecting the duality of his
underachievement and the enigma of his desires. The sense that this OrphÈe
is just an ordinary young man – almost forgettable – never ceases to be one
of the fissures in this production. Lester often appears at his best
besides his Eurydice, Sarah Tynan, where both seem to covet the essence of
their fate. But one also perhaps feels Lester’s poet is not one who is in
love with mortality; that is for the anti-hero CÈgeste whose fate is for
death to embrace the poet. And if Cocteau has us gaze on his OrphÈe, Jones
almost avoids this. As finely sung as it was, it felt to me a performance
which lacked potency – but perhaps this was entirely the point.

Nicky Spence’s Heurtebise also travels between the living and the dead, but
what OrphÈe lacks in emotional power the young chauffeur, like the
Princess, is driven by desire. Attracted to the urbane Eurydice he too must
sacrifice his love, but Spence was hugely affecting. I’ve sometimes felt
disinclined to warm to the character, but Spence’s performance of him
rather changed this. He made him vulnerable, the suggestion that his love
for Eurydice was doomed and tragic. He sang magnificently. Sarah Tynan’s
Eurydice manged to walk the thin line between being simple and sounding
anything but. The voice never lacked colour or tonal beauty, the bourgeois
print of her dress all that was needed to make her seem simply ordinary.
Anthony Gregory’s CÈgeste sang with such poetic diction in mind one often
related to his character more than one did with OrphÈe. I’m not sure if it
was intended or not, but the near reversal of the OrphÈe and CÈgeste
characters in this production had Gregory’s poet sounding more intense and
anguished, his journey through the underworld among the recent dead, and
his typing of radio messages, almost overshadowing those of OrphÈe.

If Philip Glass’s score for this opera lacks some of the richness we hear in an
opera like Akhenaten, its can sometimes appear closer to some
of the composer’s film music. There is a clear debt to Leonard Bernstein is
some of the jazz one hears; but the precision of the instrumentation, the
clarity of individual textures such as a flute or trumpet, the use of
percussion, and the detail uncovered owes something to Glass’s early training in France
under Boulanger. It’s no coincidence that Nadia Boulanger was one of the
undead walking through the underworld in Jones’s production. Geoffrey
Paterson, making his ENO debut, was fastidious in uncovering the layers in
the score and the music was conducted at a pace which never impedes
the drama of the work. But this is, I think, not a Glass opera which
suffers from tempo issues as some of his works are prone to do. The ENO
orchestra were, as usual with this composer, superb.

This is a production which works as opera, despite its heavy homage to the
film on which it is based. The tendency in the past for directors to use
the medium of cinema in opera staging’s has often felt overly
interventionist, or has interfered with what we are seeing. Netia Jones has
been able to strike a balance between the two which makes for a compelling
experience.