The decision was reached after a superb final on Sunday 17 November at the
Holywell Music Room, Oxford. The adjudicators were renowned British singers
Bonaventura Bottone and Jean Rigby, and the esteemed accompanist and
conductor Phillip Thomas.

This biennial competition was first launched in 2013 to celebrate Bampton
Classical Opera’s 20th birthday, and is aimed at identifying the
finest emerging singers currently studying or working in the UK. From an
initial entry of over 50 young singers aged 21-32 and after two preliminary
rounds, six were chosen to compete at the public final in the Holywell
Music Room. The finalists were Natasha Page (soprano), Jade Moffat
(mezzo-soprano), Daniella Sicari (soprano), Lucy Anderson (soprano), Giulia
Laudano (mezzo-soprano) and Carolyn Holt (mezzo-soprano). Unfortunately
Jade Moffat was unable to participate in the Final due to ill health.

The judges were impressed with Lucy’s overall performance, and her
partnership with Dylan Perez. Bonaventura Bottone said:

“The First Prize winner, Soprano Lucy Anderson, was wonderfully
partnered by the outstanding accompanist Dylan Perez who took the award
of accompanists’ prize. Strongest in her characterisation of Marenka’s
aria ‘Och, jak˝ 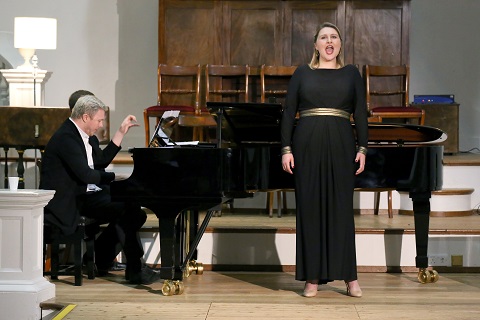 Scottish soprano Lucy Anderson has recently spent a season
as an Emerging Artist with Scottish Opera, where she made her debut in the
role of First Lady (The Magic Flute) and took part in the Opera
Highlights Tour. She completed the Opera Course at the Guildhall School of
Music and Drama, performing roles including Blanche (Dialogues des CarmÈlites) and Magda (The Consul). Lucy is a
Britten-Pears Young Artist and has received awards including the Sir James
Caird Travelling Scholarship, the Norma Greig French Song Prize and the
Mary D Adams Scholarship. Recent concert highlights include Strauss’s Four Last Songs, Mahler’s Symphony No.4 and solo
performances in Barbican Hall, Aberdeen Music Hall and the Usher Hall. Lucy
is a finalist in the forthcoming Wagner Society Competition at Wigmore Hall
and will make her debut with Opera Holland Park in the 2020 season.

Daniella Sicari
completed her postgraduate studies at the Royal Northern College of Music
with Mary Plazas. Roles includes Despina (CosÏ fan tutte), La FÈe (Cendrillon), and Gretel (Hansel and Gretel). She previously
trained at the Western Australian Academy of Performing Arts with Patricia
Price. Daniella is the recipient of numerous awards such as the WA Young
People and the Arts International Award, Amanda Roocroft Prize, the Joyce
and Michael Kennedy Strauss Prize, John Cameron Award for Lieder, the
Elizabeth Harwood Prize and Robin Kay Memorial Prize. In 2018 she worked
with Clonter Opera and this year she had her debut at the Buxton
International Festival, performing the role of Sticks in the UK premiere ofThe Orphans of Koombu and has just returned from Norway performing Sweeney Todd with Bergen National Opera.

Carolyn Holt
is from a farming background in Ireland. She was the winner of the Dermot
Troy Prize for the best Irish singer in the 2019 Veronica Dunne
International Singing Competition and recently sang the role of Sister
Helen Prejean in the UK staged premiere of Dead Man Walking in
Glasgow, to great critical acclaim. She was a semi-finalist at the Grange
Festival International Singing Competition, the winner of the Irish
Heritage Bursary, the Audience Prize winner at the NI Opera Festival of
Voice and the Sybil Tutton Award. She is a graduate of the Royal Irish
Academy of Music, the Royal Academy of Music and the Royal Conservatoire of
Scotland, where she performed many roles including Dido (Dido and Aeneas) and Mrs Jones in Weill’s Street Scene.
She has performed with Irish National Opera and the Orchestra of the Age of
the Enlightenment and performs regularly with orchestras and choral
societies at home and abroad.

American pianist Dylan Perez is the current Lord and Lady
Lurgan Collaborative Piano Fellow at the Royal College of Music. He
graduated from the Guildhall School of Music and Drama with Distinction in
the Artist Diploma. Dylan has received the Gerald Moore Prize for
Accompanists, the Paul Hamburger Prize for Accompaniment and was a
semi-finalist in the Wigmore Hall/Independent Opera International Song
Competition and Das Lied International Song Competition. Dylan is a
Britten-Pears and Oxford Lieder Young Artist, and an alumnus of the
Franz-Schubert-Institut. Dylan recently made his Wigmore Hall recital debut
and has performed at Barbican Hall, Milton Court Concert Hall, St
Martin-in-the-Fields and Cadogan Hall.