At its heart, in every sense, lay Christian Gerhaher’s Wozzeck, Gun-Brit
Barkmin’s Marie, and their child, touchingly sung by Alban Mondon. 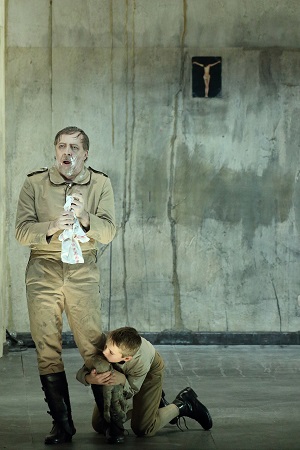 I have heard some fine Wozzecks over the years; Gerhaher must surely rank
alongside the finest. He has been selective in his opera roles; it would,
however, be an over-simplification verging on distortion to say that he is
more at home in the concert hall. Wozzeck is, of course, a very different
role from his fabled

and is surely the sterner dramatic test, perhaps especially for someone
with so heartbreakingly beautiful a voice. Or so it might seem on first
glance, but Gerhaher is an artist at least as celebrated for intelligence
and humanity. His way with words, music, and gesture too simply had one
believe that this was the character he was playing. Verbal nuance without
pedantry, attention to musical line without a hint of self-regard,
harrowing facial expression that demanded our sympathy: yes, this was a
compleat Wozzeck. Barkmin’s Marie, equally well sung (and spoken), equally
sympathetic, made for a fine complement indeed. Through her artistry one
felt her hopes as well as her devastation, her pride as well as her
capacity for love. Wolfgang Ablinger-Speerhacke’s Captain, John Daszak’s
Drum Major and Jens Larsen’s Doctor skilfully trod the line between
character and caricature, no mean feat in a production that often called
upon them to accentuate the grotesque. Kevin Conners as Andres and Heike
Grˆtzinger as Margret impressed too, carving out their own dramatic
potentialities, even as we knew them no more likely to succeed than the
opera’s central couple. Cast from depth, this was a fine Wozzeck
for singing-actors.

Hartmut Haenchen’s conducting proved efficient most of the time, albeit
with a few too many discrepancies between sections of the orchestra as well
as between orchestra and pit. To be fair, there were also passages—often
the interludes—in which all came together to offer something considerably
more than that. Haenchen’s reading was not for the most part, however, one
to offer any particular revelation. He clearly knew ‘how it went’, yet the
post-Wagnerian orchestra as dramatic cauldron had its juices emerge only
fitfully. 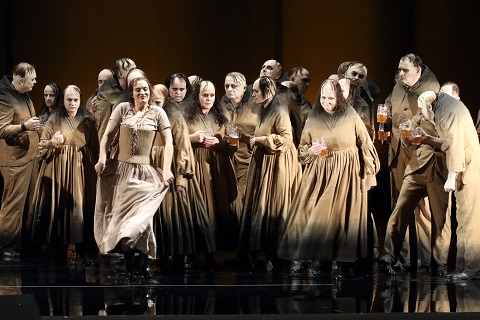 Andreas Kriegenburg’s production seemed conceptually a little unsure of
what it was trying to achieve. Straddling the divide between Expressionist
grotesquerie—some arresting images there—and social realism—with a curious
twist of Brechtian image, not dramaturgy—is a perfectly reasonable
strategy. Communication of how the two might intertwined proved more
elusive. Updated to what seemed to be more or less the time of composition,
the production left no doubt of the gross injustice and poverty pervading
the world in which these events took place. I could have done without all
the splashing round in the lake below. Kriegenburg often scored, however,
in particular dramatic touches: above all, the acts of Wozzeck’s son, keen
to learn from his ill-fated father: watching, listening. and in some cases,
acting, as when this evidently wounded child broke his mother’s heart by
painting the accusation ‘Huren’ (‘whore’) on her wall. All was lost, then:
a moment of devastation. Already we knew what fate, or rather society, had
in store not only for Wozzeck and Marie, but for their child too. ‘Wir arme
leut’ …