Sig. Freschi’s little divertimento was a but a small part of a much bigger evening that went on, I assume, to include at least a naval battle on the villa’s pools, grandiose entertainment for a multitude of invited dignitaries.
A larger perspective of Venetian opera finds Monteverdi’s complex Coronation of Poppea premiere in 1643. Francesco Cavalli’s racy, slice-of-debauched-aristocratic-life operas that we see these days come from the 1650’s (his famed Parisian misadventure with theatrical machinery, Ercole Amante, was in 1662). Antonio Vivaldi, the resident musician of a Venetian orphanage for musically talented girls, came onto the local opera scene as an impresario of the newer Neopolitan style in 1712, and later (1727) wrote his own Orlando furioso based on Ludovico Ariosto’s 1513 epic poem that had established a psychopathology of love that more or less endured until the Romantics. 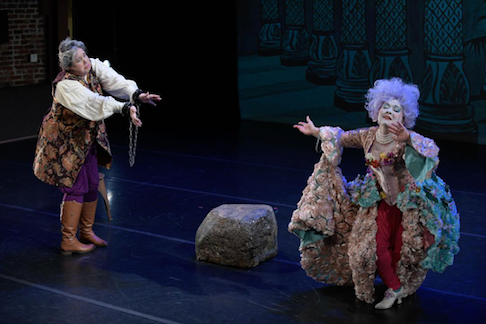 Sara Couden as Clorindo, Kindra Scharich as Rosaura
All these threads converge in Sig. Freschi’s little comedy for the Doge’s son Marco whose country estate included an orphanage for talented girls. Possibly this orphanage resource is why the Ars Minerva production made use of only treble voices — one male lover was a trouser soprano, the other was a trouser contralto. Ermelinda and her friend Rosaura were duly female. Ermelinda’s father was a male mezzo-soprano (countertenor).
In short, Ormondo loves Ermelinda, Armidoro does too. Ermelinda loves Ormondo, Rosaura does too. Ormondo becomes the mad Clorindo who pretends to love crazy-in-love Rosaura. Aristeo, Ermelinda’s father, intervenes. Ermelinda tries to kill herself for love. Unlike a Cavalli plot this one is quite simple, and unlike Cavalli’s variety of musical forms Sig. Freschi limits himself to recitative, arioso and through composed arietta. There were a few ritornellos and only one sort of duet in the string of solo numbers that told the story very simply and very directly. The dignity of early Venetian opera had long since been thrown into the canals and the grandiose, embellished arias of the Baroque are many years away,
There was no need for theatrical machinery. We were either indoors or out. The Ars Minerva production covered the huge back wall of the 171 seat ODC Theater (a fine dance venue in San Francisco’s Mission district) with projected images created by Entropy (a person’s name) that colorfully abstracted architectural detail vaguely reminiscent of the period.
The elaborate costumes, wittily abstracted from period shapes were designed by Matthew Nash, now retired from the San Francisco Opera costume shop. Stage director CÈline Ricci deftly moved her actors around simple, portable props in the center of the expansive dance floor, the Ormondo gone mad — as Clorindo — teased theorbo player Adam Cockerham who was seated with the harpsichord, cello, and three da braccio viols far stage left.
The program booklet does not credit an edition of Sig. Freschi’s little opera, thus we may assume that early music harpsichordist and conductor Jory Vinikour organized the production musically based on a manuscript found at Venice’s Marciana Library. It is lively music that flows in very natural speech rhythms enhanced with very inventive melodic riffs that tease and amuse us and become upon occasion quite specific songs. These players were a confident lot that gave us great delight in their ritornellos. The three instrument continuo cleverly supported the excellent performances center stage. 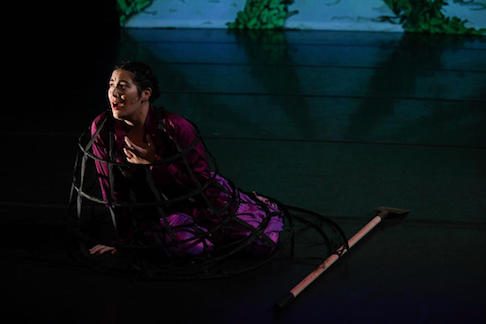 Nikola Printz as Ermelinda, lighting design by Thomas Bowersox
Those 17th century dignitaries will have been mightily amused as we were with the broad comic antics of a nicely matched cast. Ermelinda was sung by mezzo-soprano Nikola Printz who brought rich tone and informed period inflection to her femme fatale role, and created, with Sig. Freschi’s help, convincing musical pathos in her attempted suicide. Her friend and rival Rosaura was sung by Kindra Scharich who made this love sick character a comic masterpiece, every sung phrase an insidious calculation, every movement a neurotic gesture, and all in beautiful voice that flowed naturally over composer Freschi’s finely chiseled lines.
Contralto Sara Couden sang Ermelinda’s suitor Ormondo who disguised himself as a peasant named Clorindo to fit into pastoral life. Mlle. Couden possesses a rare contralto voice that offers her a wide range of roles — from this vocally convincing castrato role, to the nurses, grandmothers and witches of later repertory. She gave herself to the creation a truly rustic Clorindo who goes out and in of feigning madness. Clorindo’s rival for the love of Ermelinda, soundly thwarted, is Armidoro sung by soprano Deborah Rosengaus who created one of the most beautiful musical moments of the evening in her final lament, singing composer Freschi’s fine music with exquisite phrasing.
And what would an Italian opera of this period be without a countertenor! Thus male mezzo soprano Justin Montigne sang Ermelinda’s father Aristeo! Not exactly gender bending, but possibly representative of the musical norms of a time gone-by where voices interacted and competed musically rather than theatrically.
Ars Minera is in its fifth year of presenting the modern world premieres of forgotten operas (one opera each year)!
Michael Milenski