Keith Warner’s production – with the help, or hindrance, of Boris
Kudli?ka’s sets – is a dark tunnel through which we travel, down an endless
vortex, into this Shakespearian carnage of intrigue, jealousy and murder.
If it has a single virtue it is that it rarely interferes with the
Otello-Iago-Desdemona triangle because what Warner does is allow these
characters to take to the stage as if completely exposed before us. The
sheer minimalism of this, at times, expressionist design is fraught with
danger, however; it relies entirely on three singers who can sing and act
their way through the emotional complexity of Boito’s libretto. Thankfully,
that is largely what the casting of this first revival of Warner’s 2017
production achieves.

Gregory Kunde’s Otello, grizzlier than usual, but struggling to exert his
victorious supremacy in the opening scene, is simply overwhelmed by
Warner’s grand setting during the storm. But this isn’t atypical of this
production; the big choruses, the fights are projected to be epic. The
elements of earth, air and water are all there it’s just that Kunde’s
‘Esultate!’ is rather shipwrecked by the excessiveness of the staging
around him. However, when Warner allows his Otello to take centre stage,
Kunde is magnificent in fleshing out a character who is on the brink of
destruction for his obsessive love of Ermonela Jaho’s fragile Desdemona and
the decaying jealousy which will inevitably conclude in their deaths.

Carlos ¡lvarez’s monstrously manipulative Iago is both literally, and
metaphorically, tinted through the duality of two opposing veils. The black
and white masks which Iago juggles with – notably in the ‘Credo’ – are in
essence but shadows of Kudli?ka’s sets: those vast black-walled
shape-shifting screens which suddenly give way in Act IV to the purity and
blanched whiteness of Desdemona’s bedroom are striking, if perhaps
inevitably obvious. 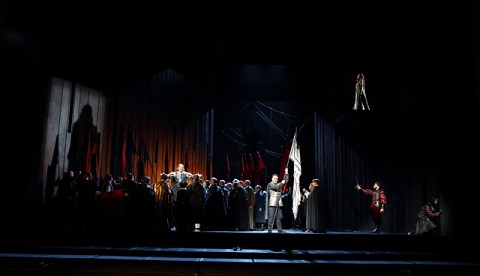 There is, I think, more to Warner’s Iago than meets the eye; or, perhaps it
was entirely how ¡lvarez decided this Iago should be played. Boito doesn’t
particularly stretch the motives for Iago’s deception of Otello; but Warner
does, at least, make him more Mephistophelean than we usually get, at least
implying there is something more deeply rooted in this character’s
malevolence. Warner places his Iago in a smoke-churning, almost Hades-like
furnace, during the ‘Credo’ so the suggestion is at least there that there
is more than just envy motivating him. If the Bonfire Chorus had been a
seething, almost Macbeth-like display of vivid colour the ‘Credo’ is
plunged into semi-darkness with just the grey remains of the smoking fire
pumping up from the stage. But this still isn’t an Iago who slivers like a
snake, a Cobra ready to inject his final poison. Rather, what you see is
what you get; the scales on his coat jacket reminding us that his mendacity
isn’t even skin deep.

Of course, emotion in Otello is inversely framed. ¡lvarez proved
more than capable of making Iago deliberately devoid of it; his was a
particularly powerful portrait of an Elizabethan ‘Revenge’ character.
Kunde, on the other hand, walked a neat tightrope between his jealousy and
his obsession. Jaho’s Desdemona – perhaps as one might expect for a singer
so adept at singing Puccini heroines – was touching and vulnerable. What
was undeniable was the superb chemistry between the three singers which
made the tragic end all the more devastating. 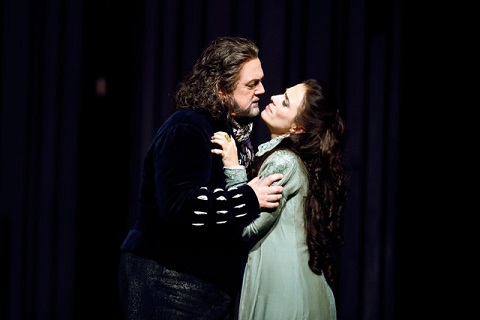 That chemistry was also apparent in the blending of the voices and the
refined, studied acting. There is something of the Madonna about the role
of Desdemona (though you generally struggle to see that in Warner’s
production – in the Homage Chorus it seemed notably absent). Jaho is so
slight she is like a porcelain figurine, delicate and fragrant, with a
voice to match. If it isn’t particularly firm, it is exquisitely refined –
and impressively able to float pianissimos like butterflies in
flight. We got a ‘Willow Song’ from her which was unexpectedly touching,
often completely reflective of Verdi’s orchestration (mirroring a clarinet
here or there) – but it also had the right amount of pent-up emotion.

That Kunde’s Otello should have been such a formidable presence, and that
the voice was generally so powerful, made his relationship between
Desdemona and Iago more balanced than it usually is. The fact Kunde is a
tenor who can howl and rage when he needs to, carved out a brutalist
portrayal of an Otello who clearly made his presence felt. This was rather
striking in Act IV, in the bed chamber, where Kunde simply had to be on
stage against an orchestra where double basses were muted to exert a power
which was just simply menacing. He could be lyrical with Desdemona (in
their Love Duet) and then simmer with uncontrollable ravings when his
jealousy manifested itself. It was an entirely complete portrayal of a
complex character.

Carlos ¡lvaros’s Iago – as is so often the case in performances of Otello – was layered with riches. This was an Iago, that even when
Otello turned on him during ‘Tu! Indietro! Fuggi’ resolutely refused to be
cowed, an Iago, who in the closing Act II duet with Otello, where the act
of vengeance is sworn, ripped through the orchestra. As a study in base
psychological terror, emotional coldness and premeditated evil it was a
formidable achievement. His voice is dark, yet steady, and at times sounds
almost deliberately anti-lyrical but that is perfectly suitable for Iago.
In the magnificent Quartet, where Iago tricks Emilia into giving him the
handkerchief it, was ¡lvarez who was the focus of attention – despite being
all but occluded behind the latticed backdrop. The irony, of course, is
that Iago has almost nothing to sing – while Desdemona carries almost the
whole of the piece.

There were almost no weak links in the rest of the cast. Freddie de
Tommaso’s Cassio was cleverly cast – a handsome figure drawn into Iago’s
scheming but entirely plausible as guilty to a jealous Otello, and innocent
enough for Iago to revel in his power to ruin others’ lives. He sang
beautifully, capturing the brawling, hard-drinking, quick-to-arms roguish
captain. AndrÈs Presno was a decent Roderigo, Catherine Carby an Emilia
tricked into the unfolding plot devised by Iago, then touching in her final
scene with Desdemona.

This is in many ways what I would describe as an anti-production. There are
merits to this, assuming one has a cast of principals who have the
chemistry to work together and a conductor who readily views Otello as the magnificent achievement it is. Antonio Pappano is
clearly of this view – and that was apparent from the opening storm, paced
with a visceral energy that never really receded throughout the rest of the
opera. Pappano’s gift, especially where the score demands tonal colour
(such as in the prelude and first scene of Act IV, or the Bonfire Chorus)
is to give the music a true Verdian palate. Some of the instrumental
details, the woodwind phrasing, the beautifully balanced off-stage brass
and their genuinely golden hue, were very impressively done.

But Warner’s reliance on his cast is a risk, especially when some of this
production seems tenuous. One wondered, for example, what the shattered
remnants of the Lion of Venice symbolised in the rafters of a room in Act
IV. Nice little touches, such as Otello’s blood spurting like a red inkjet
against the white wall in front of Desdemona’s bed, were few and far
between.

We should certainly be grateful that this Otello was the artistic
achievement it was; future revivals of it might not be quite so lucky.