Setting the action in a Spanish border town or North African colonial
outpost in the immediate post-Franco era, Bieito creates a world populated
by lascivious soldiers and vicious criminal lowlife. The black air throbs
with machismo and testosterone thumps through the veins of the military and
smugglers alike. The women – their blingy rags seedy rather provocative –
are meat for sexual slaughter, though they are not averse to hair-pulling,
cigarette-burning bitch-fests of their own either. The children are
beggars.

It’s certainly nasty. At the start, a soldier dressed only in his
underpants and carrying a heavy rifle runs in a circle around his military
colleagues, a punishment which embodies the ever-tightening twist of a
noose. Eventually he collapses and is dragged off, like a carcass. Zuniga
gets slammed in a car door. One small child, perilously vulnerable, hovers
amid the violence and her innocence seems ripe for ravaging, but Bieito
holds back. 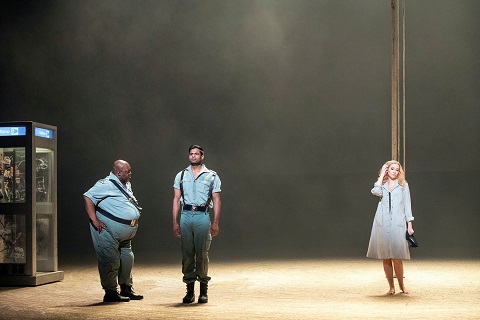 Designer Alfons Flores offers no ‘set’ as such, just a flag-pole – the
Spanish emblem hoisted in Act 1 is unceremoniously used as a beach towel by
a lotion-slapping leggy blonde gleefully awaiting the toreador’s exploits
in Act 3 – and a telephone kiosk. Carmen emerges from the latter to sing
her Habanera, as if it’s her phone-sex showpiece. A dusty circle suggests
bullring or barricade, as you like; there’s no freedom whether you in or
out. Lillas Pastia’s bar is a second-hand car lot: these brigands keep on
the move, though the battered Mercedes need a helping nudge to get rolling.
Those in the ENO audience who thought that they were in for an evening of
the eye-watering hues and exotic scents of Spain must have been
disappointed.

Reviewing the first appearance of this production at ENO, in 2012, I noted
that ‘life here is perilous and desperate, and self-serving ruthlessness
offers the only hope of survival’ but that this ‘potentially intriguing and
insightful concept’ was weakened because ‘such deadening violence is by
nature static rather than dynamic, and the problem with this at times
startlingly discerning and imaginative production is that as it progresses
it needs a shot of dramatic drive’. The problems seemed different this time
round but had the same effect.

The bourgeoisie at the OpÈra-Comique in 1875 might have been both horrified
and titillated in equal and complementary measure by the issues of race,
class and gender which Carmen shoved under their noses, but sadly
the exploitation and subjugation of women – violence, prostitution,
destructive defiance – seem all too familiar now. This production was first
mounted at the 1999 Peralada Festival in northern Catalonia, and then
adapted for the Gran Teatre del Liceu in 2010. At twenty years-of-age, it’s
starting to feel a bit weary.

Bieito’s images are striking, often unpleasant and sometimes discomforting,
but the violence seemed rather abstract on this occasion – dislocated from
a real community, real people and genuine relationships. The ENO Chorus
sang well, but the vulgar masculinity seemed rather cartoonish. Though Alex
Otterburn was a terrific MoralËs, really dark and disturbed, Keel Watson’s
Zuniga scarcely registered in dramatic terms. Most problematic of all was
the fact that there was absolutely no chemistry between the central pair of
tragic lovers. 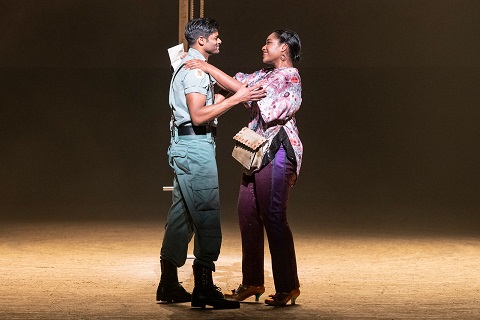 Justina Gringyt?, returning confidently to the title role that she
performed at ENO in 2015, had plenty of grit and edge, though not much
sultriness – at times she sounded as if should be singing Jan·?ek not
Bizet, and the Eastern European twang to the English text did not so much
suggest ‘an outsider’ as make it impossible to forgo reliance on the
surtitles (mercifully the spoken dialogue has been massacred by Bieito to
the point of non-existence). There was nothing that was not secure and
technically assured about Gringyt?’s performance, but it was a
‘motive-less’ as the set was ‘Spanish-less’.

American tenor Sean Panikkar impressed in terms of ardour, colour and
warmth, but he did not convey the almost hallucinatory madness that
overcomes Don JosÈ under the heat of the Spanish sun and in the glare of
Carmen’s tempting sexual allure. I wasn’t quite sure why he killed her at
the close. Nor, was I convinced that this JosÈ had any genuine feelings for
Nardus Williams’ MicaÎla (or for his own mother, for that matter, whose
absence and demise he frequently laments). Williams is asked to forgo any
semblance of innocent ingÈnue and she did this by singing with power, a
rich tone enhance by a full vibrato, and grabbing JosÈ in a passionate
lip-locked embrace. Williams got the biggest applause of the night for ‘Je
dis que rien ne m’Èpouvante’ but how do we square this with the bitchy
vulgarity she exhibits when she spits on the spread-eagled Carmen when she
manages to get JosÈ to leave with her at the end of Act three to visit his
dying mother? 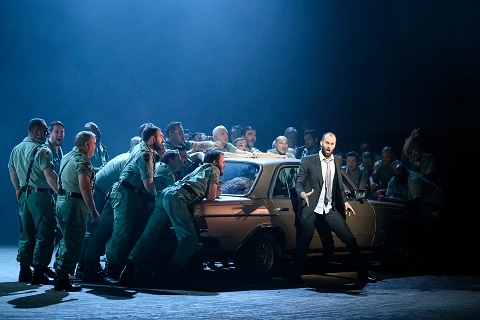 Ashley Riches struggled to make Escamillo ‘exciting’ – as any ‘torreador’
might, when dressed in a grey suit and deprived of one’s bullring – but he
sang with characteristic vigour and precision. If I suggest that Ellie
Laugharne (Frasquita) and Samantha Price (MercÈdËs) were a frightful double
act, that’s a positive comment in the context of this production: in fact,
the card scene was one of the most persuasive and ‘human’ episodes in the
performance.

This is a ‘noisy’ production. The smugglers stamp and stomp, car doors
slam, a naked soldier performs the torero’s night-before-the-fight
ritual, slapping his abs with quasi-lycanthropic lust under the glow of the
moon beam. It can all be rather distracting, especially since conductor
Valentina Peleggi didn’t inspire the ENO Orchestra to coloristic heights:
it felt rather muted in the pit, though some fine horn and harp playing
grabbed one’s attention at times.

Toussaint Meghie’s white-suited, trilby-topped Lillas Pastia got the show
underway with a sleight of hand involving a red kerchief ‡ la
matador, but it will take more than a box of tricks to make this Carmen come fully alive. Perhaps as the run unfolds the cast will
get into the groove and bring some magic – black or otherwise – to Bieito’s
twilight zone.