Emmanuel Villaume conducted, with Charles Castronovo as Rodolfo (who sang
the role in the production during 2017/18), Andrzej Filonczyk as Marcello,
Peter Kellner as Colline, Gyula Nagy as Schaunard and Aida Garifullina
(making her Royal Opera debut) as Musetta. The revival was directed by
Julia Burbach.

Jones’ production replaced the Royal Opera’s longest running production,
John Copley’s 1974 La bohËme with supra-realistic designs from
Julia Trevelyan Oman: a much loved production, frequently revived, which
was launched with a cast including Katia Ricciarelli and Placido Domingo,
and whose final revival (supervised by Copley himself) included Anna
Netrebko and Joseph Calleja, with some performances conducted by Placido
Domingo. Some of Jones’ decisions around his new production should perhaps
be seen in the light of having to replace this production.

One question which hangs over La bohËme, perhaps surprisingly, is
‘who are these people?’ Puccini specifies that the opera is set in Paris in
the 1830s, when the original Henri Murger stories were set, but is it? Are
the young men students, or are they men simply living the bohemian life, as
happened at the period? In other words, are they role-playing the life of a
struggling artist? Perhaps the characters are denizens of the Paris of
1890, when Puccini wrote the opera, a city divided from the city of Murger
by the huge urban renewal of Baron Haussmann? Puccini is rumoured to have
based some of the men’s antics on the japes that he and his friends got up
to when he was studying in Milan, and some of Puccini’s friends claimed
that they were the originals of the young men, as Puccini had a bohemian
club in a local tavern whilst he was writing the opera. And don’t forget
that the young Puccini was taken under the wing by a group of older Italian
artists who had all been members of the Scapigliatura (literally unkempt or
dishevelled), the Italian artistic movement which was the equivalent of
French bohemianism.

Modern directors often side-step these issues by setting the opera
somewhere in the 20th century, but Jones addresses it head on by
adding a theatrical element to his production. Whilst the costumes and set
details are all clearly 1890s, he and designer Stewart Laing provide a
great deal of evidence of the theatrical mechanism: no drop curtains, clear
and obvious scene changes, visible lights and snow machine, stage-hands
moving the scenery. Jones also strips back some of the detail. Whilst Act
Two is a dazzling whirl of theatrical daring, all vivid action and moving
scenery, Acts One and Three take place in a bright attic space. There is no
dark when MimÏ and Rodolfo’s candles go out, there is no shaft of romantic
moonlight for ‘O soave fanciulla’. Instead, Jones leaves space for the
singers and the production relies on the relations between the singers, and
the characters they create. Some of the action is naturalistic, but often
the four young men, Rodolfo, Marcello, Colline and Schaunard act as a sort
of chorus. It could be stagey and artificial, but much depends on the
singers creating the roles.

Thankfully, for this revival the Royal Opera had put together a strong and
very balanced cast, with Simona Mihai displaying little, if any, sign of
having been parachuted in at the last minute. 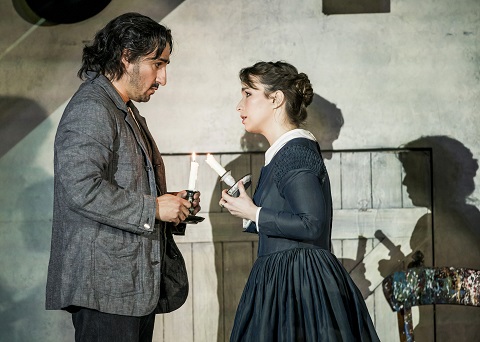 Mihai and Castronovo made a fine, believable pairing as MimÏ and Rodolfo.
Mihai successfully combined a sense of fragility with an underlying
strength of character, and a powerful ability to project musically.
Castronovo’s performance was intelligent and generous; this was not one of
those Rodolfos which, though finely sung, are all about the tenor.
Castronovo had the ability to shape lines, and sing quietly, and slip into
ensemble. He and Mihai made a superb pairing, and for me the strongest
scene in the opera was the end of Act Three where the set moves backwards
and leaves the four singers, Mihai and Castronovo, Garifullina and
Filonczyk (as Musetta and Marcello) on stage. Mihai and Castronovo made
this a powerful moment, immensely moving and memorable in a way that it is
often not. MimÏ’s death scene was finely and intelligently done, yet there
was something a little staged about it (perhaps because of Mihai’s
last-minute substitution) so that whilst I admired it, my guts were not
quite wrenched as they should be.

The young (he was born in 1994) Polish baritone Andrzej Filonczyk made a
strong Marcello, making him an equal character to Rodolfo and MimÏ. There
was a lovely ping to Filonczyk’s voice, and it helped that he made fine,
sexy Marcello, albeit in a different style to Rodolfo. This is a romantic
opera and whilst we can suspend disbelief, it helps if we don’t have to.
Andrzej Filonczyk and Aida Garifullina made the relationship between
Marcello and Musetta really sizzle (and perhaps showed us what was lacking
in that of Rodolfo and MimÏ). Garifullina, perhaps somewhat luxury casting
as Musetta, played Jones’ conception of the character to the hilt, giving
us a waltz that was beautifully sung and very sexy (including the removing
and throwing of the knickers). There was a grandness to Garifullina’s
Musetta too, and it made me regret that Puccini decided not to set the
scene where Musetta is thrown out of her lodgings and throws a party in the
courtyard. 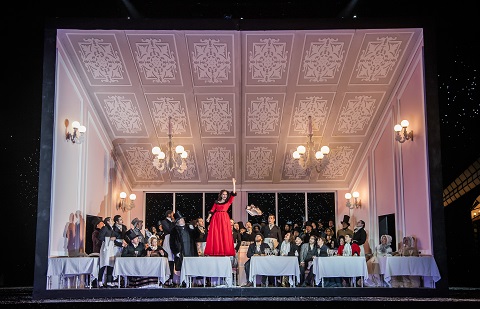 The other two bohemians, Peter Kellner as Colline and Gyula Nagy as
Schaunard, made equally strong contributions so that the four young men
were a wonderfully theatrical and balanced quartet. Nagy’s Schaunard was
almost hyper-active and very ‘theatrical’, one wondered whether Jones was
hinting about his sexuality, whilst Kellner drew a fine focus towards him,
culminating in a powerfully concentrated performance of his farewell to his
coat.

The smaller roles were equally part of the whole, with Jeremy White as a
delightful Benoit, Andrew Macnair as an intriguing Parpignol, Eddie Wade as
a highly befuddled Alcindoro, John Morrisey as the customs officer and
Thomas Barnard as the Sergeant. A word too about the non-credited roles,
there was fine work from the actors including the man playing the maitre d’hotel of the restaurant and the tall young actor leading
the band at the end of Act Two.

One of the things that I noticed about the production was quite how funny
it was. It wasn’t just the audience laughing at the surtitles as they read
them, but the action was itself funny without guying the piece. None of the
singers tried to pretend to be a teenager, but all created a real sense of
enjoyment and some moments of sharp humour.

I loved what Emmanuel Villaume and the orchestra did with the piece. This
was a flexible and fluid performance, yet one that moved. With a single
interval after Act Two, each half came in at under an hour, yet it never
felt rushed. Things flowed past in a shapely manner, and the great moments
were finely shaped without ever feeling we were over lingering.

is in production at the Royal Opera until 5th February 2020, with a
second cast conducted by Ariane Matiakh for some performances.