A wagging singsong parody of the knotty plot begins with “I’ll tell you the story of Il Trovtore.” One reason for the difficulty in following the nefarious machinations is that most of the all-important set-up has happened off stage, well before the opera’s story ever begins. So, it behooves audiences to pay particularly close attention to the Surtitles during the opening scene when the rivalry for Leonora between Manrico and the Count di Luna is explained, the introduction to the trials of the gypsy woman Azucena is laid out, along with the suggestion of a terrible secret.

Brad Dalton has chosen to stage a pantomime during the opening bars that establishes di Luna’s unholy lust for Leonora and her understandable revulsion. Mr. Dalton has staged a non-fussy, straightforward account that was admirable for its clarity and control. Stage pictures were clean and varied, although they (only) occasionally suffered from a bit of stasis.

If the characters were longer on potent vocal delivery than they were on richly detailed interaction, that is not entirely the responsibility of the director. Mr. Dalton managed to infuse sufficient life in the sometimes illogical twists and turns of Cammarano’s routine libretto to make it understandable and engaging. He even provided some compelling novel touches like having an emboldened Leonora pair with her Manrico at the close of Act I by brandishing a broadsword as if to the mission born. 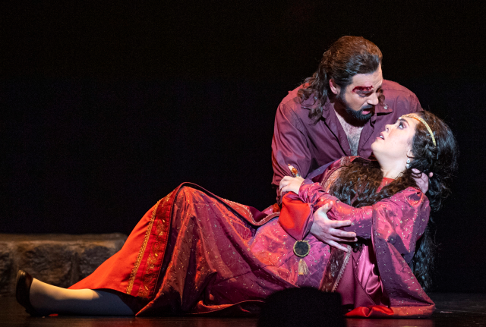 Much of OSJ’s marketing of this feature furthers a Game of Thrones dynamic, banking on that enormously popular show to help sell tickets to new audiences. The association is not misplaced, since power playing is what drives the plot. In epic fashion, the ubiquitous sword is passed and paraded ceremoniously from scene to scene, and what a satisfying scene design it is.

Steven Kemp has devised a winning variation on the “unit setting” concept, framing the space with brick legs and tormentors that not only convey imposing structures when required, but also literally frame the action with handsome detail. Within this basic look, Mr. Kemp moves about stylish steps, anvils, ramps, anvils, and well-selected set pieces that are backed by a distressed backdrop that sports a jagged rounded hole, like the outline of an oozing planet, up left.

Michael Palumbo has lit the proceedings with aplomb and colorful imagination, capitalizing on many different variations of the exclusively nighttime action of the piece. Mr. Palumbo’s areas and specials were all moody evocations of the tortured progression of the characters’ journeys. Curiously, the glow of the oncoming dawn in Act II receded to shadows for the powerful Azucena-Manrico exchange, murkily effective, but not exactly how dawn works.

Elizabeth Poindexter’s sumptuous, abundant array of costumes not only delighted the eye but also commendably informed the station of the characters. Ms. Poindexter was ably abetted by Dave Maier’s telling wig and make-up design, which complemented the historical fantasy concept. I might have wished for a more eccentric, troubled, gypsy look for Azucena, but I respect the committed decisions the team made. 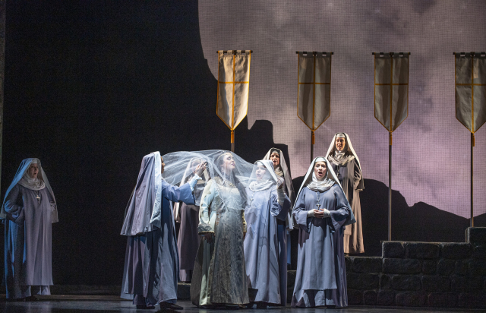 Leonora (Kerriann OtaÒo) who, believing her love has died, prepares to take the veil and enter a convent.

Enrico Caruso famously quipped the “all you need for a successful production (of this opus) is the four best singers in the world.” Even the world’s major houses are challenged to meet the starry demands of Il Trovatore, but if you want to know who the next major international proponents of these roles will likely be, you need not look much further than the skillful assemblage on stage at the California Theatre.

It is called The Troubador after all, and Mackenizie Gotcher was simply tremendous in the titular assignment. Mr. Gotcher is perfectly equipped to excel in the challenging role of Manrico, with his strapping good looks, ringing heavy lyric tenor, and consummate musicality. There is no aspect of this daunting assignment that eludes him, be it the stentorian thrills of “Di quell pira,” the honeyed sentiments of “Ah! si ben mio,” or the gripping exchanges with Azucena.

Gotcher has true squillo in his sizable instrument, and he lavishes Verdi’s potent writing with personality and deeply felt emotions. The road ahead seems bright indeed for this polished, poised performer. His star turn alone is worth the price of admission. Happily, he is in good company.

Mezzo Daryl Freedman is on her way to becoming a force of nature in the Zajik mold with her powerful, knowing interpretation of the willful Azucena. Ms. Freedman’s well-schooled instrument was even from top to bottom, and she knows how to knit her registers with consummate skill. With a rich, ripe middle range, a searing, pliable top, and round, booming chest tones, this treasurable vocalist found every variation of intensity in the opera’s most complex role. I hope that future outings will find this gifted interpreter delving even deeper into the dramatic subtext. 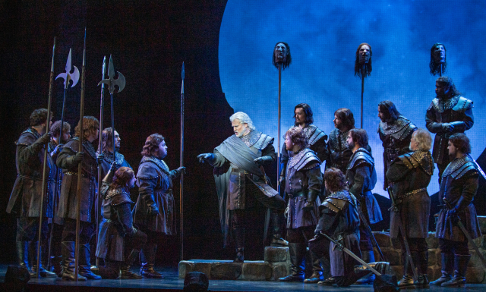 Eugene Brancoveanu is a mellifluous, malevolent Count di Luna. His baritone is a marvel of tonal beauty, buzzing with virility, and eminently flexible. Mr. Brancoveanu invests the many repetitive confrontational declamations with admirable delineation, and he avoids the trap of barking the accented scale and arpeggiated passages. He displays enviable ease in the upper reaches of the part and finds some welcome brighter swings in the Count’s mostly dark intentions.

I only wish that this fine singer could find a bit more breath control for the Bellinian stretches of his character-defining aria, for I found that his choppy phrasing and snatched breaths somewhat defeated the beauty of the long-drawn lines of “Il balen.” Most everywhere else he excelled, no more so than in the well calibrated last act duet with Leonora, the accomplished performer Kerriann Otaño.

Ms. Otaño’s warmly radiant, substantial soprano was a lovely complement to the roster. Her Verdian sense of line and her deeply experienced, conflicted feelings were manifest in a role traversal that was long on beautifully modulated tone and knowing generosity of utterance.

Like many a famous interpreter of this difficult assignment, once past the pitfalls of successfully negotiating “Tacea la note placida” and its angular cabaletta, the soprano relaxed into a luxuriant outpouring of sound and sentiment that dominated her every appearance. Her defiant, armed stance against Manrico’s opponents spoke volumes about the depth of her theatrical resolve.

Although Caruso addressed the demands for the four principals, there is a fifth requirement for a fine Trovatore, namely Ferrando, who has the unenviable job of setting up the whole unlikely scenario in his lengthy opening appearance. Luckily, local favorite Nathan Stark conquered in that daunting responsibility, and he delivered in spades, with a potent and pointed delivery of “Di due figli.”

Mr. Stark has a sizable, pliable bass-baritone that limns the tale of two rival brothers with tragic urgency. Moreover, he commands the stage with a winning presence and cunning command of nuance. It is not often that you will encounter this opening scene invested with such artistry and dramatic interest. He is greatly assisted in his efforts by the excellent exclamations from Christopher James Ray’s well-tutored chorus, who were outstanding all evening long.

A final vital component in the evening’s success was Joseph Marcheso’s conducting of a responsive and highly skilled orchestra. Maestro Marcheso displayed full command of this almost bare bones structure of the middle Verdi canon, and he managed to invest the repetitive bass-chord-bass-chord progressions with meaningful forward motion. He also partnered his vocalists with consummate collaborative effort, even though the soloists sometimes lagged just a bit behind the beat in more urgently rapid passages.

At the end of the night, the excitable opening night audience was clearly delighted with the riveting music making and lavished the performers and creative team with a vociferous appreciation. This winning mounting of Il Trovatore is not only top professional quality, but it is also excellent entertainment value at Opera San Jose’s reasonable pricing. Come to the California theatre early and you may also get treated to a pre-show pops recital on the historic organ in the atmospheric lobby.

All photos by David Allen courtesy of Opera San JosÈ