I have sometimes thought the Barbican Hall is an unforgiving place for a
song recital – it certainly proved so for Diana Damrau when I heard her
here last year. This was absolutely not the case for the Lise Davidsen.
Launching straight into Brahms’s ‘Auf dem Kirchhofe’ the enormity and
grandeur of the voice almost knocks you over. If the sombre setting of this
song might seem a slightly odd place to begin a recital, it’s the template
of the music itself which demonstrates all that is so compelling about her
vocal command. The switch in register, the seamless joins between the notes
as if they are woven from the same cloth, the faultless way in which the
accents are shaped are all absolutely beautiful to hear. The way in which
she could just descend into a pianissimo had all the effect of
suspension in gravity.

Many of Brahms’s songs owe a huge debt to Schubert and their very Germanic
nature, along with the composer’s typical compositional style, don’t make
them suitable for every kind of soprano. They do for Davidsen. ‘Liebestrau’
makes full use of a singer’s dramatic range. The song might be simple in
genesis, but musically it is miniature opera, set magically in dialogue
with the bass register of the piano to mirror the conversation between a
mother and daughter. The depth of her tone here was sumptuous – and yet it
remained entirely feminine. ‘Von ewiger Lieber’ struggles between two
worlds of darkness and light; the effect of James Baillieu’s often
blackened embers on the piano emerged through the shadows into Davidsen’s
ravishing, flaming embers of hope.

Schumann’s ‘Gedichte der Kˆnigin Maria Stuart’ – five songs which form a
biographical history of the Scottish queen’s life from the birth of her son
through to her final prayer before her execution – can almost seem like an
autobiographical moment in the life of Schumann, especially in his final
years. There is little that is romantic about this music; though, they are
Romantic in a very mid-nineteenth century context. Mary Stuart’s fate seems
closely intertwined with Schumann’s aborted drowning, and his admission to
an asylum – but it’s the astringency, rawboned and sparse contours of the
songs which demand most from the soprano singing them, all of which this
singer can evoke from her voice. Davidsen avoided lyrism almost entirely,
even in the second song “Nach der Geburt ihres Sohnes” which reflects on
the birth of Mary Stuart’s son. Again and again, she touched on the
feminine in her voice, even though the striking sparseness in her tone
could easily have pushed her into somewhat less delicate territory. Nothing
quite prepared us for the simply shattering power Davidsen and Baillieu
brought to the prayer and her execution, “Abschied von der Welt”. It simply
chilled me to the bone. The voice here was less dark, simply bleak, and yet
the devastation was palpable. This was an execution that reminded me of the
terror that Berlioz gave us in his ‘Marche au supplice’ from his Symphonie fantastique. 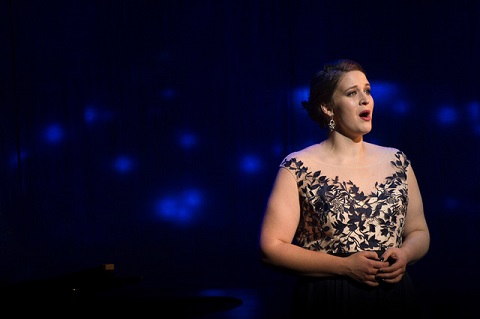 The first half ended with Sibelius’s ‘Luonnotar’. The work was originally
written for soloist and orchestra (and premiered in Gloucester in 1913) but
Sibelius subsequently reworked it for piano and soprano. Its challenges are
formidable – in its length, its intensity and its vocal demands, and
perhaps even its language. The performance which Lise Davidsen gave was as
definitive as any I’ve ever heard, closer to Sˆderstrˆm in its ravishing
storytelling than lighter sopranos who have attempted it. But, the range of
the voice was also exceptional – everything minutely in place, from the low
chest register right up to those vertiginous octaves. Her ability to
sustain drops in notes, often between attached words, was simply
breath-taking.

The Sibelius songs which followed were less virtuosic, though in a piece
like ‘Little Lasse’ it was the essence of lullaby which Davidsen charmed us
with. The calibre of this romantic voice, with its sunlit and glowing
warmth, was ample enough in ‘The first kiss’, just as in ‘Was it a dream’
she spun a lustrous wave of melody that swept like a first romance against
James Baillieu’s lushly poised piano. The three Grieg songs, whilst drawing
on German Romanticism, can altogether seem more despairing – songs of
denied passion, death becoming, the charting out of anguish and dissolving
intimacies are but short – although dense – poems, but Davidsen brought to
them a bewildering range of detail and emotional depth.

The rest of the recital was devoted to Richard Strauss, the composer who
had caused me to wonder what I was missing in Lise Davidsen’s voice. In
this recital – if not on disc – she was simply stunning. Opening her
Strauss songs with one of Strauss’s greatest, and most taxing, ‘Zueignung’,
I was slightly reminded of the maxim that pianists are best advised to
avoid opening a piano recital with Mozart. It didn’t matter here. The
architecture Davidsen is able to bring to Strauss songs is very notable –
she builds crescendos with superb convexity, the arc of many of them almost
curving from the pages of the scores like a crescent shaped moon in its
perfect symmetry. There is absolutely no breaking of the line, no pause in
the breath between words – every note is amply supported. It’s very rare,
in fact non-existent, to hear this singer clutch at words. Strauss does not
avoid drama or theatre in ‘Zueignung’ and neither does Davidsen – and her
final “Habe Dank” was one of the best shaped, rising from nowhere, and most
thrillingly held, I have heard for absolute years.

‘Allerseelen’ is quite a contrast, though a song with rather multiple
interpretations. I think Lise Davidsen rather saw it more as a
commemoration of love rather than an attempt to revive a lost one – there
were touches of mystery in the voice, less pointed references to the past.
‘Die Georgine’ – The Dahlia – a song less heard in Strauss recitals has
considerable beauty to it, blazes of colour in both the voice and piano
that are fragrant of the flower’s florets and striking blossom. Here, she
brought a humanity to her voice as the music reflects on pain and joy of
love. ‘Wiegenlied’, which had been slightly distant and inclined towards
being rather straight, in my view, on her disc with Salonen, was here quite
the opposite. There was a luxuriousness to the tone, a warmth which suited
the darkness of her voice – those majestic tones, the hues of colour which
seem rather unique to her. Taken at a beautifully slow pace, the lines
opened up with impeccable ease, the control in the breath almost completely
singular from bar to bar. ‘Malvern’ is rather close to the Vier letze Lieder in style and meaning, its intimacy just as
challenging. The piano’s solo interlude, its soaring lines, but demand for
the singer to perhaps hold back a little, brought much out of Davidsen.
‘C‰cilie’ brought us full circle to the taxing opening of Strauss songs,
the voice as rich as Christa Ludwig’s used to bring to this music.
Everything about Davidsen’s performance of it leaned towards its rapturous
lines, but there was no lack of unconstrained ecstasy or radiance behind
the words either. The crescendo was simply flawless, rising like an eagle
in flight, the breath control configured to seem almost infinite. In every
way, James Baillieu was an impeccable partner.

Rather unusually, and perhaps not causing any distraction, much of this
recital was accompanied by varying degrees of light. Small boxes scattered
around the stage seemed to add intimacy, and in other songs the wooden
organ pipes were bathed in blues, reds and greens. At times, her dress was
simply the single focus of light twisting in spirals on its bodice. This
all added to a recital which was a journey through the art of song; but it
was also a recital which was an artistic triumph and, I think, one which
will be remembered for quite some years.