The Orchestra National du Capitole earned its international reputation in the late 20th century with its conductor Michel Plasson and has retained its stature as one of France’s finest symphonic ensembles into the 21st century. Its quality was well evidenced at the fifth (and final), highly polished performance of Parsifal. Orchestrally there was an unfaltering beauty of tone throughout Parsifal’s wide dynamic register and its evolving intensities, and a suppleness of ensemble that softly and quite precisely sculpted Wagner’s unending flow of motives.
Conducting was Frank Beermann, long associated with an ongoing (since 2002) Wagner project at the Stadttheater Minden (near Hanover). Like many conductors Mo. Beermann takes much slower tempos than those prescribed by Wagner himself, resulting in a quite long evening. Nonetheless it efficiently spread the mysteries of Wagner’s rite of redemption into a musical and dramatic structure that entranced the audience for those many hours. Maestro Beermann and the orchestra were awarded a huge ovation when it was all over.
Toulouse assembled a remarkable cast led by Austrian tenor Nikolai Schukoff as Parsifal. Lithe and handsome Mr. Schukoff is not Wagner’s fool. He is a male force (a hunter and a lover) that Wagner will redeem with the help of opera’s most complex, enigmatic heroine Kundry. French mezzo-soprano Sophie Koch was the Kundry in her role debut. She reads as a beautiful, sexual woman. She also projects an intelligence befitting a woman who feels and demands to understand the conflict and contradiction of body and soul that consume her.
Kundry’s second act seduction of Parsifal and Parsifal’s resistance was the epicenter of director AurÈlien Bory’s staging of Wagner’s quest of salvation. Kundry was its key, Mme. Koch exploding vocally and emotionally. The stage was blank except for a narrow, dark wall against a pale glow. Kundry in a dark green gown stood in the glow on one side, Parsifal, in white, on the other as they began their epic encounter concert style. Eventually it became a physical brawl, the two bodies and minds in physical and intellectual battle. [see lead photo] 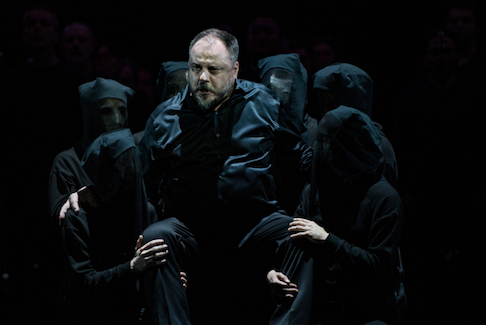 Matthias Goerne as Amfortas
German bass-baritone Matthias Goerne was Amfortas. The wounded king was laid out in a horizontal chair carried by ninja-like bearers. Dressed completely in black he was tipped up to deliver his three excoriating monologues. Mr. Goerne, a lieder singer by choice, plumbed the depths of philosophical suffering with a profound musical intelligence in the voice of an operatically heroic bass, awesomely rising to his feet in his most intense moments.
Director Bory and his designer Pierre Dequivre worked with few scenic elements, each there for specific choreographic purpose — they were kinetic. The lance was a tube of light that sometimes lighted the face of someone in its wake. The tube was sometimes duplicated into many tubes of light that moved choreographically. The swan was a shadow puppet magnified onto a suspended slightly circular drape that then served as a gigantic reflecting surface for the immense Act I shadow revelation of the chalice.
A huge metal grid lay on the stage in Act I through which Gurnemanz appeared with his companions, the grid disappearing into the loft for the procession to the grail, Gurnemanz was sung by British bass Peter Rose in Falstaffian fashion though he attained true philosophic stature in his third act baptism of Parsifal. 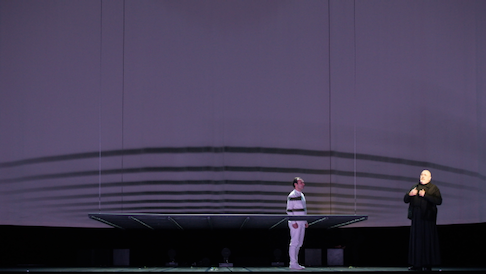 Act I, Gurnemanz leads Parsifal to the grail
Circus-like the opera’s protagonists interfaced with the physical apparatus on the stage, the third act a huge cube of individual lights suspended in a black void. The lights illuminated in various configurations and intensities among, behind and over the protagonists to attain maximum illumination at musical and philosophical climaxes. Finally Parsifal, having shed his black knight attire, achieved his apotheosis, his salvation standing upon a cube, again in the white suit of his Act I entrance, now bathed in intense white light. The orchestral ascension that closes the opera found the male chorus on the stage in regimented formation echoing the geometric perfection of the cube of illuminated lights.
Director Bory has a huge presence in Toulouse, and this Toulouse Parsifal may well amplify that presence into a much, much larger, international sphere. Making Wagner’s enigmatic opera make perfect sense in a flow of light and dark encounters, really nothing more, was a monumental achievement.
Mr. Bory was assisted by Toulouse choreographer and Flamenco dancer StÈphanie Fuster with whom he frequently collaborates in dance pieces. Of great effect was the highly choreographed staging of the Flower Maidens, the six veiled singers lined across the stage, the choreography nothing more than the lifting and falling of their veils.
Michael Milenski