This led not to the political and patriotic work that Verdi wished for but
to an essentially domestic drama based on a play by Schiller; the first
time Verdi had worked on a purely bourgeois drama. And the longer gestation
time allowed Verdi to experiment with ideas learned whilst he was in Paris
supervising his opera Jerusalem, so Luisa Miller makes a
far greater, and more sophisticated use of the orchestra including two
substantial orchestrally accompanied recitatives, and has a new flexibility
when it comes to form. We can feel Verdi, almost for the first time,
shaping the music to the drama rather than fitting it into pre-existing
conventional forms.

The opera, however, is perhaps harder to love than the three operas which
came after it, Rigoletto, Il trovatore, La traviata; the characters are all in some way unsympathetic
except for Luisa herself. So, it tends to be an opera which is admired and
revered rather than loved. Certainly, it has not been seen much on the
London stage; there was a rather old-fashioned Filippo Sanjust production
at Covent Garden in 1978 which received its final revival in 1981, and then
a modish Olivier Tambosi production there in 2003 which was never revived.
Apart from that there hasn’t been much else beyond valuable concert
performances from other opera groups. I was lucky enough to see the work at
the Metropolitan Opera in New York in the 1980s with Luciano Pavarotti as
Rodolfo, again in a very traditional production. None of these, however,
seemed to be able to make a strong case for the piece as drama.

For the new production of Verdi’s Luisa Miller at the London
Coliseum, English National Opera invited the young Czech director Barbora
Hor·kov·, and drew together a strong cast with Elizabeth Llewellyn making a
welcome appearance in the UK as Luisa, David Junghoon Kim as Rodolfo,
Olafur Sigurdarson as Miller (his ENO debut), James Creswell as Count
Walter, Soloman Howard as Wurm, Christine Rice as Federica and Nadine
Benjamin as Laura. Sets were by Andrew Lieberman with costumes by Eva-Maria
Van Acker, choreography by James Rosental, lighting by Michael Bauer.
Alexander Joel conducted. The translation was by Martin Fitzpatrick.

Barbora Hor·kov· was a finalist and prizewinner at the Ring Award Graz in
2017 and received the Best Newcomer Award at the 2018 International Opera
Awards. We caught her production of Verdi’s early comedyUn giorno di regno at the Heidenheim Festival in 2017. Luisa Miller was a co-production with Oper Wuppertal where it has
already been performed, but in an article in the programme book Hor·kov·
made it clear that the production had been extensively re-worked (and
re-designed) for London (a glance at the Wuppertal production photos in the
programme book confirmed this).

The plot is a mixture of family drama and class struggle. Miller (Olafur
Sigurdarson) is a retired soldier who expects his young daughter Luisa
(Elizabeth Llewellyn) to be a comfort in his old age and is opposed to her
being wooed by the mysterious Carlo (David Junghoon Kim). Carlo is in fact
Rodolfo, the son of Count Walter (James Creswell), the local lord of the
manor. Walter and Rodolfo are at odds, and Walter has a guilty secret, his
murder of his cousin enabled Walter to inherit the estate. Central to this
is Walter’s steward Wurm (Soloman Howard) who lusts after Luisa himself,
and a complicating factor is that the young Rodolfo witnessed the murder.
Of course, it ends badly. 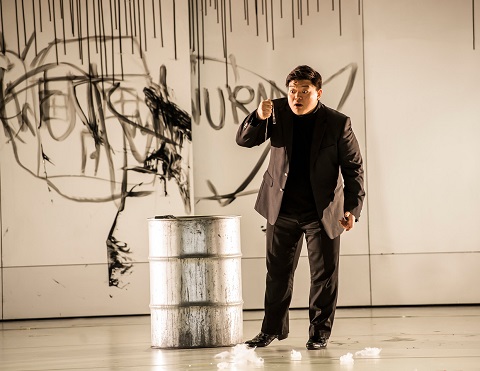 Hor·kov· told the story with clarity, and with no additions and
subtractions; she told the story with and through the music (her only
alteration was that Wurm did not die at the end). Her chosen language was
that of European regie-theater, a style which we do not see
regularly in the UK. It is perhaps worth bearing in mind that Hor·kov·’s
theatrical language would be familiar to many of the opera-goers in
Wuppertal. It is also worth bearing in mind a comment by Bernard Haitink.
He conducted the Richard Jones production of Wagner’s Ring Cycle
at Covent Garden; though Haitink famously had doubts about the production,
he conducted it because Jones drew such superb performances from the
singers and said that it was impossible to dissociate the production from
the musical values. So, coming out of this production saying we enjoyed the
singing but disliked the production style is doing Hor·kov· a disservice.

Whilst I have no particular enthusiasm for this style of production, I have
no objection to it either. As I have said, Hor·kov· told the story with
clarity and drew strong performances from her cast as she drilled down into
the more complex psychological underpinning of the story. Though it is
clear from the interview with her in the programme book that every detail
meant something, the visual style of the production was rather too
cluttered, what with clowns, balloons, two children representing the more
innocent side of Luisa and Rodolfo, dancers who according to Hor·kov·
represented the Darkness which was personified by Wurm, the white walls on
which people scrawled, the ubiquitous use of a tar-like substance which
seemed to get everywhere.

But this emphasis on the psychological paid dividends in the performances
which were outstanding, and for the first time I experienced Luisa Miller as riveting drama. It helped that for Acts Two and
Three, Hor·kov· allowed us to concentrate on the singers and these two had
a far greater sense of focussed drama. We should also bear in mind the
negative benefits of Hor·kov·’s style, the production lacked the
trivialising prettiness of a traditional staging, she stuck to the story
and didn’t give us her version of Luisa Miller, and there was no
over-sexualisation of the plot. Eva-Maria Van Acker’s costumes, whilst
being of mixed eras and styles (including the chorus in vaguely clown-like
Day of the Dead style), gave us a clear distinction of the class layers in
this work. Class is important in many 19th century operas, and too many
opera directors tend to play this factor down. And those white walls,
whilst writing on white walls is a bit of a tired trope I did love the way
that black dribbled down them in the second half, giving us a visual
metaphor for the way the Darkness encroached. Though the cleaning and
laundry bill each night must be huge! 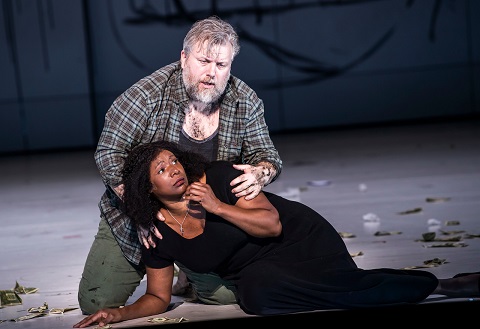 Technically there are three leading roles (Miller, Luisa, Rodolfo) and
three smaller ones (Walter, Wurm, Federica), but the smaller ones received
such strong performances here that we had little sense of this hierarchy,
instead there was a superb ensemble feel supporting strong individual
performances.

Elizabeth Llewellyn was outstanding as Luisa, a young woman who has to grow
up quickly and face the real world. She had the flexibility to sing Luisa’s
often elaborate vocal writing whilst being able to draw out a strong,
shapely vocal line. She also conveyed Luisa’s psychological journey with
great intensity, Llewellyn is a singer who is able to convey much with face
and with eyes, this was an intense and gripping experience.

She was well partnered by David Junghoon Kim as Rodolfo. Kim was vivid and
tireless in the role, and whilst he did not have the ideal open-throated
Italianate sound, he sang with a wonderful intensity whilst giving us a
gorgeous mezza-voce for his cavatina at the beginning of Act Three. We
never really see Luisa and Rodolfo/Carlo in happier times, but their final
long scene as the two lay dying was transcendently magical. The men in the
opera are all various types of shit. Whilst Rodolfo happily dupes Luisa, he
immediately jumps to conclusions when things go wrong for her.

Her father, by contrast is simply a selfish old git, he pretends to be
concerned for her welfare, but he really wants her as a comfort for his old
age. Olafur Sigurdarson managed to make the character human, if not
entirely sympathetic, and in Act Three when released from prison both he
and Llewellyn captured the sense of trauma that the characters have gone
through. Sigurdarson’s singing was admirably strong and focused, with a
great feeling for Verdi’s line though there were moments when I worried
that he was trying a bit too hard.

Wurm is traditionally portrayed as ugly in some way so that his exterior
matches his evil interior, but Soloman Howard’s Wurm was anything but.
Tall, handsome, physically fit (we got a good view of his upper body
muscles) and sexy, Howard was completely mesmerising and disturbing. On
stage for a good bit of the time, Howard’s presence as Wurm radiated his
sense of control and contributed considerably to the character’s
omnipresence in the plot. Howard sang with a fine, dark line making Wurm as
vocally seductive as he was physically, this was an amoral character whom
it would be difficult to resist. 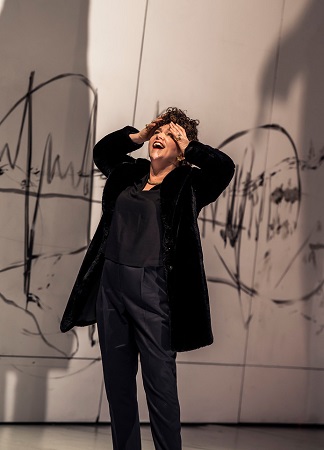 James Creswell had a different, but equally strong presence as Count
Walter; Creswell was the embodiment of entitlement as well as a certain
amorality, but also an underlying weakness which was his downfall.
Christine Rice was a complete delight as Federica, and we wished Verdi had
got his way and made more of the character. Nadine Benjamin, in fine voice,
seized her moments as Luisa’s friend Laura. Adam Sullivan (a member of the
ENO Chorus) gave sterling support as a citizen (in the original, a
peasant).

Perhaps more important than individual performances was the terrific
feeling of interaction between these, so that the duets and ensembles fair
crackled, the dialogue gripped and flowed particularly the scenes between
Miller and Luisa, and Luisa and Rodolfo in the last act, creating some fine
musical drama.

Andrew Lieberman’s sets with their large flat surfaces provided valuable
support to the singers, and the expanded ENO Chorus was in terrific form.
This was one of the first operas in which Verdi actually made the chorus
part of the action; here they are fellow villagers, and the chorus members
really seized their opportunities and created a strong dramatic presence.

In the pit, Alexander Joel drew impressive playing from the orchestra, this
was an impulsive and dramatic performance. Joel clearly knows and
understands Verdi, and this was an account of the opera where the drama and
the music were linked, so that moments like Verdi’s important long
recitative sections were finely fluid, whilst the big moments were
thrilling.

By the end of this evening it was impossible not to be gripped by the
drama, and to be fully engaged by the music. ENO had put together a strong
cast, and Joel and Hor·kov· drew from them some thrilling drama and very
fine Verdi singing indeed.