The original 1997 production born in Nancy (near Strasbourg) was revived in Nantes (the central Atlantic coast) in 2015 and seen in Saint-…tienne (near Lyon) in 2016, in Nice in 2017 and in Toulon (near Marseille) in 2019 before arriving finally just now in Marseille. All the editions have been staged by the original stage director Alain Garichot though with completely different casts, often Russian, and conductors.
The OpÈra de Marseille hit the casting jackpot with a quartet of lesser known French singers (and one ringer — Nicolas Courjal as Gremin) and with young American conductor Robert Tuohy, now music director of the OpÈra de Limoges (center southwest of France). The maestro was the ever present, matter of fact purveyor of Tchaikovsky rich panoply of expressive themes, his woodwinds dancing to intensify every movement of poetic beauty flowing through the words of Tchaikovsky’s self made libretto. Mo. Tuohy let Tchaikovsky’s opera be about the words of Pushkin’s troubled lovers, carefully parsing the orchestral phrasing to support these eloquent speakers. And sometimes letting loose with shattering fortes when only the orchestra had something to add. 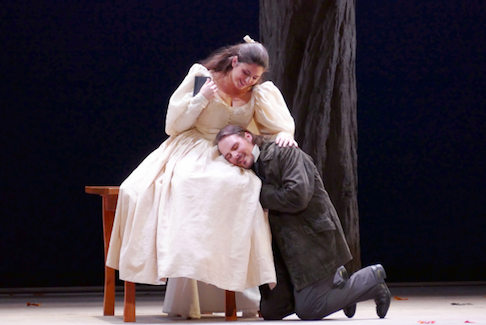 Emanuela Pascu as Olga, Thomas Bettinger as Lenski
And speak they did, each of Pushkin’s characters pouring out their hearts in performances that were not about singers and singing, these were human beings who opened their hearts, intimately, laying bare their raw souls. We sat spellbound, rarely, and reluctantly interrupting the flow of emotion by applauding the famed arias.
Baritone RÈgis Mengus brought grace and elegance to Pushkin’s bored, existentially “superfluous” hero whose discovery of feeling and change of heart brought an extended, electrifying ending to the evening. In convincing voice he waltzed solo, with consummate skill to his confrontation with Lenski and then coldly shot his best friend in a precisely executed duel. Silently, eloquently he then remained on the stage, lost, during the a vista transformation to Gremin’s ball, months maybe years later.
Tenor Thomas Bettinger sang Lenski impeccably, whose Chopinesque coiffure gave him a poetic presence that made him the poet Pushkin, lest we forget that Pushkin himself was killed in a similar duel. With a spontaneous energy he greeted his intended bride Olga in the first act, then exploded in spontaneous anger in the second act before reflecting on his life, the famed “Kuda, kuda vy udalilis” from an almost detached, closely personal perspective. He then allowed Onegin to kill him — there was only one shot fired.
Soprano Marie-Adeline Henry sang Tatiana, lost within herself, participating quietly, distantly emotional in the wonderful first act quartet of the four women’s voices. She connected with herself in a full, if innocently voiced discovery of her infatuation with Onegin in the Act I Letter Scene. She was then silently, deeply shamed by Onegin’s rebuff. And finally she again connected with her deepest feelings in the final scene with Onegin, this time in a fully lyric dramatic voice, her chagrin turned into electrifyingly personal sacrifice. 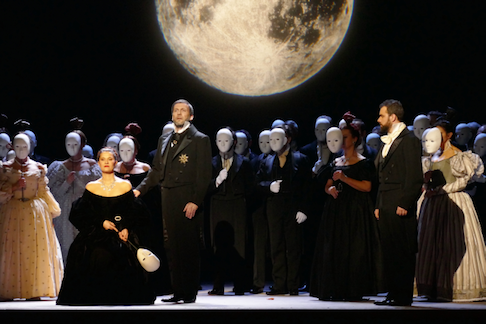 Marie-Adeline Henry as Tatiana, Nicolas Courjal as Gremin, RÈgis Mengus as Onegin
Bulgarian mezzo soprano Emanuela Pascu is making her career in France though she returns to Bucharest from time to time to sing what must be a beautifully voiced Carmen. Her brilliant first act aria moved effortlessly through the Carmen tessatura with a lightness of spirit that made her Olga a charming, capricious if uncomplicated young woman in love who when called upon could add a powerful, vocally dramatic presence to Tchaikovsky’s masterfully constructed first and second act ensembles.
Bass Nicolas Courjal sang Gremin. Mr. Courjal is a powerful presence (once a Phillip II on the Marseille stage) who made Gremin’s aria a song of his enraptured love for Tatiana, a profound, very alive love he had found later in life. This glowing presence of deep love became the emotional backdrop for the opera’s final scene, the shattering realizations of both Onegin and Tatiana that all love was forever lost.
Gifted with this cast of fine singers of appropriate ages, bodies and spirits stage director Alain Garichot can be credited with evincing these deeply personal, intimate performances of this conceptually unadorned production. Mr. Garichot’s directorial prowess comes out of his many years of formation at Paris’ ComÈdie FranÁaise (an esteemed group of classical actors founded by Moliere in 1680) to teach operatic acting at the young artist program at the Paris Opera and other European opera formation programs.
Mr. Garichot used little else than his singers to realize this emotionally pointed exposition of this operatic masterpiece. He needed no scenery nor did he have much. There were but nine soaring, foliage bare tree trunks on the stage that then disappeared into the loft for the Gremin ball. The only backdrop present was precise detail of character in the masterful enactments of Tatiana’s mother Lariana sung by Doris Lamprecht, Tatiana’s nurse sung by CÈcile Galois, the Triquet sung Be …ric Huchet and Lenski’s second sung by SÈvag Tachdijian. Of special notice throughout the first act, infusing inescapable actuality, was the mute presence of the nurse Filipievna’s grandson, the messenger of Tatiana’s love.
When it was all over no one dashed for the exits. We all remained seated for extended, solid applause, though there were some whistles (negative) and boos for select singers, and particularly for the conductor. Marseille lived up to its raucous reputation.
Michael Milenski