We began this journey through time in 2003 with Jˆrg Widmann’s Lied for Orchestra. This is a piece centred on melody – and
centred on Schubert. It is a work of profound extremes, with an orchestra
that is like a Schubert lieder but without being the accompaniment
to it. The tenor of the music is indeed more resonant of Schubert than
Widmann’s style normally suggests, and if there is a focus on song in this
piece it is generated by the orchestra responding to the intimacy of the
instrumentation of a piece like the Octet with instruments characterised by
instrumental solos replicating their orchestral voices. But, what is also
noticeable is what is not Schubert. The debt to Sibelius – especially that
composer’s Seventh Symphony – shines like a floodlight. Even more apparent
is Mahler’s Tenth Symphony, especially the final movement. The use of the
bassoon suggests all its lugubriousness, but it’s the intensity of the
string writing, the swelling violins and dark strings which seem just as
searing in that movement’s terrifying climax; a trio of trombones has all
the effect of overloaded power, the crushing percussion a hammer blow. The
work may travel through styles but it’s musically effective and the London
Philharmonic played it superbly.

Wind back a century to 1903 and we were in the world of evocative song and
ravishing orchestration – Ravel’s ShÈhÈrazade. This was, in many
ways, not an ideal performance but Ravel does not make life particularly
easy for any mezzo who attempts to sing the part. Christine Rice lacked a
certain precision in her French which was magnified, certainly by this
particular orchestra. When Juliette Bausor’s principal flute sounded so
impeccably shaped, with a tone exquisitely given to stretch her lines into
infinity, Rice’s clipping of phrases and tendency to muzzle the distinctive
clarity of what she was singing came across as less than accurate.

But that is not to say that her voice itself is often a beautiful
instrument. Its very depth and sheen can often give the impression of
conveying mystery, although what we got was principally an illusion of it.
That long first song, ‘Asie’, should be a melding of two worlds – one of
beauty the other of horror; but listening to Rice’s version I’m not sure I
got this. There didn’t seem much of either mystery or solitariness in the
line “MystÈrieuse et solitaire”, nor the distinction between “des rose et
du sang” towards the songs close. The panache of the London Philharmonic’s
Spanish-inflected rhythms, its oriental shades of Eastern promise were
highly expressive but simply highlighted the struggle many singers
experience in this cycle.

There are difficulties in the two shorter songs, though I think Rice
managed them slightly better. ‘La flute enchantÈe’ needs to strike a
balance between sorrow and joy and that is largely what we got with Rice
able to bring a mellowness and sense of radiance to her voice.
‘L’indiffÈrent’ is complex in that it can take a mezzo outside her comfort
zone – some find the characterisation of its androgyny difficult to
navigate; others embrace it. Rice leaned towards the latter, but
principally because the voice’s darker more masculine tones hinted at her
ambiguity. 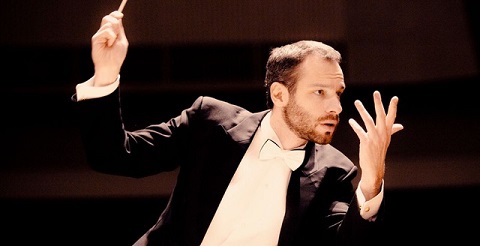 The concert ended in 1803, as it were, with Beethoven’s Eroica.
Despite this symphony being an indisputable masterpiece, it never surprises
me how many performances of it hang fire. This, however, was one of the
most incendiary I have heard in many, many years. I have yet to mention the
conductor of this concert, Dima Slobodeniouk. He is not the most precise
conductor I have seen, but what he does do is shape what he conducts with
great integrity and vision. The gestures are broad in scope as he sweeps
his left hand deep into the orchestra. But what is most impressive is that
magical illusion of making what he conducts seem much faster than it
actually is. The Allegro con brio of this Eroica sounded
quite measured but the sheer electricity generated was absolutely
thrilling. There was no broadness in those opening chords, so I suppose one
might have expected a certain fleetness – but it wasn’t immediately
apparent we would get it.

The Marcia Funebre, on the other hand, seemed to work in the
opposite direction. This was fast, and there was never any sense it was
otherwise. Perhaps the F minor Fugue didn’t quite have sufficient power for
my taste, but Slobodeniouk managed to pull some depth from the LPO’s cellos
and basses which did at least suggest gravity and that plunge into the
turbulent and ferocious development was a thrilling cataclysm of despair. I
think one might have preferred divided violins and a different layout of
lower strings, but we had what we had.

The brilliance of this performance’s Scherzo was entirely down to
the lightness of touch from the orchestra, something which was carried
through to the Allegro molto – its storms, fugues, sforzandos and
wildly fluctuating dynamics articulated with uncompromising brilliance. A
revelatory performance, and one which bookended an often fascinating
concert.