Then there is Patrice Munsel who re-created the role for soubrette soprano for the Metropolitan Opera’s grand opera version back in the 1950’s. Never to be forgotten is Maria Ewing’s delightful PÈrichole in San Francisco Opera’s spring season at the Curran Theatre back in the 1970’s. And of course Stephanie d’Oustrac who triumphed in the role at the OpÈra de Marseille in 2002.
It is good news indeed that Marseille may have discovered a PÈrichole for a new generation. Already on her way to becoming an Offenbach diva mezzo soprano HÈlo?se Mas recently sang stage director Laurent Pelly’s bratty Boulotte (Barbe-Bleue) on the main stages in Lyon and Marseille. Just now Mlle. Mas found herself on the OpÈra de Marseille’s second stage, the ThÈ‚tre de l’OdÈon de Marseille (a 1928 cinema updated to an 800 seat “boulevard” style theater) for a somewhat reduced La PÈrichole.
Not that the PÈrichole of Mlle. Mas was in any way reduced. She approaches the mold of a larger than life diva, radiating a huge personality. It is a bonus that she is a fine singer who sang the role in big, warm and confident mezzo voice. This young artist (32 years old) may be capable of finding a far greater subtlety of character in this role than she projected, though she did create a charming, big-eyed mock innocence that all too often usurped the small stage.
Pedrillo was sung by tenor Samy Camps who brought everything needed to create Perichole’s easily duped, hapless lover. He is charming, young and fun and sings well. He has carved himself a career bringing new life to long forgotten Offenbach lovers in the OpÈra de Marseille’s Offenbach Project, and to delighting France’s regional operetta audience in revivals of once famed works like composer HerzÈ and librettist Henri Meilhac’s comÈdie-vaudeville, Mam’zelle Nitouche.
The balace of the cast, notably the Viceroy sung by Olivier Grand and the Old Prisoner sung by Michel Delfaud, comes from the OpÈra de Marseille’s (and the south of France’s) rich treasury of operetta and character singers. 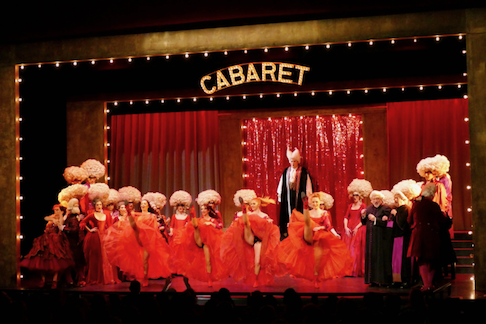 The Can-Can, with wigged chorus
The production was staged by Marseille born Olivier Lepelletier. Mr. Lepelletier organized a minimal set that made the most of the minimal stage space of the OdÈon, erecting four steps up across the back of the state, the center of which was a tiny, curtained proscenium opening, making the scene the cabaret of the three cousins. Minimal adjustments were made to create the second act palace (the chorus was sumptuously costumed) and the third act jail (a couple of benches downstage). Director/designer Lepelletier used the conceit of weird wigs that echoed a bit the idea of the exaggerated costuming of the 1868 ThÈ‚tre des VarietÈs production.
It was absolutely plenty to set the stage where Offenbach’s musical antics to the charmed antics of his famous librettists, Meilhac and HalÈvy triumphed without distraction. It was done with an orchestra of twenty players in the OdÈon’s minimal pit. Conductor Bruno Membrey gave the accomplished performers everything they needed to show off their considerable personalities. It was the pure Offenbach at his minimal, maybe maximal, indeed very pleasurable best.
Mr. Lepelletier incorporated Offfenbach’s 1874 version in so much as he could in his reduction of production requirements, modifying the narrative a bit in the first act to accommodate its placement in the cabaret, gently mocking the clergy as well.
Of great amusement were the four leg-some dancers, one of whom, EsmÈralda Albert, was the choreographer. They were the acrobats of the first act, the high kicking legs somehow avoiding a massacre of the chorus. They then became the guards who hustled Pedrillo and PÈrichole off to jail in jolly synchronized steps, a very charming moment.
It all climaxed in a rip roaring can-can ‡ la Moulin Rouge, with the contortionist dancer, Adonis Kosmadakis, joining the four propelled danseuses to blow us away (it’s hard to see the legs in the photo, but they’re there).
Michael Milenski

Photos by Christian Dresse courtesy of the OpÈra de Marseille