Well, if you’re struggling for ideas, how about a tabula rasa? Johannes
Sch¸tz’s set, already seen at Oper Wuppertal last April, is a white cube.
Four doors at the rear facilitate conveyor-belt entrances and exits. The
cube is hoisted (upstairs/downstairs? – never mind that the soon-to-be-wed
Figaro and Susanna have been bestowed a shabby garret room by the
Count …), and lowered. It’s washed with a lurid Kermit-green glow in Act 3,
then swathed in bubble-gum pink. Confused and anxious protagonists,
red-stockinged domestics and straight-backed valets traverse the space
beneath, disappear behind, climb stairwells to the back doors, and – in the
case of a panicking Cherubino – jump from its heights onto a gymnastics
crash-mat, figuratively trampling gardener Antonio’s roses.

So, Hill-Gibbins wanted to avoid ‘grand ideas about setting, design or
supplementary action’. That’s all well and good – perhaps, very good. We
don’t need a sumptuous architectural embodiment of the
Enlightenment ethos (such as

marvellously supplies); nor the sort of Minotaur mazing and mythic meddling
in which ENO’s last Figaro (

, now presumably dead and buried) indulged. But, theatre does engage all
the senses, and opera-theatre is as much about what we see as what we hear.
The problem with Hill-Gibbins’ blank canvas is that it eradicates all
context to the point that each and every of the characters might as well be
Everyman Anywhere. Neither the historical droit de seigneur nor
our own #MeToo register – no bad thing, perhaps, but how are we to
empathise with these characters if they are just emblematic panto types
scampering round, up and below a white shoe-box? 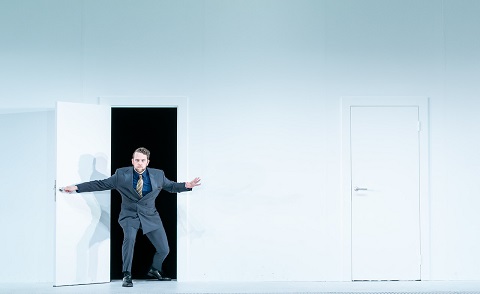 And, given the simplicity (to the point of non-existence) of the design,
the actual execution of the drama is quite often fussy and overly busy. I
had my teeth gritted during the Overture as the doors were flung open,
characters posed for Instagram-ready selfies, and then dashed and
disappeared, only to reappear ad infinitum. “It’s notBluebeard!” I wanted to shout. I could take a little commedia dell’arte ‘knowingness’, but the metatheatre quickly
began to grate. So, Figaro’s resolve to outwit the Count, ‘Se vuol ballare
signor contino’, witnesses the ritual dressing of the Count, with valets
shuffling in with shoes and jacket, and Figaro himself adorning the
over-ardent aristo with a garish neck-tie. Cherubino’s ‘Non so pi˘’ is
accompanied by a cartoonish door-opening slide show of the lives and loves
of the opera’s sex-obsessed men and women. Then, there’s the problem of
what’s ‘missing’ in this white vacuum: where’s the chair in which Cherubino
is to hide when caught in Susanna’s room, for example? The doors which
might be useful in emphasising the faux gentility/real poison of the
Marcellina/Susanna duet, are less effective intrigues of the pivotal Act 1
Trio.

I was irritated most when the ‘comedy’ contradicted the music. In ‘Voi, che
sapete’ Cherubino is misguided, perhaps, but utterly sincere. This is not
the place for a boppy jive in which the Countess and Susanna join a ditzy
adolescent in shoulder-waggling and elbow-churning. And why, if the opera
is, as Hill-Gibbons professes to believe, about ‘character and
relationships’, does he so often position duetting characters at opposite
ends of the white cube in alienation and isolation, as they clutch and tug
at the unforgiving and ungiving walls? Why does Act 2 end with some surreal
body stroking and writhing? Why, if ‘supplementary action always feels
superfluous’ according to our director, does the Countess have to undergo
silent agonies in the suspended cube during the duet for the Count and
Susanna at the start of Act 3? ‘[I]t wouldn’t work to add more
ornamentation or decoration on top’, says Hill-Gribbins. Quite. 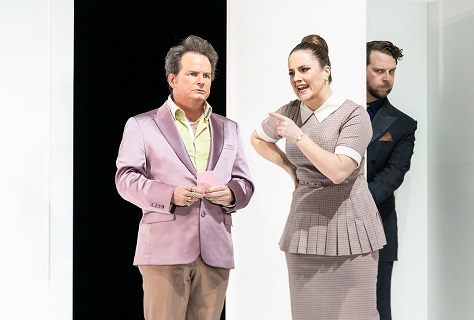 Thank goodness for some truly marvellous singing. Louise Alder’s Susanna is
simply sublime. She nails the comedic mischief with a down-to-earth,
no-nonsense realism that overcomes every directorial artifice. She’s pert
and punchy, sometimes literally as Figaro finds to his peril, but also
absolutely transcendent in Act 4’s ‘Deh vieni’: this aria was an absolute
show-stopper. Despite being dressed in a hideously ugly shirt and then
forced to don a Jimmy Krankie-style ‘military uniform’, Hanna Hipp shines
as Cherubino. Elizabeth Watts isn’t necessarily a very sympathetic
Countess, but given the way the production distances her, that’s perhaps not her fault, and she
certainly has the technical command to convince if not beguile. 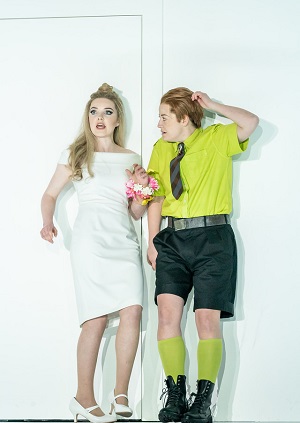 Boûidar Smiljani? is a strong presence as Figaro, balancing wile,
willingness and affection with well-projected, warm-toned candour.
Johnathan McCullough’s Count has just the right mix of menace and misguided
maladroitness. Colin Judson’s oleaginous Don Basilio – a sleaze ball in
silk – made my skin creep, which is just as it should be! Judson – slathered
in a the trademark suntan of the ‘orange people’ – demonstrated terrific
diction and a wonderfully pertinent tonal nasality. I found Andrew Shore’s
Bartolo far too burlesque: ‘La vendetta’, too slow and exaggerated, was a
wobbly hoot. And, Clive Bayley’s Antonio did not venture beyond ‘stock’
clumsiness, though there was nothing wrong with that. 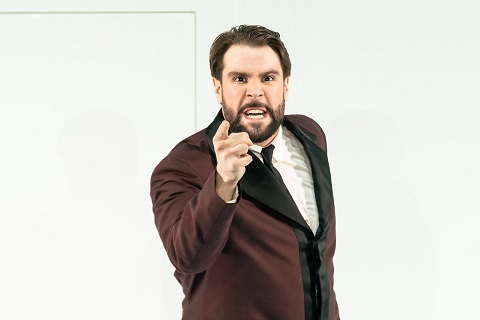 Susan Bickley made Marcellina a character we could love rather than loathe,
and to have Rowan Pierce in the role of Barbarina was an absolute joy: we
cannot have to wait long for her Susanna, surely?

Kevin John Edusei made his debut in the pit. I wasn’t especially impressed.
The tempi didn’t settle, too often stage and band were adrift (the raised
cube probably didn’t help), and there was frequently a lack of clarity from
the small orchestral forces. The continuo ensemble was, however, terrific.

At the close, the Count found himself excluded from the party as the
production-defining doors slammed in his face. A metaphor perhaps for the
doors that will surely close on the capital’s cultural life in the coming
weeks. You’d better catch this Figaro while you can.