Beaumarchais-Mozart’s hyper-sexed adolescent, Cherubino, speaks of love
when dreaming, when awake, and even when there’s no one there to hear his
radiant romanticising, inspired by burning desires he can neither
understand nor control.

In the third of his ‘Figaro plays’, La mËre coupable,
Beaumarchais’s excitable young page enjoys a night of passion with the
Countess Almaviva only for her to suffer pangs of guilt and dismiss her
lover, sending him into spiral of depression, derring-do and death. With
suicidal recklessness he runs off to battle and is mortally wounded. The
Countess reads his dying words of regret and love; shortly after she finds
she is pregnant with Cherubino’s child.

French playwright Francis de Croisset had other ideas. ChÈrubin, the
eponymous protagonist of de Croisset’s 1901 ‘Figaro-sequel’ hasn’t
changed much since his days spent panting in the Countess’s dressing-room
or gallivanting with Barbarina in the nocturnal garden. Now a swaggering,
swooning seventeen-year-old in Seville, he is looking forward to
celebrating his birthday and his new military commission by inviting
countesses, baronesses, the Duke’s mistress and the girl-next-door to his fÍte galante.

Jules Massenet was charmed by de Croisset’s ChÈrubin when he saw
it at the ThÈ‚tre-FranÁais and just two days later he had obtained the
rights to the play in order to set it as an opera, which he termed a comedie chante, with the aid of de Croisset and Henri Cain. The
resulting rococo confection, which bubbles with playful pastiche and
parody, went down well with its first audiences in Monte Carlo in 1905 (the
premiere took place, serendipitously, on 14th February), and
subsequently was well-received in Paris. FaurÈ praised its Mozartian spirit
and grace. 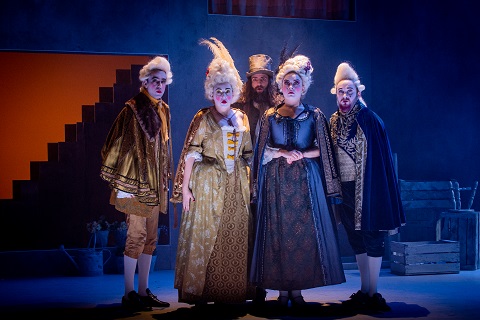 Requiring a large cast, and with copious juicy roles for several female
voices, it’s a good choice for a student ensemble, and Royal Academy Opera
have frothed up a flighty and frivolous evening of fun. Duels are
threatened and diverted. Swords are unsheathed, sensuous serenades sung,
and Spanish dances sashayed. ChÈrubin woos women from dawn to dusk, despite
the warnings and guidance issued by his compassionate and wise mentor, The
Philosopher.

Director James Hurley and designer April Dalton take a tongue-in-cheek
glance towards the eighteenth-century. Period costumes are sumptuous, the
rouge is slapstick and the bygone rococo world is filtered through bright
modern lights. There’s a touch of Peter Greenaway in the juxtaposition of
cool gentility and vibrant excess, as the angled grey walls of Dalton’s set
reveal curtained niches of eye-popping hues. At the start, we might be at
Orlovsky’s party, if only the large cast’s opportunities for hedonism were
not curtailed by the constriction of the design’s small spaces. The back
walls, which push the action quite far forward on the Susie Sainsbury
Theatre stage, also bounce the sound out into the auditorium with energetic
thrust: it’s a busy and boisterous production, and occasionally – for
example, in the moonlight episodes of the second act – a little more
contrast of light and shadow, laughter and serenity, might have been
welcome.

However, these are minor misgivings. This second-night, second-cast
performance was a delight of musical nostalgia, affectionate whimsey and
charm. Massenet clearly enjoyed himself composing this opera and so the
singers and musicians relished performing his exuberant score. Though,
conductor Anthony Legge (currently Interim Head of Opera) didn’t obviously
evince the lilt and grace of French comedy, he ran a tight ship and his
instrumentalists played with terrific precision and verve. There were some
lovely woodwind colours and plenty of Spanish flavour. Legge didn’t seem to
give the singers much attention or guidance, but, then, they didn’t seem to
need it. 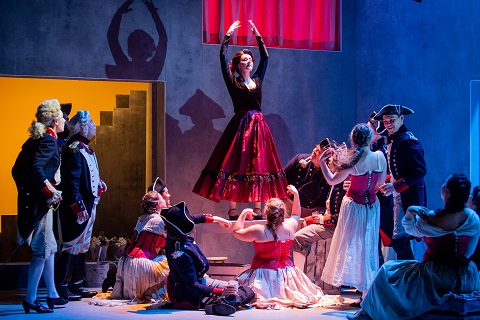 The three principal soprano roles were well differentiated and engagingly
characterised. In the title role, Lithuanian mezzo-soprano Gabriel? Kupöyt?
glowed with dizzying charm and puppyish enthusiasm, by turns frisky,
petulant and introspective. Kupöyt? displayed gamine grace as the would-be
Casanova, chest puffed out in faux-mature posturing. A thwarted opportunity
for sword display resulted in a fit of pique and melancholy: Mozart’s young
page seemed hardly to have ‘grown up’ at all. Infectiously ‘love-drunk’,
Kupöyt?’s first aria, ‘Je suis gris! Je suis ivre!’, dazzled with a lovely
sheen and thrilling bloom, but there was moving and tender sincerity when
the confused young lover asks The Philosopher to explain why the merest
thought of a woman so inflames his heart with uncontrollable passion. Bass
Ossian Huskinson was a strong, dignified presence as The Philosopher,
displaying a warm, generous tone, and sonorously sharing his wisdom with
his charge.

As the Spanish dancer, Ensoleillad, Grace-Marie Wyatt used the plush layers
and fruity lower range of her soprano to show us why she had ensnared the
Duke’s heart. Sensuous and impetuous, this Ensoleillad enjoyed the favours
and admiration bestowed upon her but kept a cool head when required. Her
aubade, ‘Vive amour qui rÍve, embrasse, et fuit’, was beautiful, and
ChÈrubin – still reeling from the heady scents of the sweet love-duet that
they sang at the end of Act 2 – would have done well to heed her words:
“Long live love that dreams, blazes and flees,/ Long live love that dies in
one night.”

Samantha Quillish impressed in all three of RAO’s 2019 productions, most
especially in the title role of Tchaikovsky’s


, and here she was outstanding as Nina, the ‘nice girl’ whom ChÈrubin
overlooks as he chases his aristocratic darlings. Her act 1 aria was a
lovely moment of simplicity and stillness amid the revelry and carousing,
and in the final act – a sombre figure in black, as Nina prepares to enter
a convent – she sustained a sense of sincerity when things took a
sentimental turn.

In the comprimario roles of The Count and The Baron, James Geidt
and Dan D’Souza were convincingly patrician and urbane, while Camilla
Harris (The Countess) and Elspeth Marrow (The Baroness) were mischievously
entertaining as two bored aristocrats in search of some fun. Maxwell Levy
(Capitain Ricardo), Andrew Johnston (The Innkeeper), Peter Harris (The
Duke) and Connor Baiano (Officer) made up the fine cast, and there was
lively support from the 24-strong chorus who nimbly negotiated the steps,
stairs and niches of the set.

When a rare moment of common sense throws ChÈrubin into Nina’s arms and the
young lovers creep away, Massenet and his librettist have one last laugh.
As Ricardo and The Philosopher wryly identify them as ‘Don Juan’ and ‘Donna
Elvira’, the orchestra strikes up ‘Deh vieni alla finestra’. Will Nina
become just one of the ‘mille e tre’ seduced Spaniards in ChÈrubin’s
catalogue of conquests? It’s hard to believe: Massenet’s music is too
sweetly sentimental, surely?

The esteemed nineteenth-century critic and scholar, Adolphe Jullien, an
early admirer of Massenet, summed up the composer’s allure: ‘On leaving the
theatre when this froth of sound has subsided, one feels a trifle
embarrassed at having allowed one’s self to be carried away; and if one
wishes to probe to the core this dazzling, shimmering music, it is easy to
see that there is in it little substance and novelty. But when the curtain
goes up again we promptly come under its spell once more, and again we feel
the lively attractiveness of this fresh and sparkling music. A great
magician in truth, is the composer of ChÈrubin.’

This production certainly sparkled with the spirit of make believe and held
us under its spell.