A Venables opera is not a comfortable experience.

, which I reviewed in 2018, is drawn from Sarah Kane’s final full-scale
play, though it is a work which often seems less like drama and more like
opera in its theatricality. In one sense, this opera is almost like a
prelude to the drama of Denis & Katya. Parallels with Wagner
might not seem that obscure or unusual to make. There isn’t any link
between the dramatis personae that threads these works together; but very
like Wagner, there are motifs and themes which are common – and very
uncommon – to both. The orchestral forces differ between the two operas,
but what they share are spatial symmetry and a kind of Morse code in the
sound that is sometimes generated. If 4.48 Psychosis is about
psychological fragility, the descent into madness, a suicide note drenched
in the poetry of opera then Denis & Katya is almost the
obverse of this. There is nothing fragile here, rather it’s the tornado of
a psychological breakdown, a madness that is violent, a suicide note that
is played out in public and broadcast in a language that eschews the poetic
into something entirely demotic. One suicide is very private as we
experience a mind disintegrating; another suicide is entirely public as it
is played out over social media. Psychosis can be an internal civil war, or
it can be one that’s like a video game.

Both Kane’s 4.48 Psychosis and Denis & Katya are
autobiographical though in highly different ways and witnessed through very
different microscopes. Kane’s was a vast monologue, a torrential emotional
topography which ended up haunting and tragic from a deeply personal
perspective. Denis & Katya is entirely narrative based, though
the panorama we see through the webcam and lens of the website, Periscope,
is entirely voyeuristic. What violence and tragedy unfolds happens
exponentially – the greater the audience becomes, the more extreme the
action and drama becomes. It was never unavoidable during this period of
cabin fever that the complicity of a world-wide audience tagging each other
would be anything other than explosive in its outcome. The case of a virus
going viral. And, all that separates the audiences of this tragedy through
time is the notion of our distance to it. Whether it be the real time of
the events themselves, or the narrative describing the past, the voyeurism
of who is watching it is unchanged.

What obviously makes Denis & Katya more compelling – even for
Venables and Huffman to get on this particular bandwagon – is who Denis and
Katya were. Read newspaper cuttings from the time (a relatively recent
2016) and you’ll find these are a couple of Russian teenagers invariably
described as “beautiful”; almost all the photographs that exist of them
show them to be clearly in love with each other. What precipitates tragedy
in all love stories is disapproval, that love is somehow forbidden. The
parallel for the media was Romeo and Juliet but it could have been Tristan
and Isolde. Add in a shoot-out and aggressive, aimless hedonism and you
come closer to something like Gregg Araki’s The Doom Generation, although
perhaps the celebrity culture which these dysfunctional teenagers began to
crave resembled more Oliver Stone’s Natural Born Killers. But where it is
easy to find sensationalism and exploitation in a story about youth and
suicide Venables and Huffman are sensitive to their tragedy. This is an
opera about Denis and Katya but there are no Denis and Katya. Instead, the
events are narrated entirely by six characters, and performed by just two
singers.

Because of this what we get is a story that is second-hand at best. It is
derived from crime-based reconstructions, documentaries, interviews – and
some of it is fictionalised. Even the outcome itself is uncertain, a
suicide off camera, just as in all Greek theatre where tragedy often
happened off-stage. (This ‘unseen’ suicide has indeed been a source of
speculation and fake news ever since.) But there is nothing Sophoclean or
Aeschylean about this story except in the rewriting of the role and
function of the Greek Chorus. No longer narrating what the protagonists of
this drama are doing, they have become actors looking inwards on their
webcams, directing the action, no longer just spectators but ones who will
become deeply implicated in its outcome. 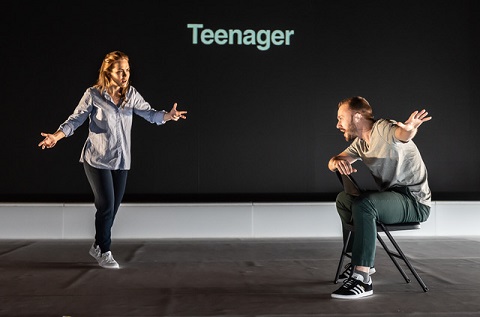 How far this approach to Denis & Katya blurs the lines between
theatre and opera is a thin one. The very concept of narration means much
of this opera is spoken rather than sung. This doesn’t always work in its
favour. I found the concept of translation, which was only needed for the
Russian text, overused when it was applied to the English text as well. As
a kind of vocal doubling it worked – but you can have too much of a good
thing. The opening prologue – which is long – sets the scene but is hugely
descriptive because there are no sets. Any kind of visual set requires very
little imagination from its audience – what you see is exactly that. A TV
set is described in some detail – where it is, the kind it is – but this is
important because it is a central part of their story. It isn’t so much
something they watch but something which becomes rooted in their violence –
it is blown apart with a shotgun and eventually thrown through a window.
Little of this could be shown on stage but works convincingly when
narrated.

Of the six roles, the Journalist and the Friend are the most important (the
former sung by a mezzo-soprano, the latter by a baritone) and these are
also the ones which are principally sung (though the opposite singer will
also perform spoken dialogue). The Neighbour and the Teenager are both
performed in Russian (again, with a simultaneous translation), and the
Teacher and Medic are both played as a duet. If this sounds a little
hectic, what it does is to keep the opera flowing rather as you’d expect
the events they’re describing to unfold with similar urgency.

Emily Edmonds and Johnny Herford were hugely impressive. If the opera
begins in a relatively straightforward way, requiring both singers to just
paint the scene for us, it rarely remains this easy for them. Sometimes the
sudden changes between one role and the next left the singers with little
margin for error. But it was the ability to switch between multiple roles
and make them sound distinctive which required a more creative and deft
artistry. Perhaps it wasn’t surprising that it was Edmonds’s The Neighbour
and Herford’s The Teenager (both of which are sung in Russian) which proved
the most distinctive. Herford’s Teenager was on the edge, brittle and
innocently touching, and his singing was everything about these things – a
very vivid contrast to Edmonds’s Neighbour who was an extraordinarily
powerful figure. Perhaps this power stems from the very nature of The
Neighbour – a character who has nebulous or ambiguous feelings about Denis
and Katya, who is uncertain about the events because she only sees them
from a distance. There is even something suggestive of Britten’s Mrs Sedley
in the part – even down to both roles being sung by a mezzo, and the more
sinuous scoring. If the Journalist and The Friend are the central figures
narrating the story, and these were beautifully done by Edmonds and
Herford, it’s tempting to argue that both The Teacher and The Medic might
have been roles better absorbed elsewhere. 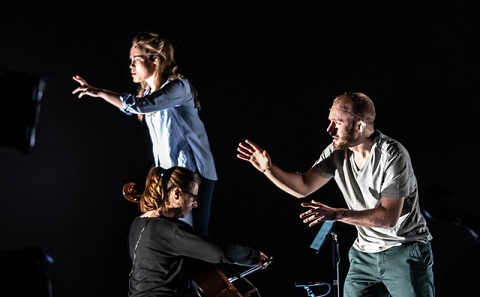 The orchestration for Denis & Katya is unusual, and even
tighter than Venables used in 4.48 Psychosis, which was limited to
twelve instruments. As with his first opera, Venables doesn’t use the
orchestra as a means to an end but as a significant part of the narrative.
The instruments blend with the voices, and the scoring is micromanaged to
reflect this. Scored for just four cellos – amplified by microphones – they
span the mezzo/baritone range well. More interestingly, and certainly the
intimacy of the Purcell Room acoustic helped, was the sheer aural weight
and potency of a quartet of them. With each cello arranged at a quarter
edge of the stage, they would play either in absolute unity or as a quartet
of soloists in their own right. The scoring is exceptionally well done, and
perhaps is no finer than in the music given to The Neighbour which is both
muscular and driven. The four cellists from the London Sinfonietta were
superb, the virtuosity limitless.

Much of Andrew Lieberman’s scenic and lighting design remains on the
minimalist side – extravagantly so for much of the opera’s seventy-minute
running time. This emptiness is almost entirely focussed on the stage
itself where only two chairs for the singers are used, the cellists
spatially placed at each corner. But this isn’t about what the audience
sees it’s about what they should imagine, not just in a staged sense but in
a psychological one. That what we do see (Pierre Martin’s highly
imaginative video design) relies entirely on the width of the Purcell
Room’s stage – that unbroken span of screen a vast computer monitor of
typed out messages, each letter accompanied by an electroacoustic click.
Only towards the end of the opera is there any real action as a train
begins to leave the Russian village of Strugi Krasnye where all of these
events have taken place. As the train gathers speed and travels one way,
the effect on the mind is to pull you the other. But this is, after all,
exactly what the opera has been about: motives, decisions, choices,
endgames and, in the end, unanswered questions.

What Venables and Huffman have given us in Denis & Katya is an
opera which defies the form. In doing so, it goes substantially further
than 4.48 Psychosis did. It is a tragedy, but its eponymous
characters never appear at all. The audience see what happens but are also
complicit voyeurs. And Venables and Huffman are no more nor less successful
than others have been in unveiling the enigma of what happened to Denis and
Katya, though this is not a major failing. If perhaps not as harrowing as
their first opera, it is a haunting and powerful work and, in a performance
as artistically compelling as this one, leaves a lasting impression.