Sir Andrew Davis conducts the Lyric Opera Orchestra in the gripping score and the Lyric Opera Chorus is prepared by its Chorus Master Michael Black. The central role of Gherman is sung by Brandon Jovanovich. Lisa who develops into a gradual emotional attachment for Gherman, is sung by Sondra Radvanovsky. Both artists delve into the portrayal of their characters with an intensity that demands attention from the audience. Also giving performances of urgency and commitment are Lucas Meachem as Prince Yeletzky, Elizabeth DeShong as Pauline, Jane Henschel as the Countess, Samuel Youn as Count Tomsky, and Jill Grove as their Governess. The production was directed originally by Richard Jones; the revival is directed by Benjamin Davis. Making her debut at Lyric Opera in these performances is Ms. Henschel.

The Lyric Opera Orchestra is led by Davis with sensitive shaping through the hauntingly lyrical introduction, just as the interplay of lighting and scrims draws the spectator into the lives and minds of the characters. Groups and smallish crowds alternate with individuals in the opening scene staged in a public park in St. Petersburg. The lively choral passages of nannies and their youthful charges give way with a smooth transition to the conversation of several offices now alone in the park. During the course of this scene the group of officers is variously seated on three uniformly placed benches, such feature suggesting a parallel between the depiction of public space and the fixation of the individual. At the entrance of Gherman change in the personality of the protagonist is noted by his fellow officers. In the dialogue between Count Tomsky and Gherman Mr. Youn succeeds admirably at depicting the compatriot bent on learning Gherman’s secret reserve. In the latter role Mr. Jovanovich creates an astounding figure: at first irritable and withdrawn, in response to Tomsky’s urging Gherman’s confession of his love for an unidentified, noble maiden proceeds into an opposing trajectory. In his determined yet admittedly hopeless focus on this attraction Jovanovich moves nervously from one bench to another of the three, his voice shifting convincingly from lyrical and dream-like statements to impassioned outbursts making use of head-tones to indicate excitement or despair. Once Prince Yeletzky announces his intention to marry, Gherman realizes that the object of his desire is even further from reach. Lisa and her grandmother, the Countess, appear in this public sphere, so that Gherman is now fully aware of his position. Once the story of the Countess’s youth in Paris – along with the intrigue of the secret three cards – is told, the protagonist’s obsession can here scarcely be contained. 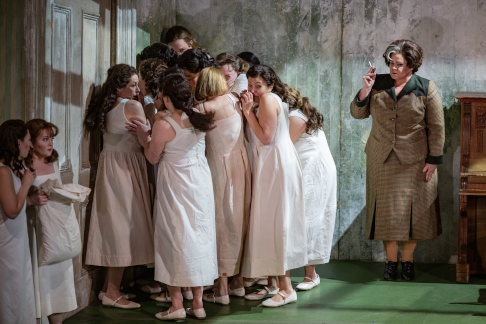 In the following scene the private interior of the noble household predominates. Lisa and her sister Pauline sing for their circle of intimates, the voices of Radvanovsky and DeShong blending in graceful arching lines. When subsequently alone in this scene, Radvanovsky’s impassioned self-examination shows a vastly contrasting approach. While she struggles to comprehend her diminished feelings for Yeletzky and an undeniable attraction to Gherman, Radvanovsky’s soaring top notes accelerate as her excitement at the thought of the officer persists. The encounter between Lisa and Gherman, who has secretly entered her room, intensifies until Jovanovich sings in terms of despair. The final moments of the act seal a union which cannot help but lead to a downward slide for the protagonists. 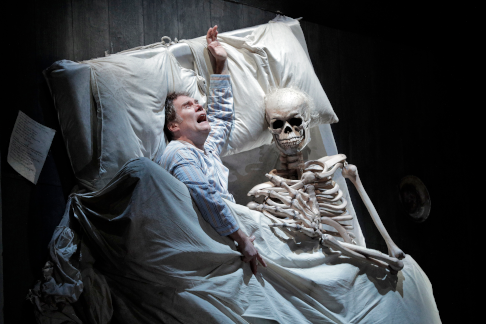 Brandon Jovanovich
In the second act social festivities at first predominate. When alone together Yeletzky attempts to plead his cause with Lisa, whose emotional distance he senses. In Yeletzky’s well-known aria Mr. Meachem sings with a lush, romantically infused line, so that his words should melt the heart of his beloved. Yet the stage-blocking indicates the futility of this lyrical reminder. At the start of the aria, the two characters stand together, by the close of Meachem’s wistful lines, they remain at opposing corners of the stage. With Lisa’s intervention Gherman is later able to gain access to the Countess’s chamber where he plans to confront her after the social event. Here Jovanovich moves as though one possessed while he remains concealed until alone with the Countess. His threats to obtain the secret of the cards are as credible as his dejection at not learning the secret when the Countess dies of fright.
The third act brings Ghernan’s obsession to an inevitable conclusion. As he reads a letter from Lisa in his barracks Jovanovich depicts his character as oddly and uncharacteristically calm. Once visited by the ghost of the Countess, Gherman’s demeanor changes. When Lisa attempts to appeal to his presumed devotion, Jovanovich ignores her in both thought and speech. Radvanovsky’s final lines before suicide are heart-rending. In the final scene in the gambling parlor Gherman realizes, of course, that he has been tricked by the spirit of the Countess. His suicide on a circular platform of the gaming table recalls the position of the three benches in the opening scene. Obsession reaches its inevitable conclusion in this stunning production and cast at Lyric Opera of Chicago.
Salvatore Calomino