Of course, Bizet’≠s brightly lit score has all the atmosphere, vibrant
colours and exotica of the Spain he never visited, and the strength of its
text means it can survive even the most bizarre transpositions. This
production certainly brings a new approach and rather than just project
Carmen as a sexual predator, she’s cast as a working-class girl, one whose
poverty brings her close to an underclass of uneducated, virtually lawless
drug pedlars and gunrunners.

It’s this sense of deprivation and unruliness that influences both Davies
and designer Leslie Travers whose set comprises a three-tiered curve of
slummy apartments facing an unfinished courtyard with surrounding steel
fencing. Grim as it is, the whole bears kinship with a favela, cleverly
conveying a barracks (with family accommodation – even a brothel),
cigarette factory or more probably a drug-smuggling plant, Lillas Pastia’s
mountain tavern and a suggestion of a bullring. Much of the success of this
is achieved through Gabriel Dalton’s costumes and Oliver Fenwick’s subtle
lighting. 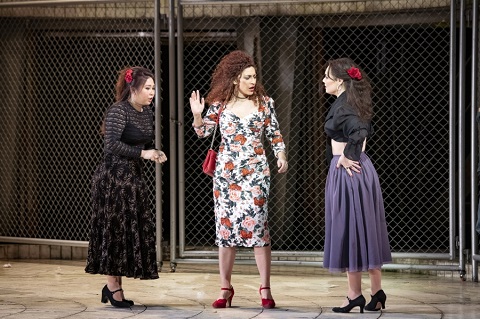 So far so good in its transposition from 19th-century Seville to
a contemporary, non-specific location in Brazil. And so far, so good too,
in its limited way, to focus on Carmen as a product of her environment. But
Bizet’s masterpiece not only illuminates those at the bottom of the heap
and the tensions between free will and restriction (consider all the steel
fences), but charts the destructive power of obsession, the psychological
plunge of Don JosÈ from decent lad to addictive, jealous and
ultimately rejected lover.

Directorial novelty for one of the most performed operas in the repertoire
is welcome, in fact it’s virtually a necessity. But so is a mezzo who can
offer an essential mix of physical allure and danger. Despite striking
looks and a vivid stage presence, Julia Mintzer never quite raised the
emotional temperature; her devil-may-care wantonness was lukewarm and her
somewhat plummy ‘Habanera’ made little impact. She possesses an attractive
voice, but gypsy grit and growl is largely absent, and when the temptress
in her finally emerges in the ‘Seguidilla’ her vocal projection is limited.
It was not until we reached Act Two’s tavern duet, ‘Je vais danser’, that a
light and flexible voice charmed the ear. 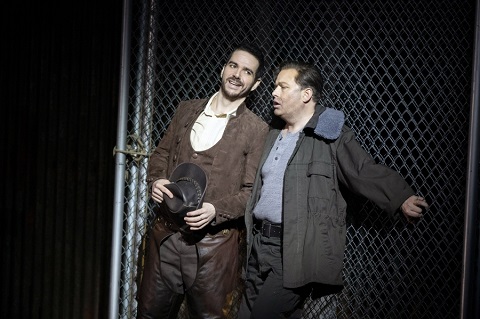 A well-cast Giorgio Caoduro as Escamillo brought smouldering looks and
plenty of swagger. His rich, gnarly baritone – pushing a little too hard in
the second act showpiece – found more even tone in his confrontational duet
with Don JosÈ, sung with impressive ease by the lyric tenor Peter Auty. His
was a portrayal of gathering intensity, delivering an impassioned ‘Flower
Song’, and by Act Four his implicit doom was a mixture of rage and
hopelessness. Chemistry between Auty and Elin Pritchard as the jilted
MicaÎla made clear shortcomings elsewhere. Her wide-eyed innocence was
matched by a voice of homespun simplicity; operatic heft traded for sweetly
calibrated lyricism. 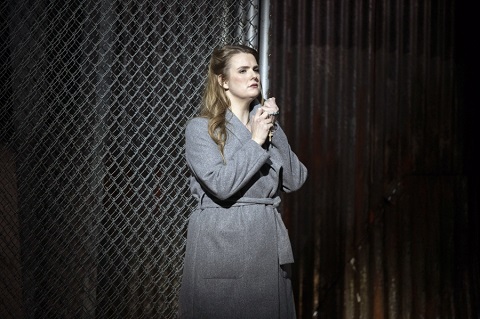 Prominent among the remaining cast are the bright, complementary voices of
Hagen Lee and Angela Simkin as Frasquita and MercÈdËs faring well in the
fortune-telling sequence, while John Savournin and Ross Ramgobin make their
mark early on as Zuniga and MoralËs. There’s robust singing from the Chorus
and notably from some superbly trained school children whose jewel-like
voices and conspicuous enthusiasm leaves a vivid impression. In the pit
Harry Ogg drove through the score with a zeal that generated some
startlingly fast tempos – a steeple chase of an overture and a rushed Act 3
prelude will hopefully gain some poise in time – but the orchestra
responded with suitably clean, zesty playing. If you don’t mind the
distracting dance episodes and the sludgy colours, this Carmen is worth
seeing and in time its personal dramas will burn more fiercely.