Beyond the carefully designed programme of enhanced opera skills training
and continuing professional development, Mascarade Opera Studio Artists
will become part of the international New Generation Festival network, with
its connections and career opportunities. Held in the historic Palazzo
Corsini al Prato in Florence, places on the programme for singers and
re?pe?titeurs are fully funded.

Complementing their studio training, participants will take part in a
number of public events including orchestral showcases in Florence and
Berlin, performances at Milan’s Villa Medici Giulini, as well as regular
recitals and opera galas in the Tuscan capital and in Andermatt,
Switzerland.

Auditions took place in New York, London, Berlin, Florence and Glasgow in
November and December 2019, welcoming applicants from all over the world.
The ten emerging professionals in the first cohort are all 30 years or
under in age and come from nine countries around the world. 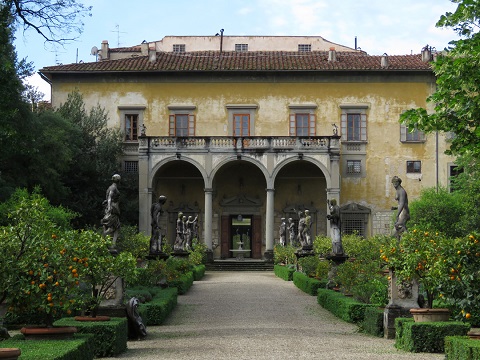 They have been successful in a number of prestigious competitions including
the International Hans Gabor Belvedere Singing Competition, the
Metropolitan Opera National Council Auditions, the Mildred Miller
International Voice Competition and the Clonter Opera Prize. Faik
Mansuro?lu appeared in the New Generation Festival’s 2019 production of Le nozze di Figaro as Count Almaviva.

“Over the last three years we have done our homework and developed a
training programme based on characteristics of elite performers in the
world of music, sports and business. We have selected a group of exciting
performers that we are confident will thrive in the operatic world.”

Dr Ralph Strehle is interviewed in the April issue of

Mascarade Opera Studio has been developed by the New Generation Festival,
co-founded by Maximilian Fane, Roger Granville and Frankie Parham, and
follows the successful NGF Summer School which provides the chorus for the
NGF main stage productions.

“Florence – the birth place of opera – is the ideal place for a Renaissance
in opera training. The aim of our programme is not just to prepare young
and exceptionally talented opera singers and re?pe?titeurs for major
careers in opera. We want to re- evaluate opera training and the function
of opera in society.”

Studio Director Dr Ralph Strehle, performance coach at the National Opera
Studio and former Associate Head of Vocal Performance at the Royal
Conservatoire of Scotland, has put performance psychology at the heart of
the studio’s programme. Renowned accompanist and vocal coach Julia Lynch
will oversee the studio’s coaching provision as Head of Coaching. The team
will be supported by Francis Parham, NGF’s Executive Producer, as CFO of
the Mascarade Opera Studio.

Over half of the members of the artistic advisory board are women:
Mascarade Opera Studio feels strongly that women are under-represented in
key roles in the opera and music industry.

The opening five-year budget from September stands at ?2,100,000, with
?35,000 per year to be directly invested annually into each participant.
That is a total of ?1,750,000 invested into 50 artists over five years,
representing a programme-focused efficiency rate of 83%.

After a triumphant third year, co-founders Maximilian Fane, Roger Granville
and Frankie Parham, have collaborated with a diverse and young team for
2020’s Festival, gathering some of the world’s most exciting performers and
rising stars. An annual event that breaks down barriers between
generations, this is a Festival by a new generation of artists to inspire a
new generation of audiences. Throughout the weekend, audiences will take to
the Corsini Gardens in the heart of Florence for open-air musical and
dramatic performances.

Growing significantly since its inaugural year in 2017, the Festival now
sells over 2,000 tickets to a diverse and international audience that
represented over 25 countries. Over the past three years, the Festival has
worked with over 400 young artists, creatives and technicians in fields
including stage management, costume and stage design, company management
and stage direction.

The New Generation Festival prides itself on being an annual event that
breaks down barriers between generations, and 2019 did just that: the ages
of the Festival’s audience ranged from 8 to 91 and over 50% of the audience
for the opera performance was under 35. Inspired by the achievements of the
Italian Renaissance, the NGF celebrates creativity and stimulates it
through the connection of art forms, cultures and generations.

In 2019, the New Generation Festival expanded internationally, and now
presents the finest talents in opera, music, theatre and the visual arts in
a programme that runs throughout the year across spectacular locations,
ranging from the Swiss mountains of Andermatt to its flagship summer
festival in Florence. Hosting three festivals and a young artist recital
series over Andermatt Concert Hall’s first season, the New Generation
Festival team have presented artists including Daniel Barenboim and
orchestras such as the Berliner Philharmoniker and the Chamber Orchestra of
Europe.

The New Generation Festival team now collaborate at the highest level with
competitions and organisations across the world, including: the Concours
musical international de MontrÈal (CMIM), The Solti Accademia, The Royal
Academy of Music, and the Concorso Lirico Internazionale di Portofino
(CLIP).

In collaboration with Mascarade Opera Studio, the New Generation Festival
hosts a Summer School for talented singers from conservatoires across
Europe to study with leading professional teachers and coaches. As well as
daily in-depth individual coaching sessions, voice lessons, performance
classes, performance psychology workshops, a public masterclass and a
lunchtime concert, participants in the Summer School form the chorus for
the NGF main stage productions.