The ensemble does perform in London, but it has also generated quite a
presence for itself outside the metropolis, with regular concerts in York
and in Cambridge, as well as performing at National Trust properties in
programmes which reflect the musical history of each property. The group’s
2015 disc of the music of 18th-century composer Thomas Tudway
was recorded at National Trust’s Wimpole Hall where Tudway worked from 1714
to 1726.

Since Lockdown, the group has been active online, giving a regular series
of coffee concerts of solo repertoire on Zoom. But, as Chris Parsons
explained when we chatted recently over Zoom, the group has been ‘chomping
at the bit’ to do something larger scale. They had a live concert planned
for July 2020, so as this was cancelled the group decided to do something
similar, online. Thus, Eboracum Baroque’s Heroic Handel concert
was born, to be streamed on YouTube and Facebook on Saturday 18 th July 2020 at 7pm.

As well as giving the musicians a chance to perform, the concert represents
an opportunity to provide them with some welcome financial support, as well
as keeping the audience engaged. Chris points out that it is important not
to forget that people are waiting to come to concerts. The group’s virtual
coffee concerts, which happen every couple of weeks, have enabled the
musicians to maintain links with regular supporters in the UK but also to
develop an audience from all over the world. The virtual concerts arose
partly out of an idea that they had had already: to do concerts which
placed individual Baroque instruments in the spotlight. And, this has
happened, albeit in online rather than live. Chris admits that there is a
personal element, too, in the move to larger-scale repertoire; his own
instrument is the trumpet and there is not too much Baroque repertoire for
just trumpet and continuo.

The logistics of presenting larger-scale repertoire online have been
significant, and it has been a real learning curve. Thankfully one of
Chris’ friends is something of a tech whizz, but it has required Chris to
mark up the music in a detailed fashion, something he would not normally
need to do, so that they could create click tracks with all the tempo
variations. And then there was getting used to the strangeness of playing
along to just a click track. In fact, they recorded the cello and
harpsichord continuo first, layering everyone else over the top. But it has
given Chris and the other musicians in the group a big project to be
working on, particularly as the planned concert will have about 60 minutes
of music.

The repertoire for the concert, all by Handel, celebrates all the different
aspects to Eboracum Baroque’s performances, with the coronation anthemZadok the Priest, arias from Rinaldo and Giulio Cesare, a chorus from Acis and Galatea, a trio
sonata and a recorder sonata, all starting with a March from Rinaldo. Chris describes it as a real mixed bag, and there is
deliberately something for everyone.

The group is hoping to create, as closely as is possible, a concert
ambience, even suggesting that audience members dress up for the occasion,
and there will be an interval during which York Gin will talk about the
history of gin, and be making a virtual cocktail!

The group is also working on further virtual concerts to make up for the
continuing enforced live silence. Their next recording project was going to
be the recorder version of Vivaldi’s The Four Seasons, something
that Chris describes as mind-boggling. This has been delayed, and they hope
it might kick off later this year or early next year.

They are also thinking about Christmas 2020. For a small group, Christmas
is an important part of the calendar; performances such as Messiah
in Cambridge with an audience of around 600 people effectively make the
group’s other work possible. Without such large-scale performances, they
are looking at other ideas, such as streaming. 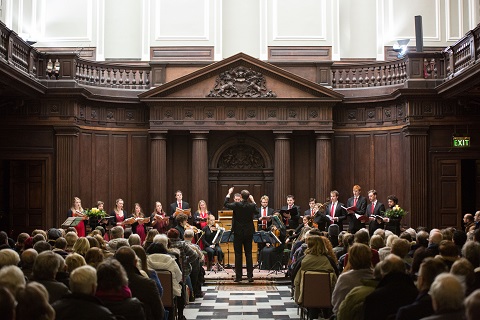 Other projects which have been hit by lockdown included the ensemble’s
education work. In May 2020, they were due to be doing a schools’ projects
on Vivaldi’s Four Seasons at the National Centre for Early Music
in York. Instead, they are looking videos and online sessions to replace
these, and hope to be releasing something in the autumn.

Eboracum Baroque in fact began as a choir, and it then morphed into a mixed
group which performs everything from chamber music, orchestral music and
opera. It is very much a group of friends, most now in their mid- to
late-20s. Chris sees the group as providing a musical platform for young
musicians, performing great repertoire and valuable income for young
freelance musicians. Now that that musicians are slightly, older many are
also working in some of the major early music ensembles.

Around five or six years ago, the group was doing a free concert at the
Fitzwilliam Museum in Cambridge when Chris was approached by someone from
the National Trust. They were interested in the composer Thomas Tudway
(before 1650-1726), who had worked at the National Trust’s Cambridgeshire
property Wimpole Hall. Chris did some research and found that there seemed
to be a great deal to Tudway. The upshot was a disc of Tudway’s music,
recorded in the chapel at Wimpole Hall and funded by the National Trust and
Arts Council England. 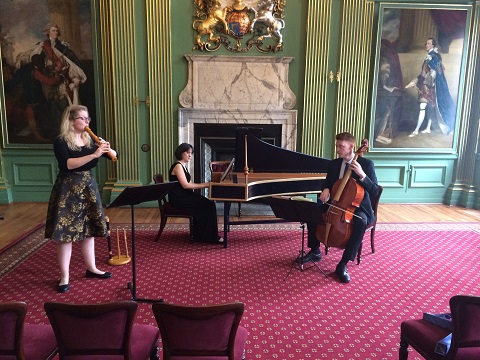 Chris would like to be able to return to Tudway as he feels that a lot of
Tudway’s music is good; there is a piece for full orchestra which Tudway
wrote for his graduation at Cambridge and which intrigues. Chris finds
Tudway an amazing and interesting person but thinks that perhaps he was too
outspoken for his own good; Tudway was organist at King’s College,
Cambridge for over 50 years but never managed to get a post in London.

One of the things that Chris enjoys doing with Eboracum Baroque is finding
composers who need a platform. Another instance of this is the mid-18th
century Suffolk composer, Joseph Gibbs (1699-1788) who was as celebrated as
Handel in his native Ipswich. A lot of Gibbs’ music does not survive, and
we only have his violin sonatas, but Eboracum Baroque has recorded some of
them on a disc entitled Sounds of Suffolk, alongside music by
Giovanni Bononcini (1670-1747), Gottfried Finger (1655-1730) and Charles
Dieupart (1667-1740), all composers with links to Suffolk. Bononcini has
links with Ickworth House where he worked for the Hervey family, while
Charles Dieupart taught the Hervey children.

Another regional music making project involves looking at large-scale odes
for St Cecilia’s Day with Bryan White of Leeds University (who has written
a book about music for St Cecilia across the British Isles in the 17th and
18th centuries), with music by George Holmes (1680-1720), organist of
Lincoln Cathedral and Vaughan Richardson (died 1729), organist of
Winchester Cathedral, again lesser known names which deserve more of a
platform. They have already performed some of this repertoire with Bryan
White conducting the Leeds University Chamber Choir, and there are plans in
the works for a CD.

Eboracum Baroque has only been part of Chris’ life; as well as freelancing
on the trumpet (mainly Baroque), he also spends two days a week teaching,
and he is lucky that this has continued via Zoom. He lives just outside
Ely, and this has led him to develop local connections. He conducts two
amateur orchestras and a choir in the area, and really enjoys working with
them. Continuing rehearsing under lockdown has involved Chris in conducting
rehearsals online and making virtual recordings; he describes this as an
eye-opening process.

He has found that rehearsing via Zoom is good for talking about details,
marking up the music and making sure that performers understand, and the
orchestras have worked a lot to backing tracks. An important part of this
process is that it ensures that individual players and singers are not left
alone, they have something to perform along with. And the last half-hour of
each session has a different member each week presenting their own version
of Desert Island Discs. Whilst the process has been limiting in some ways,
Chris sees it as opening up new doors, but it will be amazing when they can
meet up again.

‘O The Pleasure of the Plains’ from Acis and Galatea, HWV49