Co-curated and introduced by Music Director, Antonio Pappano, seated at the
Steinway positioned front-of-stage, it was the first of three such live
streams from the House and the first live performance at Covent Garden
since the curtain went down and the doors were closed on 17th
March.

At least the performers, facing upstage, were spared the emptiness that
confronted the viewers: a twilight auditorium of gently glowing crimson and
gilt, the two thousand-plus empty seats a reminder, if any were needed, of
the prevailing sense of loss that shadows the entire world at this present
time.

If the audience at home were anticipating an uplifting medley of their
opera favourites, then they would have been disappointed, at least until
the final minutes of this seventy-minute broadcast. Instead, Pappano has
devised a programme which might have been titled ‘A Celebration of British
Twentieth-Century Song’. It was an ingenuous sequence which opened with a
heralding fanfare and ranged through celebration and sombreness, dramatic
immediacy and wistful reflection, extrovert humour and intimate longing.
The sung items framed a sinuous, tactile dance newly choreographed by Wayne
McGregor, since 2006 the Resident Choreographer at the House, to Richard
Strauss’s ‘Morgen’, the composer’s wedding present to his lifelong
companion and muse, Pauline de Ahna.

A Handelian flourish of confidence got things underway, Pappano’s
crystalline arpeggios rippling down the keyboard with glittering panache at
the start of Britten’s ‘Let the Florid Music Praise’, the opening song of
his 1937 cycle On This Island, setting five poems by W.H. Auden.
The first performance of the work took place at London’s Broadcasting
House, sung by Sophie Weiss with Britten himself at the piano. Here,
Pappano was joined by Louise Alder whose last live performance was probably
on a stage the other side of the West End, as Susanna in ENO’s new
production of The Marriage of Figaro, which was forced to closed
its doors after the opening night.

Alder’s soprano gleamed, rising rejoicingly through the ascending fanfares,
as she and Pappano pushed forward with optimism, the pinpoint-accurate
bravura hastening towards the climatic “Shine on!”, before the piano’s
beautifully tailored transition led into the more muted strains of the
Purcellian minor-key reflections on loss and death. Britten’s chromatic
vocal curls are as complex as Auden’s elusive imagery, both melodic line
and text presenting real challenges to the singer, but Alder beautifully
captured the veiled intimation and privacy, Pappano’s accompaniment ever
discreet. Her vocal agility was impressive in ‘Now the leaves are falling
fast’, though perhaps the tempo was a little too impetuous as the text was
somewhat lost amid the racing vocal undulations.

The surfeit of detail in ‘Seascape’ was brilliantly negotiated by Pappano,
as Alder combined vocal sweetness with flexibility and perceptive textual
interpretation. The highlight was the ‘Nocturne’, its very simplicity
ensuring its intensity. Alder’s phrasing and breath control – wonderfully
sustained diminuendos and finely crafted phrase-endings, so often neglected
– were consummate. After the rapture, a perky conclusion, ‘As it is,
plenty’ reminding us of the jazzy spirit of Britten’s ‘Cabaret Songs’. 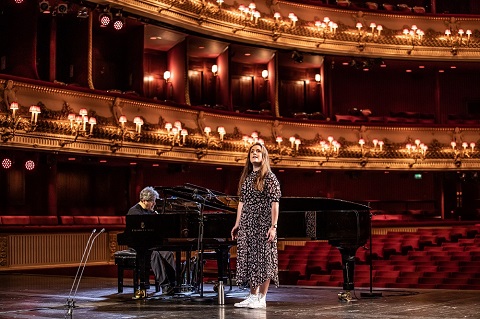 Butterworth’s A Shropshire Lad seems to be proving a favourite
among tenors and baritones during these troubling months, and here it was
tenor Toby Spence who followed Alder onto the ROH stage, to sing of loss
and longing, but also of regeneration and hope. ‘Loveliest of trees’ was
delicate and restrained, both Pappano and Spence lingering for the tiniest
of moments at the start of their first phrases, then moving forward with
eloquence and composure, Spence enunciating the text with scrupulous care,
Pappano subtly pointing the harmonic nuances which are more complex than
the folk-like clarity of the vocal line sometimes leads us to assume. The
poet’s longing for a simpler time was incredibly moving. Spence was a
resonant ‘wise man’ in ‘When I was one-and-twenty’ and the subtle fading
into the final doleful acknowledgement that the heart is never given in
vain, but “sold for endless rue”, was brilliantly done.

‘Look not in my eyes’ had a lovely narrative fluency, the 5/4 tempo rolling
easily onwards, Spence’s middle register warm and even. The same unmannered
gentleness infused ‘The lads in their hundreds’: sad but pragmatic, the
tempo relaxed and the mood never sentimental, this was a masterclass in
‘less is more’. Spence closed his eyes to inhabit the distant, departed
speaker in ‘Is my team ploughing’, the soft questions rudely disrupted by a
voice ardent and strong, but offering re-assurance – “be still … lie down
and sleep” – then dismissing the troubling past, “I cheer a dead man’s
sweetheart, never ask me whose”. The piano seemed almost to plunge into the
grave at the close.

McGregor’s deeply sensitive and intimate interpretation of Strauss’s
‘Morgen!’ followed, danced by two of the Royal Ballet’s Principals,
Francesca Hayward and Cesar Corrales. A ‘real-life’ couple, Hayward and
Corrales entwined with breath-taking tenderness and intensity, Corrales
curving, arching, bending with astonishing smoothness, like an inky line
trailing through water, Hayward as graceful as soft silk blowing in the
breeze. McGregor emphasised the electricity of human touch and the human
body’s engagement with space and air. As Alder and the violinist Vasko
Vassilev, the Concert Master of the Orchestra of the Royal Opera House,
caressed Strauss’s floating images of the ‘sun-breathing earth’, ‘beach,
wide, wave-blue’, the dancers slowly sank into ‘the mute silence of
happiness’. 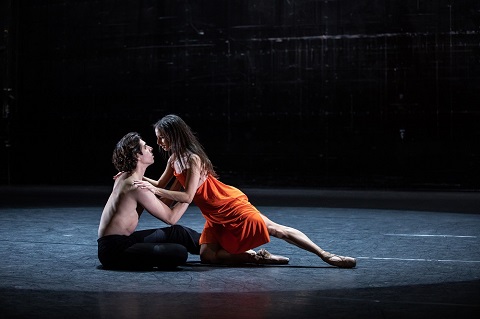 Next it was the turn of Gerald Finley, who began with Mark Anthony
Turnage’s Three Songs (2000), written especially for the
Canadian baritone, who created the role of Harry Heagan in Turnage’s opera The Silver Tassie. During rehearsals for that first production
Finley asked Turnage if he would contribute something new to a recital
programme that he was building around Ravel’s Histoires Naturelles
, lively musical portraits of the animal kingdom. Turnage obliged, and the
result was this set of three songs, two about cats (setting Stevie Smith’s
‘The Singing Cat’ and Thomas Hardy’s ‘Mourning’) which are followed by Walt
Whitman’s ‘Last Words’ from Leaves of Grass in which the poet
dreams of a life lived with and amid animals.

Turnage’s word-setting is Brittenesque, and both the verbal rhythm and the
relationship between voice and piano reflects what Britten learned from
Purcell. If the songs seem rather erudite and distanced, then Finley’s
clarity of diction and vocal focus drew the listener in. Hardy’s sober
reflections were particularly telling, as Finley stretched through the
poetic lines, and revelled in the dark colours, “Till your way you chose to
wend/ Yonder, to your tragic end”. His easeful crossing of wide vocal
registers ensured an integration of feeling and means of communication.
And, he gave us a warming, somewhat wry, smile at the close of the Whitman
setting, “I think I could turn and live with animals”.

Finley demonstrated the extraordinary range of moods, emotions, colours
that he can encompass in his final two solo items. Britten’s ‘The
Crocodile’ (1941) ratchets up its tweeness via a series of clichÈd rising
modulations which here suggested that Finley could have made a fine living
in the nineteenth century from musical reviews and seaside shows – though
never once was the elegance of the textual delivery and vocal
mellifluousness marred. The dirge from Act 4 of Shakespeare’s Cymbeline, ‘Fear no more the heat o’ th’ sun’, is more sombre and
complex, and the setting by Gerald Finzi (whether it is to be sung or
spoken in its theatrical context is a matter of ongoing debate) seems
somehow to speak to the ‘English’ spirit: is it the hymn-like quality of
the modal harmony, the folk resonances, the walking bass, spiritually
redolent plagal cadences, the very measured way in which deep emotions are
communicated? Who knows, but Finley ensured we appreciated Finzi’s
wonderful word-setting, through the innate logic of his phrasing within the
largely strophic structure. I have long been of the view that, yes, Finzi
does always sound ‘like Finzi’, but that anything by Finzi is worth hearing
– and Finley confirmed this here. 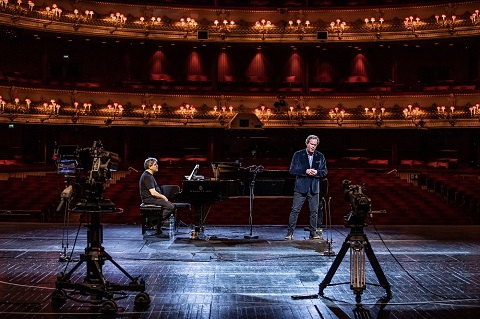 And so, we swept on to the opera. First, a dazzling ‘Tornami a vagheggiar’
from Louise Alder who made Morgana (Alcina) seem surprisingly
human in her desires and compulsions, despite being infatuated by one who
is not what he seems. The B section of the da capo offered a beautiful
contrast of legato phrasing and deep sentiment, in opposition with the
coquettishness wizardry of the opening, in which the ornaments were
brilliantly (in every sense of the word) executed.

To close, Bizet: the final duet for Nadir and Zurga, ‘Au fond du temple
saint’, from Les PÍcheurs de perles was a flowering of operatic
melodising. Pappano conjured every symphonic colour that could be wrought
from the Steinway and the voices of Spence and Finley blended beautifully.
Okay, one had to imagine much – the theatrical context, the orchestral
plushness, the emotional heightening, fullness and richness – but the
shared vision of beauty and grace hit the heart hard.

And, so, what of the wider picture? Well, it was left to Wayne McGregor to
note the crippling and threatening challenges faced by arts institutions of
all kinds and sizes across the UK, and especially the plight of tens of
thousands of freelancers who are not eligible for government support. And,
in support of the Black Lives Matter movement, all involved took the knee
after McGregor’s new pas de deux.

But, the darkened auditorium that cast its shadow over the broadcast spoke
louder than words and actions of this kind. Performers need to perform, and
they need to perform to audiences: digital audiences are some recompense,
but they are no substitute for the sort of inter-personal and inter-musical
relationships that develop during a live performance.

This was the first of three live concerts from the Royal Opera House: it
was free-to-view and is available via the ROH’s YouTube, Facebook and Vimeo
channels until 27th June.
There will be two further concerts on 20th and 27th
June, available at a cost of £4.99.

The programme on 20th June will comprise

a performance of Albert Schonberg’s reduction of Gustav Mahler’s Das Lied von der Erde with tenor David Butt Philip, mezzo-soprano
Sarah Connolly, and soloists of the Orchestra of the Royal Opera House and
a performance of the ‘Dance of the Blessed Spirits’ from Gluck’s Orfeo ed Euridice, featuring principal dancer Vadim Muntagirov.

Image=http://www.operatoday.com/ROH%20live%20broadcast.jpg
image_description=
product=yes
product_title=From Our House to Your House: live from the Royal Opera House
product_by=A review by Claire Seymour
product_id=Above: Antonio Pappano on the stage of the Royal Opera House