With such good fortune ‘on hold’ for the time being, my musical appetite is
being kept satisfied and refreshed by both some exciting streamed
performances and the wealth of terrific recordings which each
day ping into my email in-box or arrive with an enticing thump on the
door-mat.

The latest such arrival is Flax and Fire, the debut recital album
of tenor Stuart Jackson, on the Orchid label. I was impressed when I first
heard Jackson in 2015 – a couple of years after he’d completed his training
at the Royal College of Music – when he took the role of the Parthian king,
Osroa, in Classical Opera’s production of

J.C. Bach’s Adriano in Siria. The company had just launched its MOZART 250 project, and
Jackson has since been a frequent and admired presence in Classical Opera’s
performances (including Don Giovanni and the UK premiere of NiccolÚ
Jommelli’s Il Vologeso in 2016) and recordings (including Mozart’s

Il sogno di Scipione in 2017). The silken-voiced tenor has been making an increasing impact on
larger stages too: as Iro in the

ROH’s Il ritorno d’Ulisse at the Roundhouse, in Handel at

Glyndebourne and on tour with the company, in

ENO’s 2018 Salome, and at Garsington where he took the role of Vaöek in last year’s superb

In the songs presented on Flax and Fire, Jackson is accompanied by
pianist Jocelyn Freeman, who is also founder-director and curator of

SongEasel
, a new initiative established to provide a platform for song in South East
London. The focus of the songs is, says Freeman, ‘devotion and passion’,
and the repertoire chosen reflects the ‘numerous undercurrents and layers’
within immense affection. 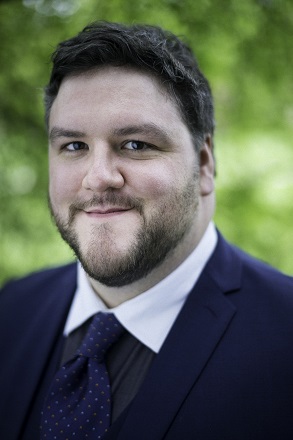 Songs by Wolf, Liszt and Schumann form the central core of the disc, and
the poets set – Mˆrike, R¸ckert, Kerner, Halm, Eichendorff – form a
mini-compendium of German Romantic poetry. The Wolf sequence begins with
the first of three songs from the composer’s Mˆrike-Lieder.
‘Peregrina I’ allows Jackson to display his wonderfully legato phrasing,
gentle tone and precise diction, but it is Freeman who perhaps shows the
stronger appreciation of accumulating rhythmic and harmonic tension, ebbing
away with pathos and vulnerability in the piano postlude. That said, the
tenor’s climactic appeal – “Willst, ich soll kecklich mich und dich
entz¸nden” (Wish me boldly to consume us both in fire” – is arrestingly
charged with presentiments of sex and death, both impassioned and dark. A
calm descends, initially at least, with the protagonist’s tentative hopes
of fulfilment, in ‘An die Geliebte’: floating through the extended phrases
Jackson captures the fragility of the dream, but then, with the sonnet’s volta, his spirits and melodic flight fall, unrest and distress
conveyed by the piano’s disturbing rumblings. Freeman draws wonderful aural
images, first of the beloved’s gentle, angelic breathing, then of the stars
which sing their song of light.

‘Verschwiegene Liebe’ is the third of Wolf’s Eichendorff-Lieder.
Freeman’s delicate whisper summons the tenor’s aspiring dreams, and Jackson
rises bravely and beautifully to the whispered peak, “Die Nacht ist
verschwiegen,/ Gedanken sind frei.” (The night is silent, thoughts are
free.) The repeat of this phrase at the close of the second stanza is
wonderfully intimate: paradoxically ecstatic and serene. Returning to
Mˆrike, ‘Nimmersatte Liebe’ closes the group. In the song’s outer sections,
Jackson and Freeman establish a lovely momentum as the vocal phrases expand
and withdraw naturally. Jackson fluently integrates quite extreme and
sudden dynamic changes and injections of intensity within a prevailing
idiom which balances urgency and pleasure, as the protagonist delights in
insatiable love. The syncopated antagonisms of the central episode feel,
however, somewhat too antagonistic: the complex rhythms and fluctuating
pulse should indeed feel discomforting, but absolute ensemble precision is
required for the insistent gnawing ‘tug’ of the dialectic to achieve its
full effect.

Wolf’s confidential miniatures are followed by Liszt’s dramatic, operatic
and expansive, Tre sonetti di Petrarca, composed after a sojourn
in Italy during 1838-39 when the composer and Marie D’Agoult read Dante and
Petrarch together. The latter poet’s glimpse of a woman named Laura, in the
church of Sainte-Claire d’Avignon on Good Friday in 1327 initiated a poetic
quest of 366 rime sparse in search of the elusive beloved of his
vision. Liszt’s ‘Pace non trovo’ surely encompasses every emotion
experienced on that journey, and Jackson and Freeman make us feel each and
every of the poet’s oxymoronic extremes. Jackson seems to find the Italian
language a more natural fit, and he relishes the operatic scope and
unceasing changefulness of the song, climbing to sustained summits – what a
resounding, sure Db! – with compelling conviction and panache. Freeman is
unwaveringly eloquent in her interpretation of the piano’s turbulent dramas
and songful reflections.

‘Benedetto sia ’l giorno’ is aptly fervent, rippling with a barely
suppressed intensity which is released by the piano’s quivering harmonic
progressions, prompting powerful vocal blossoming. Jackson’s truly tenor
rings with ardour, and his control of the stratospheric climaxes and their
descent is impressive. Only one tiny breath, for the final ‘-te’ of
‘Benedette’, when the protagonist blesses the many voices that have echoed
when he has called Laura’s name, mars an otherwise pristine delivery – and
that can be forgiven, such is Jackson’s commitment to the preceding
full-blooded, open-hearted crescendo. The duo capture the
visionary otherworldliness of ‘I’ vidi in terra angelici costumi’;
Freeman’s shaping of the astonishing harmonic ‘swivel’ before the
invocatory appeal, “Amor! Sennol valor, pietate, e doglia” (Love! wisdom!
valour, pity and grief), is brilliantly judged, and Jackson sustains the
reverential mystery of the song most affectingly.

The Schumann selection begins with one of the composer’s later songs, ‘Mein
schˆner Stern!’, a setting of a poem from R¸ckert’s Liebesfr¸hling
which was included in Schumann’s Minnespiel Op.101 of 1849.
Jackson delivers a masterclass in how to evoke consoling joy and controlled
rapture, supported by Freeman’s sensitive complementing of the vocal line
and tender bed of repeating quavers. Schumann indicates that the rhapsodic
conflict between the ecstasy and pain of love expressed by the poet speaker
in ‘Widmung’, the opening song of Myrthen Op.25 (1840) is to be
sung ‘innig lebhaft’ – intimate and lively. Jackson sings with
exemplary phrasing and beautiful tone, though he struggles a little when
the melody dips low, but the tempo here feels to me far too pedestrian to
capture the pleasures and animation inspired by this essential Romantic
contradiction.

‘Stirb’, Lieb’ und Freud’ (from Zwˆlf Gedichte von Justinus Kerner
Op.35 (1840)) also feels a little too measured, the piano’s steady
crotchets a rather deliberate step rather than a fluid stream. One result
is that there is little room for relaxation and diminishment in the closing
three trimeter lines of each stanza, such as might represent the change in
the poetic form and the crystallisation of the poetic sentiment – an image,
a plea, a lamentation. Instead – and although the sole dynamic marking that
Schumann employs throughout the song is piano, with some delicate,
nuanced ebbs and flows – Jackson chooses these stanza-closing epiphanies as
the moment to inject some heft and incisiveness, particularly when the
titular phrase, “Stirb’, Leib’ und Freund!”, allows for some plosive
vigour. The final lines receive the same forceful treatment, though the image is
a fragile one – a heart, unnoticed, unrequited, breaks: “Mein Herz
zerbricht,/ Stirb’, Leib’ und Licht!” Geistern‰he (from Lieder und Ges‰nge Op.77 No.3 (1850) is a more satisfying
evocation of Friedrich Halm’s heartfelt adoration, as Jackson easefully
conveys the blooming from affectionate intimacies to gratifying happiness
and comfort, in barely two minutes.

The Romantic lieder are framed by English song. Jackson is fulsome of voice
in ‘Man is for the woman made’, Britten’s realisation of Purcell’s song,
which opens the disc in spirited fashion. Freeman’s decorous piano
interjections initially seem to have a wry smile on their face but become
increasingly flamboyant and boisterous. A gift from Prince Ludwig of Hesse,
in 1959, of Goethe’s complete works – after the composer had dedicated his Sechs Hˆlderlin-Fragmente Op.61 to the Prince, on the occasion of
his fiftieth birthday in the preceding year – may have inspired Britten to
set the German poet’s ‘Um Mitternacht’, though an almost compulsive to
revisit verbal and musical images and realisations of ‘sleep’, ‘dreams’ and
‘the night’ may have also played its part. Freeman powerfully captures the
frightening infiniteness of the darkness and Jackson communicates the
reverence, mystery and metaphysical magnificence of the heavenly and
cosmological expanse, negotiating the challenging twists of the vocal line
through its murky harmonic waters with skill and control.

Britten’s first Canticle, ‘My Beloved is Mine’, gives the disc its title
and is, for me, its highlight: “For I was flax and he was flames of fire.”
The text is derived from the Song of Solomon, and Jackson delivers
both the sensitive blissfulness and full-throated declamatory exultations
with equal perspicacity and assurance. The final two stanzas, driven by
Freeman’s propulsive piano breaths, are a sincere celebration and
glorification of sexual passion, the fading repetitions of the final image
– an “everlasting sign,/ That I my best-beloved’s am; that he is mine” – an
intimation of eternal love and satisfaction.

William Denis Browne’s ‘To Gratiana dancing and singing’, which sets words
by Richard Lovelace and was composed in February 1913 for the tenor Steuart
Wilson, is a glorious ‘epilogue’ – free, spacious, relaxed and utterly
consoling in its devotion and belief.