We have hardly been bereft of opera during the pandemic’s closures of the world’s opera houses, their finest productions having been made available to us on our home screens. It goes without saying that no small screen recording, no matter how fine, can match the levels of operatic poetry achieved in live performances in real theaters.
Though a theater need not be an opera house, as both Salzburg and Pesaro have discovered.
The Salzburg Festival’s 1500 seat Felsenreitschule is the most poetic of the festival’s three venues (the other two are standard proscenium theaters — the Von Karajan designed 2200 seat Grossesfestspielhaus and the 1500 seat Haus f¸r Mozart). The Felsenreitschule (rock-riding-school) was famously a place where long ago spectators sat in galleries carved into the rock mountain, Mˆnchsberg — Salzburg’s grandiose geological centerpiece, to look down upon horse shows below. 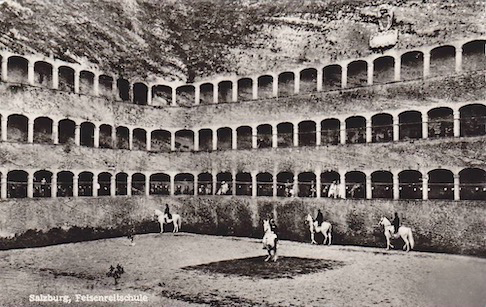 The Felsenreitschule in 1920
We now sit facing these three tiered galleries, the sheerly hewn cliff (carved into stones for the town’s cathedral) a monumental backdrop. There is no question that we are in a theater since a theater is what we see. A complex metaphor is established — theater is life, theater is art, Salzburg is theater, etc. A huge platform placed before the cliff is where the Salzburg Festival now presents its most rarified programming and its most advanced productions.
The Felsenreitschule became a part of the Salzburg Festival in 1926, its sixth year, when legendary director Max Reinhardt staged Goldoni’s commedia dell’arte Il servitore di due padroni (in German) on a small platform on the hard ground before the cliff, the audience seated on wooden bleachers facing the cliff. Over the years more comfortable seating was added for spectators, and very soon far greater scenic installations occurred, notably, they say, Max Reinhardt’s huge Faust (play) in 1933. 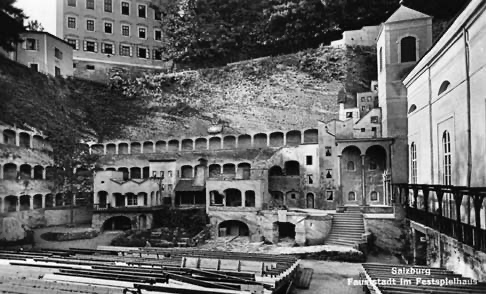 The massive set installation for Goethe’s Faust (1933)
In 1948 Gluck’s Orfeo ed Eurydice was the first opera mounted before these cliff galleries, from 1978 to 1986 Jean Pierre Ponnelle’s production of Die Zauberflˆte was trotted out each summer. In the early 1990’s the Felsenreitschule rose to a pronounced theatrical seriousness when famed Berlin stage director Peter Stein took on a series of Shakespeare plays, reinforced by a reputedly splendid Coriolanus by British director Deborah Warner.
The latest renovation of its staging area was undertaken in 2010/11. The staging space remains immense, and now its technical resources are of utmost sophistication, plus its pit holds a post-Romantic Vienna Philharmonic with ample places for small, far-away orchestral elaboration. 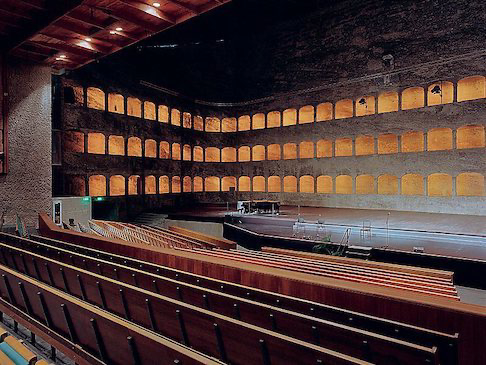 The Felsenreitschule in its current form
The Felsenreitschule’s offerings have become musically and theatrically heroic, like its repertory.
Opening on August 1 at the Felsenreitschule for six performances is Richard Strauss’ Elektra staged by Polish director Krzysztof Warlikowski. His is a huge, colorful and witty world, above all else chaotic, and in which its revealed human comedy redeems itself finally in a sort of divine beauty. This Elektra follows last year’s Salome staged by Italian director Romeo Castellucci who works in rarefied
intellectual terms rendered normally in black and white, and complex if not inscrutable metaphors — John the Baptist’s head was that of a black stallion (never to forget that this Elektra stage was a former paddock).
Here is my review of Mr. Warlikowski’s 2017 The Bassarids at Salzburg’s Felsenreitschule.
My review of Mr. Castellucci’s 2017 Salome at the Felsenreitschule.
Elektra will be sung by Lithuanian soprano Auörine Stundyte who created a dazzling, pornophonic Lady Macbeth in Shostakovich’s sordid tale of desire in Lyon, and an insatiable Renata in Prokofiev’s The Fiery Angel at the Aix Festival, another tale of sordid desire. Elektra is the inevitable climax of this unusual artist’s exploration of the repertory’s most morbid heroines.
Chrysothemis will be sung by Lithuanian soprano Asmik Grigorian who was the Castellucci Salome the past two summers in Salzburg’s former riding school. Mlle. Grigorian fully assumed the form of an adolescent Salome, and remained imperturbably motionless as a mighty cut stone slowly, very slowly descended upon her while the Vienna Philharmonic executed her famed dance.
The Warlikowski Elektra will be a part of the Salzburg Festival’s 2021 program, so you need not miss it in its full operatic glory. If you cannot get tickets next summer it surely will soon become available digitally, as is the Castellucci Salome already, and many other offerings of the Salzburg Festival from past years as well.
This summer is the Salzburg Festival’s 100th anniversary, its usual seven staged operas reduced to only two, Elektra and six performances of a last minute pandemically conceived and assembled Cosi fan tutte in the Grossesfestspielhaus opening August 2. Quite elaborated in-theater social distancing protocol will be strictly observed, the usual flamboyant fanfare and festivities of the festival’s lively theater square forsaken in this extraordinary year.
On the other hand Pesaro’s festive Piazza del Popolo is the site for two semi-staged performances (Aug 12 and 15) of Il viaggio a Reims, Rossini’s final opera in the Italian language (1825). It is the annual showpiece of the Rossini Opera Festival’s Accademia Rossiniana (young artists program) as it requires 14 solo voices. Though the academy is cancelled this year, graduates from the past two years return to show their stuff. 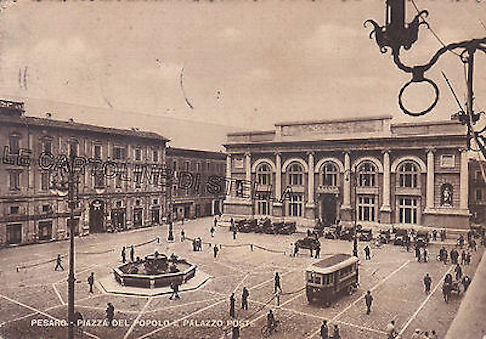 Piazzo del popolo, Pesaro, 1920
As well the 2020 Rossini Opera Festival (ROF) is offering six outdoor concert events in the piazza — recitals with orchestra by its current stars (Juan Diego Flores, Olga Peretyato, Jessica Pratt, Nicola Alaimo, Karine Deshayes, among others). Strict social distancing will be observed at all these ticketed events.
The Pesaro festival possesses the historic, 850 seat Teatro Rossini. This year the Italian style theater (horseshoe shape — see lead photo) hosts Rossini’s La cambiale di matrimonio, a one act comic farce that was the young Rossini’s first performed opera (1810)! The co-production with the Royal Opera House Muscat [the capital of Oman] is staged by Laurence Dale, an artistic consultant to Opera Africa among more important credits. The in-theater distancing protocol is interesting — two spectators in each box with all seats removed from the orchestra section (parterre, platea) where the orchestra will be placed. La cambiale di matrimonio opens the 2020 festival on August 8, ROF will stream the first of its five performances from its website rossinioperafestival.it!
Of interest is the 16 minute curtain raiser for this brief farce. It is Rossini’s cantata Giovanna d’Arco (1832) [Rossini’s last opera was composed in 1829], four concert arias for mezzo-soprano with piano but here rendered orchestrally. The artist is Marianna Pizzolato who in 2010 took on, last minute, the title role in Rossini’s biggest and best comedy, La cenerentola, in legendary stage director Luca Ronconi’s re-staging of his famed 1998 Pesaro production. La Pizzolato elevated Ronconi’s elegant staging to masterpiece status.
Ronconi’s original Cenerentola was in ROF’s Palafestival theater! The 2010 re-staging was within the 13,000 seat Adriatic Arena on the outskirts of Pesaro. 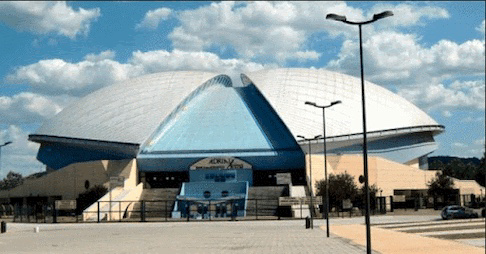 The Vitrifrigo Arena, formerly the Adriatic Arena
The ROF (Rossini Opera Festival) lost use of its 1500 seat Palafestival in 2006. This venue was an annual makeover of the Palasport (“pala” from palace), home of the basketball team Scavolini Pesaro! The team’s sponsor, Scavolini Kitchens said it was going to turn the Palasport into a fine theater for the festival. In the meantime ROF moved to the Adriatic Arena along with Scavolini Pesaro. The Scavolini basketball sponsorship ended in 2014 with the death of Mr. Scavolini, the Palafestival remained architectural drawings.
The arena is now known as the Vitrifrigo [industrial refrigeration] Arena. As of 2020 the ROF still awaits its Palafestival — though we are told it will open in 2021.
Meanwhile each summer since 2006 the ROF has simply erected a 1200 seat hall under the arena’s drafty, leaky canopy roof. Over the years the acoustics of this theater within a theater have been refined to become absolutely acceptable. The festival provides a bevy of double decker buses to transport spectators from Pesaro’s seaside hotels to the arena.
A sophisticated scenic apparatus has been erected in the arena each year that has sometimes functioned as a standard proscenium theater stage house, a seeming miracle of engineering. But often it has been an elaborate installation, like for the Ronconi Cenerentola, its real wall disappearing at the dÈnouement to reveal an infinite vista of chimneys (strewn through the unused back half of the arena).
Here is my review of Mr. Ronconi’s 2010 La cenerentola. Scroll down to find it.
Add breathtaking scenic installations (Graham Vick’s 2011 MosÈ in Egitto when Mr. Vick’s Israeli militia invaded the theater, terrifying spectators, Mr. Vick’s gargantuan 2013 Guillaume Tell, Giancarlo del Monaco’s spellbinding revolving stage for his 2007 Otello, Giorgio Barberio Corsetti’s meshes, reflective surfaces and video for his 2009 Zelmira) to conductors like Roberto Abbado and Michele Mariotti and there resulted performances that attained dizzying artistic heights.
Here is my review of Mr. Vick’s 2013 Guillaume Tell at the Adriatic Arena. Scroll down to find it.
Both the Adriatic Arena with the Felsenreitschule in Salzburg have inspired stage directors and designers to infuse daring new perspectives into the art form, and to re-discover and to recover repertory fallen into oblivion. The inevitable retiring of the Adriatic Arena as an opera theater is a staggering blow to our operatic imaginations.
Well, maybe the arena was hugely expensive to inhabit, inconvenient to get to, leaky when it rained, the chairs were uncomfortable, there was no easy handicap access, etc.
The world wide web has allowed us to personally curate our own spring/summer opera festivals. Mine included Mefistofele (2013) from San Francisco Opera, the re-mount of Robert Carsen’s racy 1998 production for Geneva Opera; Fidelio (2020) from Theater an Der Wein with a splendid stage set by American architect Frank Barkow; Verdi’s Messa da Requiem (2019) from the Zurich Opera conducted with deep operatic sensitivity by Fabio Luisi; Boris Godunov (2018) from Paris Opera, the amazing Boris of Russian bass Ildar Abdrazakov; La Boheme (2017) from Paris Opera effectively translocated into outer space; Moses and Aaron (2015) from Paris Opera in a monumental, revelatory staging by Romeo Castellucci.
Though my personal festival has been spectacular and rewarding I can’t wait to re-enter the theaters around the world to rediscover the excitement of live opera.
Michael Milenski