She turns, fixes the audience with a steely stare then whips off her coat
to reveal fishnets and PVC basque, and, as the audience chuckles, she
clicks four brisk beats and a whiplash strike brings in the orchestra
behind her, to accompany her launch into the peaking, plunging, faltering
soprano solo of Gyˆrgy Ligeti’s Mysteries of the Macabre, a
concert setting of his operatic scene (from Le grand macabre) for
an unhinged, soprano chief-of-police and orchestra. Just singing this work
is challenge enough for most, let alone conducting it at the same time.

The opening moments of Taking Risks, a double-disc
documentary/performance offering an insider’s look at Barbara Hannigan’s
first opera production as a conductor – The Rake’s Progress, in
December 2018 with the Gothenburg Symphony Orchestra – certainly justify
the DVD’s title. Directed by Maria Stodtmeier, Taking Risks is the
second documentary DVD that Accentus Music has released with Barbara
Hannigan, following the award-winning release of I’m a creative animal
in 2015. This film follows Hannigan through auditions, casting, workshops
and rehearsals, to first night.

“As a singer I probably have ten more good years left, and I’m doing more
and more conducting, and I’m making this strange, funny path as a
singer-conductor and eventually I’ll just be a conductor,” Hannigan begins.
“So, now, yeah, my first opera, and I do think, ‘What was a thinking?’ On
the other hand, I think that I got it. I can’t wait, I’m super-excited and
I’m very scared.”

The Rake’s Progress
was the first opera that Hannigan sang, at the age of 19: “It’s in my blood
– but that doesn’t mean that anyone who sang an opera years ago can conduct
it.” Never one to take a short cut when she could tackle a marathon, there
was no chance that Hannigan would select a cast of experienced
professionals all of whom had sung their roles before – which would have
meant “I don’t need to worry about them, only my own responsibilities as a
conductor” – when she could choose to work with young singers at the start
of their careers, only one of whom had performed their role before. She was
looking for “like-minded” musicians, but these were people whom Hannigan
did not know; as she says, she was “taking a huge risk”.

So, Equilibrium Young Artists was born. And one thing that is clear is that
the process of giving her younger colleagues exciting opportunities and
mentoring them as they overcame their own challenges and fears, was as
important to Hannigan as the actual performance. 350 applications, from 39
countries, were whittled down to 125 who were invited to audition live. The
auditions became mini-mentoring sessions, and she hoped that “everyone
walked away with a personal connection”.

Certainly, she was generous with her time, advice and kindness. We see her
discussing her feelings about being a female conductor: she wondered why
she kept be asking questions about this, but realised that she had to
answer the questions since they were not really about “women and
conducting”, but “women and leadership”, a social issue. She puts
candidates at ease by joking that she must have chosen the right opera
because after 300 or 400 applications she’s not yet sick of The Rake’s Progress! 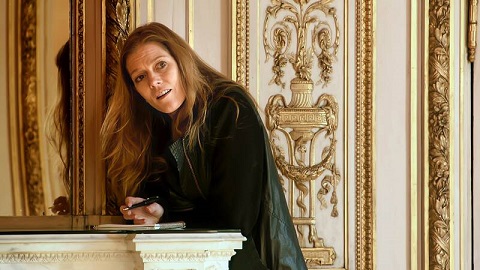 Auditions begin in the …cole Normale de Musique de Paris and, via Stockholm
and Zurich, conclude in Greenwich, London in the historic grandeur of the
Royal Naval College, now home to Trinity Laban Conservatoire. We see both a
sequence of hopeful young singers come and go, and Hannigan herself,
working on her score on an airplane, in hotel rooms, her plans disrupted by
train cancellations which leaving her sitting on the floor of a crowded
train carriage trying to study The Rake’s Progress, and arriving
tired and stressed at her destination. At the end of a casting day, she is
tearful with tiredness.

Hannigan explains that it’s not technical ‘perfection’ that she’s looking
for, it’s “something else”: how they look, move, talk to the pianist, work
in the group. Several singers have caught her eye and interest from the
start of the process including Greek soprano Aphrodite Patoulidou: she has
a certain “seriousness” and Hannigan is willing her on during her audition,
“don’t disappoint me”. She doesn’t.

We see the successful singers receiving a call from Hannigan, offering them
a role: dodgy telephone and wifi connections, incredulous responses and
absolute joy … in one case a singer’s inability to provide a correct ’phone
number prompts a rueful reflection on whether this means he shouldn’t get
the job. Fortunately for the said singer, Hannigan follows her instincts
and finds a way to contact him. It’s a good lesson to learn about
professionalism.

As she works on this project, Hannigan’s own singing career continues to
make personal, musical and practical demands. She finds herself at Dutch
National Opera singing in a production of George Benjamin’s Lessons in Love and Violence. She explains that she couldn’t
imagine herself singing beyond the age of 40, and talks honestly and openly
about the fast-paced intensity of an international singer’s life, and about
her own performance anxiety and how she has learned to manage it.

Rehearsals involve workshops with diverse professionals: Jackie Reardon, a
performance coach; conductor/composer/pianist Reinbert de Leeuw, a special
mentor for Hannigan; Natalie Dessay and Daniel Harding. It’s interesting
that something that Hannigan mentioned right at the start of the
auditioning process, when asked about her own career, is reprised by Dessay
and Harding: the loneliness that professional musicians at the top of their
profession experience.

The final rehearsals in Gothenburg with the orchestra – breaking with
convention, Hannigan requests that the singers are present and involved
from the start – are obviously tremendously exciting for all involved, and
the premiere sparkles with musical commitment, intensity and that
first-night ‘dust’ that magical moments sprinkle.

In May 2019, Hannigan toured Europe with a new bunch of Equilibrium Young
Artists but this inaugural venture must have been something very special.
The risks were worth taking.