In the year that the Proms turns 125 years old, the 2020 season brings the
spirit of the Proms to music-lovers at home. BBC Radio 3 and BBC Four
broadcasts treasures from the past 30 years of the Proms across six weeks,
before two weeks of incredible live performances at the Royal Albert Hall.

In challenging times, the BBC Proms aims to shine a beacon of hope with its
mix of seminal moments from Proms history alongside live performances from
the Royal Albert Hall. The season will bring a summer of music to celebrate
a wealth of talent, genres and styles, creating a line-up which brings
together legendary performers from the past through its unrivalled archive,
with a diverse line-up of the biggest stars of the present and future.

BBC Radio 3 kicks off this special season with the debut performance by the BBC Grand Virtual Orchestra, comprising over 350 musicians
from the BBC Orchestras and Choirs. Joining Beethoven
Unleashed – a year-long, BBC-wide marathon marking the 250th anniversary of
Beethoven’s birth, the Grand Virtual Orchestra will perform a completely
original arrangement of Beethoven’s nine symphonies, created by Iain Farrington. On Sunday 19 July the premiere of the
film accompanying the piece will air on BBC Four. Farrington describes the
work as “taking Beethoven’s music and putting it in a musical washing
machine to see which colours run”.

Following Farrington’s curtain-raiser, the First Night continues [on Radio
3] with highlights from three Proms across the past 25 years. The BBC Symphony Orchestra features both in Beethoven’s
Piano Concerto No. 3 (with soloist Igor Levit, under Edward Gardner) from 2017’s First Night, and in the world
premiere of Sir Harrison Birtwistle’s Panic which
won instant notoriety at the Last Night of the 100th-anniversary Proms
season (1995). The evening closes with celebrated Italian conductor Claudio Abbado’s final Proms performance (2007), leading
the Lucerne Festival Orchestra and mezzo-soprano Anna Larsson in Mahler’s Third Symphony.

The Opening Weekend continues on BBC Four on Sunday 19 July, when audiences
will have the opportunity to watch electrifying conductorMirga Graûinyt?-Tyla lead the City of Birmingham Symphony Orchestra in
a programme of Beethoven, Stravinsky and Gerald Barry with violinist Leila Josefowicz and tenor Allan Clayton
(2017).

Delving into the rich Proms archive

In the 125th-anniversary year of the Proms, audiences have the chance to
reflect back on some of the outstanding performances and biggest moments in
Proms history with a fantasy season celebrating the greats of the past and
providing a snapshot of the ever-changing classical music scene of our
times. 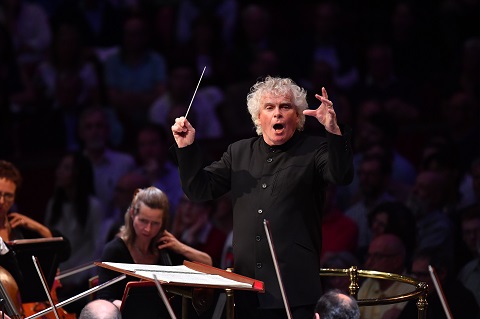 Across the season, Radio 3 has curated a vast array of show-stopping
archive performances covering four decades of unforgettable musical
stories. Across six weeks there will be a wealth of big-name orchestras and
conductors, including:

As always, the season celebrates the many faces of classical music, with
repertoire ranging from Beethoven toAnna Meredith, VarËse toMozart, Sally Beamish to Britten, Bach to Thomas AdËs. It also presents the many talents that have
made waves in an ever-changing scene. Amongst the treasure trove of
performances on offer, Radio 3 will broadcast the 2015 Proms debut of
composer and keyboard wizard Nils Frahm with ambient duo A Winged Victory for the Sullen; and the 2014 appearance
of Jules Buckley conducting the Metropole Orkest with special-guest singers and composing
sensations Laura Mvula and Esperanza Spalding.

The Afternoon Concert series on BBC Radio 3 will also feature some
of the greatest Proms of the past 25 years given by the BBC Orchestras and Choirs.

This year also sees the first ever TV broadcast of the hugely popular Radio
1 Ibiza Prom from 2015, featuring Pete Tong, Jules Buckley
and the Heritage Orchestra, who transformed dance classics
into orchestral masterpieces with the help of John Newman
and Ella Eyre (BBC Four, Friday 28 August).

On BBC Radio 3, presenter Georgia Mann will host a new
Sunday-evening programme that looks ahead to each week’s array of archive
Proms. She’ll be joined by a selection of guests to preview the vintage
performances, to recall behind-the-scenes stories of the concerts and to
recommend highlights to look out for.

Radio 3 will also be broadcasting some of the most stimulating pre-Prom
public events that have been held over the past decade, with great
interviews and conversation from leading musicians, artists, actors and
writers.

In the final two weeks of the Proms, from Friday 28 August, there will be a
series of live performances from the Royal Albert Hall from some of the
greatest musicians of our time alongside emerging talent. In what promises
to be an emotional return to the Royal Albert Hall, the Proms presents a
range of performances fulfilling our founding to mission to present ‘the
best of classical music for the widest possible audience’

As the beating heart of the Proms, each of the BBC Orchestras will perform as part of the live element of
the festival, and in long-standing Proms tradition, the BBC Symphony Orchestra will open and close the series,
beginning with an opening night conducted by Chief Conductor,Sakari Oramo and culminating in a Last Night of the Proms to bring the nation together. Led
by the BBC SO’s Principal Guest Conductor, Dalia Stasevska, the 2020 Last Night of the Proms features
soprano Golda Schultz, in what promises to be a unique and
poignant occasion. 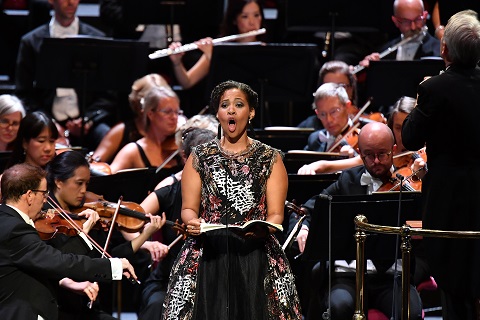 New Music is central to the Proms and a number of composers will be
commissioned to write works that respond to the current world-wide
situation caused by Covid-19. Composers includeThomas AdËs writing a new piece for the LSO Prom and Andrea Tarrodi for the Last Night of the Proms. Alongside
these works Richard Ayres explores Beethoven’s journey
into deafness, as well as his own hearing loss, with a very personal new
work performed by Aurora Orchestra.

Whilst it’s unlikely there will be an audience at the Royal Albert Hall,
the live performances will be broadcast on BBC Radio 3, BBC Four and
iPlayer.

The full schedule of artists and programmes will be announced nearer the
time of the performances to allow for utmost flexibility in responding to
the safety guidelines at the time.

Audiences are always at the heart of the Proms, but this year is truly the
People’s Proms. By utilising the many BBC platforms, this summer will
provide equally meaningful journeys for the most loyal of Proms audiences
and for those discovering the delights on offer for the very first time.

Everyday throughout the season, Radio 3’s Breakfast will invite
audiences to share their favourite Proms memories to be reflected on air
each morning. In a time of isolation for so many of us, the BBC Proms aims
to unite the nation with music. We’ll be ‘cracking open’ the Proms Time
Capsule, remembering some of the best moments of the past 125 years and
inviting everyone to join the conversation on social media – hearing from
audiences about their favourite Proms memories. Audiences will be able to
enjoy shared moments through watching and listening parties hosted by BBC
Proms on social-media platforms.

Whilst Proms are normally available on BBC catch-up services for 30 days
after broadcast, this year the season will remain online on both BBC Sounds
and BBC iPlayer for 30 days after the Last Night on the 12 September. BBC
Sounds will also release themed and mood-led Proms mixes which will be
updated throughout the season.

There will be a special collection of past Proms on BBC iPlayer for
audiences to enjoy, as well as performances live from the Royal Albert Hall
streamed directly to iPlayer.

Proms at Home for Families

After the success of this year’s highly popular BBC Ten Pieces at Home
initiative, this season families will be able to experience Proms at Home.
Families will be able to take part in special free activities built around
selected Prom broadcasts, and are encouraged to upload their creative
results to be featured on the Proms website. The activities have been
created in partnership with organisations around the UK that work to change
lives and bring music and the arts to children and young adults, including

As part of a wider offering for young people, the deadline for the BBC
Young Composer competition for 12- to 18-year olds has also been extended
until 20 July and young composers can take part in our 30 Second Challenge
until 31 August. Winners of the BBC Young Composer competition, which
encourages students of all technical abilities, backgrounds and musical
influences to get creative and submit an original composition, will
participate in a tailored development programme, and will work with a
mentor composer on a project with the BBC Concert Orchestra which will be performed and
broadcast as part of the 2021 BBC Proms.

“The 2020 Proms will be a season unlike any other in its 125-year history.
Music can be a powerful friend in difficult times and Sir Henry Wood’s
mission – to bring the best of classical music to the widest possible
audience, ‘making its beneficent effect universal’- is more important now
than it has ever been. Over the eight-week season we are proud to celebrate
the BBC’s 93-year guardianship of the festival as well as its continued
support for live music. The riches to be found in the archive of the past
four decades – including legendary concerts with some of the greatest names
in classical music – bear witness to the international standing of the
Proms, while two weeks of live performances in the Royal Albert Hall will
celebrate the beating heart of music today.”


“The 2020 Proms are a timeless mix of conductors, artists and great
performances from across many eras as well as two weeks of memorable new
performances. As an audience member, at these Proms, whether vintage or
new, you know you will have the best seats in the house for experiencing
them on air and online. Savour the atmosphere of the past and the newly
forged – and I hope electric – atmosphere of the present, with the one
constant being the magnificent Albert Hall and the great music that happens
and has happened there. Throw yourself into this year’s Proms – without
limits – and see where great music can take you.“

“It has never been more important for us to deliver great classical
performance for our audiences and also support musicians to work in these
incredibly difficult times. Working within the confines of what we can do,
we really hope the Proms on TV this year will deliver from the archive some
of the iconic orchestral concerts of recent years. And the live concerts in
August at the Royal Albert Hall will, we hope, be a positive start to being
able to do more in the future.”


For full listings of the archival Proms being broadcast this season,
please visit