This was a collaborative response to the global health crisis compiled by director and writer Sinéad O’Neill and designer Joanna Parker. Entitled Precipice, the assemblage of hour-long outdoor presentations drew inspiration from both the collective experiences of the pandemic and the magnificent surroundings of this rural idyll, its grounds offering natural performance spaces and a home to families of geese, rooks and hawks whose presence prompted the theme of creation and renewal.

With a strolling audience limited to sixty people (invited to sit on socially distanced boxes or stand on marked crosses), and dancers and musicians occupying fixed positions, there was a sense of private guests being shown around animated displays in a stately home. Within this ‘new normal’, performers could almost have been museum exhibits, a sign of the past which the novelist L.P. Hartley once memorably described as a ‘foreign country’. If a sense of loss was tangible, there was plenty of excitement to be gained from the shared intimacy of live entertainment. 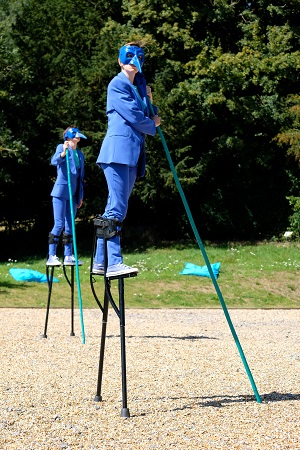 Sophie Page Hall & Antonia Mellows (circus performers). Photo credit: Joe Low.
The production’s multimedia aspect was a bold reminder of the power of live performance as a source of meaning, hope and redemption. Precipice brought together two dance groups, a pair of circus artists, a solitary cellist, a string quartet (expanding to quintet with an electronic keyboard), four soloists and a chamber choir of twelve singers strictly placed two metres apart. Artists operated independently and collaboratively and were linked by the Zimbabwean actor Tonderai Munyevu whose narrative texts, beginning with “In the beginning was the bird”, served to join each of three performance ‘stations’. The first was occupied by the sounds of a vocal aviary conjured by French-born soprano and composer Héloïse Werner, a concoction of wordless birdsong crisscrossed by amplified cries and tweets, operatic in technique and providing a suitably exotic link to Léo Delibes’s ‘Flower duet’ (Lakmé), beautifully rendered by Kiandra Howarth’s jewel-like soprano and Claire Barnett-Jones’s fruity mezzo.

Next up were three movements from J.S. Bach’s Cello Suite No.3 in C, distantly executed by Tom Isaac yet projecting clearly enough despite a gradually increasing breeze blowing across the estate. There followed a 2001 recording of John Tavener’s haunting meditation The Hidden Face – for countertenor, oboe and lower strings – performed by Grange Festival Director Michael Chance and Fretwork. Its exploration of inner silence and stillness was well-judged in the context of earlier lockdown constraints, segueing neatly to the first of two dance groups. 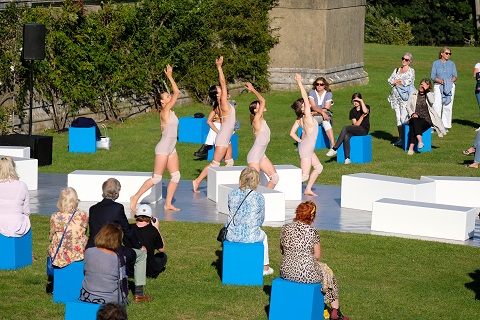 Devised by leading choreographer Shobana Jeyasingh, four young dancers (Catarina Carvalho, Rachel Maybank, Emily Pottage and Ruth Voon) presented a specially repurposed version of a 2018 work, Contagion – conceived to commemorate the 1918 Spanish Flu pandemic that ravaged one third of the world’s population and took the lives of over 50 million people. This was a moving and stylised adaption bringing together narration, contemporary music by Graham Miller and superbly coordinated ballet. Its powerful emotional effect somewhat overshadowed Sir John Tomlinson whose musings as the cobbler-poet Hans Sachs in Die Meistersinger von Nürnberg felt a little strained. Accompanied by a string group and keyboard, one largely had to imagine Richard Wagner’s richly orchestrated score and the context of a singing contest. 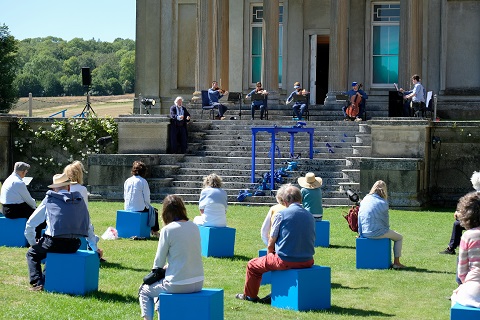 Another scene change, and we relocated in front of the building’s imposing Greek-revival columns where a second group of dancers M22 directed by South African choreographer Mthuthuzeli November provided elegant movement to several choral items. Two of these belonged to Francis Poulenc’s secular cantata Figure humaine, setting surrealist poems by Paul Éluard. Composed during the height of the Second World War, Poulenc’s ambitious a cappella vocal score is a huge paean to freedom yet, despite excellent singing from The Grange Festival Chorus, ‘Aussi bas que le silence’ and ‘Riant du ciel et des planètes’ failed to achieve the impact they might have done with al fresco considerations rendering too slow a tempo and unclear diction. Lili Boulanger’s Hymne au soleil (1912) fared better in its marvellous evocation of a rising sun. New to me was the gifted American composer Caroline Shaw whose truncated Partita for 8 Voices left a deep impression.

In short, Precipice was an artfully planned and smoothly executed collaboration, demonstrating an indomitable optimism and spirited enterprise. A veritable triumph over adversity.