Evening with Rosina Storchio, Jaho and pianist Steven Maughan presented music which had been created
for and championed by Storchio. Mascagni, Leoncavallo and Massenet remain
at the heart of Jaho’s debut recital disc, Anima Rara (for which
she is joined by the young Italian conductor Andrea Battsitoni and the
Orquestra de la Comunitat Valenciana), but the songs and salon pieces – by
Donizetti, Bellini, Bizet, Tosti, Toscanini and Gonoud – that we heard at
Wigmore Hall have been replaced by operatic numbers by Catalani, Boito,
Verdi and Puccini. Neither the diversity of mood nor the sense of discovery
that that Wigmore Hall programme offered have been lost, though: alongside
Butterfly’s ‘Un bel dÏ’, Violetta’s ‘Teneste la promessa … Addio del
passato’ and Manon’s ‘Allons! Il le faut … Adieu, notre petite table’,
there are rarer offerings – from Giordano’s Siberia, Leoncavallo’sLa bohËme, Mascagni’s Iris, Massenet’s Sapho and Boito’s Mefistofele.

Puccini frames the sequence. ‘Un bel dÏ’ makes for an impassioned opening:
it also has a recitative-like freedom which suggests that Jaho and
conductor Andrea Battistoni had long conversations and lengthy rehearsals.
Jaho’s vibrato is quite broad: but it is employed to create a febrile
intensity – there’s no doubting this Cio-Cio-san’s self-belief and
emotional fervour, though there is a lovely withdrawal which captures
Butterfly’s inner faith and certainty: “Io non gli scendo incontro. Io no.”
(I do not go to meet him, not I.) Madama Butterfly’s final moments
close the disc. When she reads the inscription of her father’s knife, ‘Con
onor muore’, Butterfly understands her fate: “Who cannot live with honour
must die with honour.” The brusque and brutal utterances of the cellos and
double basses of the Orquestra de la Comunitat Valenciana anticipate the
stabbing blade; the subsequent orchestral explosion embodies both the
psychological fracture and the physical horror. Jaho sounds unhinged; every
ounce of Butterfly’s desperation resonates with terrible directness. 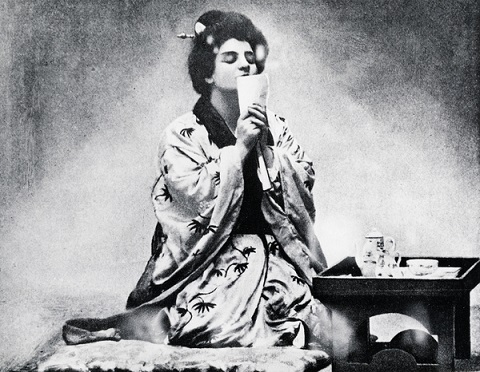 Rosina Storchio as Cio-Cio-San at the premiere of Madama Butterfly at La Scala Theatre in Milan, 17th February 1904.

From La traviata we have ‘Teneste la promessa… Addio del
passato’: despite pËre Germont’s belated understanding, Violetta knows it
is too late, and she bids farewell to love and life. The engineers ensure
that Violetta’s spoken words are clear – and, gosh, they erupt with emotive
fire into soul-gripping recitative. But, the forces of Orquestra de la
Comunitat Valenciana are fairly conservative and given the expansiveness of
Jaho’s expressive mode, a fuller tutti string texture might have
been welcome (there’s some terrific oboe playing though!). The way Jaho
combines vocal control and impassioned expression is stunning: “A lei, deh,
perdona; tu accoglila, o Dio, Or tutto finÏ.” (And may God pardon and make
her his own! Ah, all is finished.) is a heart-breaking integration of
resignation and resistance. If I had one ‘criticism’ it would be that I’d
like more ‘text’, and more consonants, but the vocal febricity is
sufficient recompense – even when she withholds Jaho’s soprano pierces to
the heart.

There are two numbers from Leoncavallo’s La bohËme. In
‘Musette svaria sullaj bocca viva’, MimÏ describes Musette’s beauty and
addiction to love to the revellers at CafÈ Momus. Jaho doesn’t do
playfulness with quite the same panache that she does poignancy or passion;
there’s not quiet enough ‘sway’ in the voice, and as she trips through the
jaunty phrases there’s an occasional ‘edge’ to the tone, though when she
opens up at the top her soprano is glossy and full. Musette returns the
favour, extolling her friend’s charm and cheerfulness in ‘MimÏ Pinson, la
biondinetta’ (in the opera she is joined at the close of the short aria by
the full-throated bohemians). Jaho doesn’t quite match the
instrumentalists’ debonair lightness and easefulness, but she copes well
with plunges down to the lowest end of the soprano’s range and dances back
up to top with elegance.

Massenet’s Sapho also presents a ‘fallen woman’ – Fanny Legrand,
an infamous artist’s model. When her younger lover, Jean, rejects her
because of her disreputable past, she pursues him from Paris to Avignon and
in ‘Pendant un an je fus ta femme’ she pleads with him to return to her.
Fanny’s soaring sweet arcs are tailor-made for Jaho, who floats them with
exquisite delicacy, tapering the phrase-ends so that the beauty seems to
linger in the silence. Battistoni listens and responds to every hint of
inner passion: the tender accompaniment pulsates gently but blooms
instantly when Fanny’s implorings burn with longing. “Viens! Car tu m’aimes
encore!” presses Jaho, with urgency and power, before a sudden retreat
exposes her vulnerability, “Vois ma douleur”, only for the whispered thread
to swell richly once more, in desperate need, “seul, tu peux l’apaiser.”
(See my pain, you alone can ease it.) Jaho controls the emotional and
dynamic fluctuations superbly; three repetitions of “Viens!” span an
emotional gamut and bare a whole soul. Her pianissimo is
heart-melting – “ta bouche ne saurait oublier mon baiser” hovers
hypnotically on a top Bb, somehow both angelic and tempting.

In the opera’s final act, alone and abandoned Fanny reflects on the misery
love has wrought. The orchestral Prelude, ‘Solitude’ is beautifully played.
Battistoni finds tension and drama in the smallest motifs; the colours are
rich, the flexible phrasing is refined, the strings’ tone is intense. Jaho
does not just communicate Fanny’s suffering, she lives it, her voice
seeming to throb with the rawness of her broken heart. And, at the close
there’s a wonderful softening and relaxation which embodies Fanny’s hope,
as she thinks of the future, of how she will return to her illegitimate
child and raise him to be good and honest, and thereby find happiness. 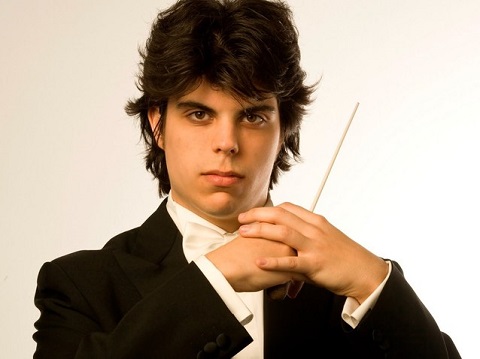 Mascagni is similarly represented by a pair of arias. In ‘Un dÏ (ero
piccina)’ from the second act of Iris, the eponymous heroine –
kidnapped by the lecherous Kyoto – remembers a painted screen that she saw
when she was a child with its image of a young woman being tormented by a
huge octopus, a symbol of sexual violence. The pressing pace and rolling
woodwind lines, propelled by the solos strings’ subtle accents, create a
tense urgency and Jaho’s whispered recollections, climbing ever higher
through chromatic twists, vividly capture Iris’s growing terror as she
understands her fate. As the dreadful image re-forms itself in her mind,
Iris’s agitation and anxiety explode in startling vocal outbursts. A smile
that was a spasm, the tentacles that squeezed and bound her face: the
thrilling vividness of Jaho’s soprano reveals such images to be scorched
into Iris’s memory, and the latter’s horror seems a palpable and petrifying
force that lifts Jaho’s soprano with uncanny ease to shining heights,
“Quella piovra Ë la Morte!” (This monster is death!) After such
overwhelming, hypnotic hysteria, the earnestness and gentler passions of
Suzel’s first aria, ‘Son pochi fiori’ (L’amico Fritz), in which
she gives the wealthy Fritz a birthday bouquet, confirm Jaho’s expressive
range, and the warmth of her lower register. We are denied Fritz’s response
to her gift, but the violins’ and flute’s reprise of Suzel’s melody forms a
tender postlude. 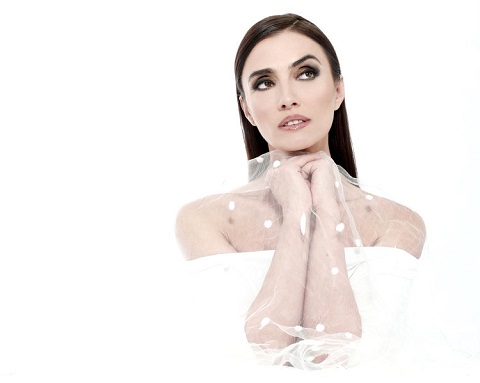 Most of the numbers are just a few minutes long, so it’s good to have the
opportunity to hear ‘Ah! Il suo nome! … Flammen perdonami …’ from
Mascagni’s Lodoletta – a twelve-minute death-scene which was a
highlight of Jaho’s Wigmore Hall recital. The recording does not
disappoint. And now we have the orchestral canvas too, which Battistoni
paints with sensitivity and eloquence. The woodwind playing is particularly
fine and there are some touching string solos. Jaho segues from blissful
anticipation, when Lodoletta arrives at Flammen’s house, through peace and
certainty, to pained misunderstanding and despair, and finally to ecstatic
delusion and death. There’s not a phrase that does not pulsate with
emotion; not a phrase that does not develop, dramatise and deepen our
understanding and sympathy.

Anima Rara
is a must-buy for this track alone, but there are other revelations, too,
from similarly long-neglected repertoire. ‘L’altra notte in fondo al mare’
from the third act of Boito’s Mefistofele, which Margherita sings
from her prison cell, begins with a dark string prelude that slithers its
way down in the depths of the dungeon, where this Margherita raves with
quasi-delirious fervour. Jaho’s arppegiac, decorative meanderings are
pristinely executed and crystalline. In contrast, Stephana’s prayer, ‘Nel
suo amore rianimata’, from Giordano’s Siberia is the epitome of
poised contentment, the final “Amor …” sustained with infinite calm. A
similar controlled composure characterises ‘Ebben? Ne andro lontana’ from
Catalani’s La Wally. Jaho’s firm line, centred focus, and vocal
vehemence capture Wally’s inner strength and resilience, as she vows to
defy her father’s threats to marry her to the man of his choice, Gellner.

Opera Rara presents Jaho’s performances immaculately. Musicologist Ditlev
Rindom supplements his article about Rosina Storchio with additional
information about the arias, placing each in the context of their first
performance, and of Storchio’s career, and providing helpful musical
observations to guide the listener’s ear. The booklet is illustrated with
photographs, of Jaho, Battistoni and the musicians, in rehearsal and in the
recording studio, and of Storchio herself.