This was a long-overdue Wigmore Hall debut for Llewellyn (and a welcome return for me, after six months’ absence). Ten years ago, she charmed audiences and critics at English National Opera, as MimÏ in a
revival of Jonathan Miller’s production of

, and her subsequent performances as the Countess in
Figaro
and as MicaÎla in


were highly acclaimed. She took her

Countess to Opera Holland Park in 2011

Then, she seemed to slip from English opera houses’ radars, and in the
years that followed it was in Germany, Denmark, Bergen, and also the US –
in Seattle and at the Met, where she made her debut in Porgy and Bess in 2019 – that Llewellyn found employment and
success. OHP welcomed her back in 2017 to sing the role of Magda in
Puccini’s

It took until this year, for ENO to re-open their doors to Llewellyn: she
performed the title role of Verdi’s

in February, the run ending just before the pandemic forced the theatre to
close its doors.

On most of the occasions when I’ve enjoyed Llewellyn’s performances, she’s
been singing 19th-century Italian repertoire; there’s been
Mozart and Bizet, too, but nothing German. So, I was intrigued to hear how
she would fare in Richard Strauss and Mahler. She began with five of the
former’s songs and was understandably a little nervous in the opening
‘Einerlei’: the vibrato was somewhat taut, the tone a little edgy. But,
despite this Llewellyn was still able to garner a sense of wonder – “Her
mouth is always the same,/ Its kiss ever new,” sings the protagonist – and
to float an exquisite gentle final line, “O du liebes Einerlei” (O you dear
sameness), which rose airily. Notable, too, was the sparkling freedom of
Lepper’s accompaniment and the dreamy joy of the piano’s postlude. Lepper
was an equal partner in this recital from first to last, interpretatively
in tune with Llewellyn’s readings but also assuredly focused, and innately
sensitive, in communicating the piano’s part in the conversation.

‘Allerseelen’ (All Souls’ Day) was shadowy and subdued, though Lepper
intimated the emotional expanse and the poignant burden. Llewellyn also
seemed to get more of the measure of Wigmore Hall’s acoustic – the image of
the beloved’s sweet glance (“deiner s¸ﬂen Blicke”) was pure, crystalline
and tender – although, throughout the recital, she did occasionally push a
little too hard in a venue which is kind to singers and instrumentalists
alike. The clean, clear enunciation of the German texts was unwavering, and
in ‘Nachtgang’ (A walk at night) – which demonstrated the evenness of the
soprano’s range, with a lovely rich lower register complementing the sheen
at the top – Llewellyn began to relax and to respond to the text with
ever-increasing acuity: emotive colour imagery (“wie auf Goldgrund/rauht
dein schˆnes Haupt”) and palpable physicality (“und k¸sste – k¸sste dich
ganz/ leise”) were reverently and touching rendered, respectively. The
vocal reading conveyed a real sense of the communicative potency of the
poetic form, while Lepper’s trembling closing commentary captured the
weeping of the soul, “meine Seele weinte”. The fear that assails the
protagonist of ‘Die Nacht’ – that the night will steal the beloved one away
– was wonderfully conveyed by Llewellyn’s diminishing final phrase, “O die
Nacht, mir bangt, sie stehle/Dich mich auch”, and Lepper’s discomforting
rocking at the close. The duo saved the best of their Strauss sequence till
last: ‘St‰ndchen’ (Serenade) shimmered with joyful anticipation and
Octavian-esque elation. The piano literally fizzed with over-excitement and
youthful passion. 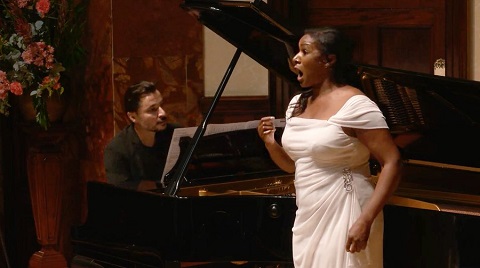 Mahler’s R¸ckert-Lieder, at the end of the recital, were even more
impressive. Llewellyn was as alert to the poetic imagery as she was to the
musical profundity; small details were highlighted with care and insight.
‘Ich atmet’ einen linden Duft’ (If you love for beauty’s sake) established
a lucidness and length of line that was sustained throughout the five
songs. There was a stirring tussle in ‘Blicke mir nicht in die Lieder!’
(Don’t try to find me out through my songs!) between the piano’s spiralling
unrest and the confidently shaped vocal utterances. ‘Liebst du um
Schˆnheit’ (If you love for beauty’s sake) drew the listener’s heart close
with its controlled intensity, luxurious vocal colours, and the loving
articulation of the musical and poetic imagery by both Llewellyn and
Lepper. ‘Um Mitternacht’ (At Midnight) was sombre, portentous but also
majestic. A long silence followed the piano postlude to ‘Ich bin der Welt
abhanden gekommen’: it truly did feel as if we were ‘lost to the world’.

For all the musical and emotional strength of the Mahler songs, the peak of
this recital, for me, came in the songs which were framed by Strauss and
Mahler: Samuel Coleridge-Taylor’s 6 Sorrow Songs (1904), settings
of Christina Rossetti. The term ‘sorrow song’ came to prominence when
W.E.B. Du Bois used it to describe the negro spirituals which, he argued,
were an essential part of American cultural expression. Each section of Du
Bois’ The Souls of Black Folk (1903) opens with a short verse and
a musical phrase. In the final essay, ‘Sorrow Songs’, Du Bois writes: ‘they
that walked in darkness sang songs in the olden days – Sorrow Songs – for
they were weary at heart. And so before each thought that I have written in
this book I have set a phrase, a haunting echo of these weird old songs in
which the soul of the black slave spoke to men.’

The mixed-race Black-British composer Coleridge-Taylor met Du Bois in July
1900 at the Pan-African Conference in London which brought together men and
women of African, Afro-Caribbean and Afro-American descent to debate and
campaign for Black rights. Twenty years later, Du Bois wrote of the
Conference, ‘above all, I remember Coleridge-Taylor’; during the
Conference, he had attended a performance of Hiawatha’s Wedding Feast, conducted by Coleridge-Taylor at Crystal
Palace Arts Centre: ‘It was a moment such as one does not often live. It
seems, and was prophetic.’

Coleridge-Taylor may have been similarly inspired by his meeting with Du
Bois, in naming his ‘Sorrow Songs’, which he dedicated to his wife, Jessie.
These songs, which tremble with emotion, suffering and resilience, need an
interpreter to whom both the words and music speak with directness and
honesty. Llewellyn, British-born and of Jamaican descent, is one such
interpreter. There’s a pre-Raphaelite preciousness about Rossetti’s
melancholy poems, but Llewellyn and Lepper largely overcame this with the
candour of their musical communication. The second song, ‘When I am dead,
my dearest’, flowed with quiet resignation, tinged with sad nuance;
Llewellyn’s firm middle and lower range served the song beautifully. The
languid and free triplets of piano in ‘Oh roses for the flush of youth’ was
matched by the fluidness of the vocal phrasing. ‘She sat and sang always’
might have had a swifter lilt – if only to create more variety between the
songs – but Lepper’s right-hand elaborations, over the ostinato rhythm in
the bass, were expressive and spacious, and there was a lovely exotic tint.
Perhaps Llewellyn might occasionally have lessened the operatic fervour of
the crescendos and peaks; they were powerful but less might have been more,
as was confirmed by the plunging and vanishing of the final vocal phrase,
“Her songs died on the air.” ‘Unmindful of the roses’ had a lovely
expansiveness and compelling momentum. The rhetorical pointedness of ‘Too
late for love’ found its way straight to the listener’s heart.

Llewellyn returned to Coleridge-Taylor for her encore: ‘Big Lady Moon’ from Five Fairy Ballads. It was an enchanting conclusion to an
uplifting lunchtime recital.


This concert was streamed live on the Wigmore Hall website and is
freely available for 30 days following the performance.

Lucile Richardot – a class act in Berio To Sing

Covid’s Metamorphoses: an anniversary Song Gala at Wigmore Hall leads the way to hope and renewal