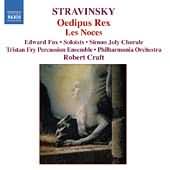 Robert Craft has begun an ambitious project of recording Stravinsky’s oeuvre with two of the best dramatic works, Oedipus Rex — a sort of melodrama in a fever — and Les Noces (The Wedding), which simply defies any generic classification. The two make an ideal pairing, Rex as high drama told at a breakneck crawl, Noces as a kind of musical Polaroid camera that churns through frozen snapshots with a mind numbing velocity. Craft was a close confidant and collaborator with Stravinsky, and was responsible for many premiers and other definitive statements. For better or worse this fact brought down upon his head a certain amount of critical skepticism on the part of academics. This can be set to one side in these recordings, which are certainly reliable in a workaday sense, if a little tepid in terms of insight and energy.
I like my Stravinsky recordings crisp — lines well separated, with a good sense of presence and definition in all the parts — which is why I find this Naxos recording sufficient (as most Naxos products are), but only sufficient. Recorded at the Abbey Road Studios in London, they have a certain “live” presence, an indefiniteness in the mix, where I would have appreciated more precision. In all fairness to the recording engineers, Noces is a fatally flawed recording proposition to begin with: scored for four pianos, a small army of percussion instruments, chorus, and vocal soloists, it will never be recorded in anything like its live imprint. The effect of the four pianos in concert is not to be replicated, but we might hope to get something of the percussion at appropriate moments, and this is usually the case here, with the exception of the all important bells, too often obscured and kept from playing their role as a kind of place marker in the music. Oedipus is another matter. Its drama allows for a recording engineer to create a drama in the mix, bringing essential dramatic persons and instruments forward, while letting the inessentials recede into the background. On some tracks this is done with astonishing accuracy, but on others it seems hit or miss. Here is where an engineer should come into their own, but only if they can compound craft with a really good sense of the music. Intuition seems slightly lacking on this recording.
The artists involved, singers and instrumentalists alike, are all adequate, again in the normal Naxos fashion, but no individual performance stands out. While this would set the music forward, were it any other composer, Stravinsky — to remain crisp — requires a fine sense of artistic individuality, a humor like his own, to bring the best out. You can’t simply play Stravinsky, as you might Shostakovitch, and leave the drama to the score. Stravinsky’s music is a cult of the personality, like the man, above musical logic. Lose sight of that fact and the result is tepid at best. While there are moments of individual genius here, for the most part the work is simply workmanlike.
Caveat emptor: these recordings were released previously on the Koch International Label. The apparently anonymous translation of Rex is a serviceable, albeit liberal synopsis of the Latin text. Latin-deprived souls will have to extrapolate from the English gloss. The transliteration from the Cyrillic and English translation of Les Noces by Philip Taylor, on the other hand, shows considerable care and fidelity.
Lukewarm recommendation.
Murray Dineen
University of Ottawa