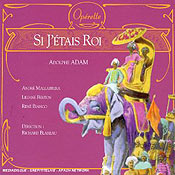 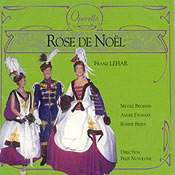 Accord has gone back to the vaults for an attractively packaged series called “Opérette.” On the evidence of two of the sets, these releases feature recordings made in the late 1950s and early ’60s. The booklets are entirely in French (and offer no librettos whatsoever), but even a French-challenged persons such as your reviewer can understand the inside front cover, which appears to explain that the recordings are the efforts of “L’Academie Nationale de l’Opérette.” This organization appears to have as its rationale — all right, raison d’etre — the preservation, if not resuscitation, of the great French tradition of light musical entertainments. With bold, bright colors decorating the packaging, the sets come across as delectable candy boxes — but how much sweetness one will enjoy when partaking of the series does depend on a taste for the bouncy, frivolous world of operetta.
The Lehár set, titled Rose de Noel, is a bit of a curiosity. No such title would be found in a catalog of Lehár’s works. A Professor Rekai and Paul Bonneau adapted the music from a number of Lehár’s German operettas [see Editor’s Note below], and a Raymond Vincy concocted the French libretto with a new story line. As such, the end product calls to mind some Opera Rara sets of adapted Offenbach, such as Christopher Columbus. Opera Rara, in that set, offered an index of which numbers had been appropriated from which Offenbach operetta; Accord does not offer this helpful information. A couple of the tunes do sound familiar, but as operetta music tends to always sounds familiar, even when first encountered, no specific conclusions can be deducted from that fact.
At any rate, the set is quite short — on two discs just barely over 80 minutes total time, and of course, that includes quite a bit of dialogue. The performances have wonderful Gallic flair, and for Lehár fans, the appeal of hearing the music without a Teutonic tone may have great appeal. For others — the 80 minutes may feel much, much longer.
The Adam presents quite another story — though still somewhat short and dialogue heavy, especially on disc two. Here is a delightful series of tunes from a composer all but forgotten, except for his ballet score Giselle and the great but sadly over played Oh Holy Night. In fact, some music in act two (Pour le royal banquet) shares the same snappy rhythm as Adam’s tremendous tenor showpiece from the opera of the same name, Der Postillon von Lonjumeau (as recorded on Capriccio 60-040-2). Adam offers a greater variety of mood and tempo than Lehár does, although it would be stretching the truth to claim that the music suggests a long-lost gem. The entertainment quotient, however, is very high.
For fans of French tenor head voice, Andre Mallabrera puts on quite a display. His light soprano counterpart, Liliane Breton, warbles a bit more than one would accept from even a beloved canary. The chief counterweight to these high, sweet voices is the graceful baritone of Rene Bianco. Richard Blareau’s direction manages the neat trick of keeping the soufflé fresh and never in risk of deflation for 90+ minutes.
The inside covers feature numerous pictures of other titles in this Opérette series, perhaps the most well known title being Offenbach’s La Belle Helene. If that set has the native tang and flair of these two sets, it might be quite a pleasure.
It might take the online shopper some time to find from where these sets can be ordered, and of course, reading French will allow for at least a basic understanding of the plots, as a synopsis is provided. For a colorful, tuneful glimpse at a world long gone, the Opérette series looks to have a wonderful viewing platform to offer.
Chris Mullins
Harbor Teacher Preparation Academy
[Editor’s Note: The Accord Opérette series is available in the U.S. through Premiere Music Distributors and in Europe through Amazon.fr and other vendors.

A question has arisen as to the source of Lehar’s music for Rose de Noel. The music for Rose de Noel was based on 17 unpublished airs found in the Budapest Conservatory by Professor Reka&iumlaut. These were for a new unpublished and unperformed work that was to be titled Premier battement de coeur (First beating of the heart), the scenario for which was by journalist Karl Kristof. Permission to use the airs was obtained from Mme. Paphaza&iumlaut, sister and sole heir to Lehar.

Bonneau realized the score because Reka&iumlaut had trouble getting out of Hungary, although he eventually did, and Vincy wrote the livret. It was well received and given 415 consecutive performances at Maurice Lehmann’s Châtelet.

Click here for additional details and citations to source materials.]