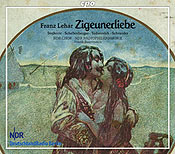 One of my oldest memorabilia is a programme of a performance of Zigeunerliebe by my father’s operetta company just after the war. It was one of the many amateur companies in Flanders though the title roles were sung by good singers who earned extra money by combining a few companies. I was too young to assist at this performance but a few years later I would be a regular spectator. The moment I could read I was put into service rehearsing my father’s lines. Every time the company put on a new piece I eagerly read the libretto. Most people nowadays think that an operetta is something like a Carmen with a few dialogues but that’s definitely not true. A Lehár operetta always had a lot of spoken dialogue and often had a 50% spoken 50% sung lines balance. Many an operetta lasted 3 hours without including pauses.
That’s the first thing that struck me in this new recording: not a single sentence of dialogue is included. Personally I like that better than the half hearted solution used in the famous EMI-series (Gedda, Rothenberger) where small artificial dialogues full of clichés were included between musical numbers. As these two CD’s include the full score (119 minutes) one can easily conclude there will rarely have been complete performances. As such this is an absolute first among recordings.
Many collectors have a copy of the 1951 radio performance with Herbert Ernst Groh and that has some 20 minutes of music cut. The score was even more drastically cut in a 1975 TV-recording that at the time made the rounds of European public channels. A pity as that colourful spectacle had some outstanding singers and that’s where this new recording is a little bit at fault.
The reasons are several. The operetta tradition is gone and therefore the style, the way of singing is gone. Every bawler with a big voice can get through an opera for a few years but for operetta what is needed is impeccable legato, imaginative phrasing and tons of charm. Fritz Wunderlich never performed one operetta on the scène in his whole short life but nevertheless could sing tons of operetta with utter conviction, steeped as he was in the tradition in the fifties when one could hear Tauber, Wittrisch, Schock, Anders, Klarwein etc all day long on every radio channel.
This is somewhat lacking in most singers in this recording. Take the male lead tenor Zoran Todorovich. There isn’t much charm to be heard, some harsh sounds and an unnecessary difficult high C in his big aria, no doubt picked up by listening to Joseph Schmidt’s classic recording. The second tenor which ideally should be sung by another lead singer is here given to Bernhard Schneider, a smallish buffo voice instead of the full tenor voice the score requires (Adolf Dallapozza was wonderful in the TV-version). But this is now a perennial operetta problem. Before the war there was far more money to be earned in operetta and a big spender as Tauber was lured into service. Nowadays all money (taxpayers’ of course) goes to opera and any tenor with a little bit of voice tries to make his way exclusively in the opera house and operetta has to do with the less talented singers.
The ladies are better. Johanna Stojkovic sings with gusto and a good sense of style. Dagmar Schellenberger as the other lead soprano (one can more easily cast most operas than Zigeunerliebe) is even better. The voice is warmer and she knows how to sculpt a waltz. She has of course one of the best tunes though here too her ‘Hör ich Zimbalklänge’ doesn’t come near to Pilar Lorengar’s wonderful recording of the aria.
Every Lehár operetta has a lot of comprimarii and they are more than acceptable; in fact they are better than their colleagues on the famous EMI-recordings where singers (well, actors with a little bit of voice) like Harry Friedauer often were the fly in the ointment. Frank Beermann and his radio-orchestra know their Lehár and they show the lush orchestration, the unbelievable melodic richness of the master at its very best. But, even Beermann cannot quite overcome the great musical contrast between the formidable beauty of the score for lead singers and the somewhat trivial, though still melodious, numbers for the buffo couple (necessarily as a lot of people flocked to the theatre for buffo Hubert Marischka at the time of the première). Anyway due to the completeness of the recording, the excellent sound and some good female performances this is a recording that cannot be missed.
cpo has recently done a lot of good for Lehár’s artistic heritage. They issued a 1974 radio-recording of that fine work that is Der Rastelbinder (somewhat forgotten as it couldn’t be performed in the Third Reich because the title role is a Jewish tinker). Even better they recorded Der Sterngucker of which barely a note was known and they gave us Die Perlen der Cleopatra by Oscar Straus. Let’s hope they will continue the good works as we are still without recordings of Wiener Frauen, Die Ideale Gattin, Die Blaue Mazur, Clo-Clo, Libellentanz and that forgotten masterpiece Eva (which only exists in a Spanish highlights-version, though one doesn’t envy the recording firm that has to find a singer that can compete with the Octave Flaubert of Alfredo Kraus during his heyday).
Jan Neckers
[Editor’s Note: Click here for more information on the operettas of Franz Lehár.]