Ashley puts
into close proximity two dramatic states–the first, a long,
process-like state of suspended intelligence, a kind of cultivated stupor,
the second constituting brief, extremely clear moments of heightened
awareness, a sort of penetrating focus that cuts through the trivial and then
transforms it into the meaningful. 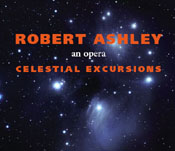 If my description sounds like life under the influence of a cocktail of
antidepressants laced with the occasional stimulant, so be it, for
Ashley’s oeuvre, more so than any other composer’s work in this
reviewer’s experience, comes the closest to confronting consciousness
in a modern world of tailored pharmaceuticals. This is not to say his work is
programmatic, designed by intent or by accident to resemble the workings of a
sedated mind, for it is anything but sedate. Instead Ashley’s work
confronts us with the same kind of consciousness that a life on Prozac (or
vodka, or mushrooms, or trancing) mixed with occasional lapses into
recreational pharmacy must confront us with. It addresses the potential for a
deep and prolonged depression derived from the consciousness of the fact that
the world our parents promised us so as to get us to sleep at
night–filled as it was with regularity and good design–is a
phantom, and it makes no sense (in opera or in the conduct of one’s
daily affairs) to pretend otherwise.

Ashley’s operas follow in the mold of Beckett’s drama. As much
as it hurts to recognize this fact, the world is comprised of characters
taking ultimately random trajectories amidst great swaths of trivial and
quotidian detritus. If we can find a few diamonds sprinkled in the refuse, we
are much the better for it. Our world, if it doesn’t make complete
sense, makes a kind of sense, sometimes brilliantly. Ashley’s opera, if
they don’t make complete sense, make a kind of sense, often
brilliantly.

To reiterate, Ashley puts into close proximity two dramatic states. The
first of these–Beckett like in quality–takes us through a long
process of seemingly random verbiage produced as if one were flipping
channels through a dozen talk radio shows. This is the quintessential North
American experience of the meaning of meaninglessness, a kind of Zen
mindedness produced unintentionally (but not without design) by the unbridled
proliferation of individually innocuous media. The flow produced thus in
Ashley’s work has a chant-like quality, hypnotic and drone-like, which
the musical accompaniment to the drama compliments perfectly. Into this
ribbon of detritus, Ashley sows little snippets of lyric with a deceptive
regularity, snippets of extreme importance to us, both as listeners and (in a
sense that makes his work so important) as citizens, or at least denizens, of
our modern world. Although it is quite impossible to say precisely what the
relevance of these phrases is, either to the work at hand or to our interests
(and even our best interests), we are riveted by them. They are redolent of
meaning, if they don’t actually mean anything themselves. Here are two
such snippets from Foreign Experiences, the end of scene 10 in Act 1:

Opinion blew him up against the wall
Then having suffered enough or having
Been cleansed depending on your point of view
He was accepted as a neighbor they even started
Speaking English he could buy a loaf of bread he could
Get his shoes shined…. 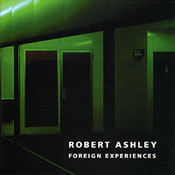 In the first instance, our parents never told us about the drugs, when
they were discussing the other parts (our normal routines, from the shower to
the broker); the second instance describes perfectly the average North
American’s reception as a stranger entering a new neighborhood in the
friendly global village, where television and the computer have done
absolutely nothing to break down territoriality.

The kind of meaning produced here is like that given off by Thorton
Wilder’s absolutely maudlin peon to American domesticity, the play
Our Town. The essential meaning is all sidereal, which, despite the
playwright’s best intentions, draws us back to the play again and
again. This is a meaning without a central core; these are lives that derive
meaning from convention rather than substance. Substance–dependency on
drugs, acceptance by neighbors (and thus access to bread and vodka)–is
glimpsed only in haphazard fashion. Substantial meaning benefits from this
approach, since to stare at substance for too long is to remove it from
one’s awareness.

Given these parameters–a sort of evaporated content that gives way
every now and then to glimpses of substance–Ashley’s work derives
its greatest characteristic quality from text enunciation and setting.
Ashley, himself, takes many of the principal roles. His is a suitably
monotonic voice, roughly articulated in some barely identifiable drawl
(indecipherable to a Canadian, but situated presumably somewhere between the
Carolinas and Texas). He sounds like someone overheard in the adjacent
restaurant booth, every so slightly agitated or merely overstimulated, who
carries on a monologue just slightly above the volume observed by decorum,
and thus as good as in your face, since you and everyone else in the
restaurant is drawn to it as if it were an aural magnet. This is a person
saying in full voice things that are normally whispered in restaurant booths.
The text works its way into the psyche as both forbidden and yet necessary,
as uncomfortable and yet intensely interesting.

Ashley’s characters are made generally to articulate the text in a
sort of bare enunciation–in a stupor, or trance like–against
sparse accompaniment (monodic, in the sense of the term monodrama
hearkening back to Peri and the origins of opera as drama). Worked into the
flow are songs, duets, choruses, dramatic interjections. In Wagnerian
fashion, the singers segue into and out of these indiscriminately; they
seldom plant their feet and bring forth an aria.

I liken Ashley’s operas to Richard Ford’s Independence
Day. We sense that great things–monumental things–are going
on, of which the musical moments in the operas are but mere symptoms. The
greatness is left inarticulate, merely sensed, slouching behind the sheer
volume of the whole. Like Ford’s novel, Ashley’s work is
centrally American–about American real estate, so to speak. The images
that emerge have a particularly American quality about them: witness
protection programs will be invoked alongside Death Valley segueing to
Death’s Door Hospital, to “Somewhere in the Great
Southwest,” and the Bob Willis Band, the “Milk Cow Blues,”
Subaru, the sharp sound of a rifle and the subsequent sharp blow to the
chest, an adopted daughter, Walnut, an American Indian.

The participants in these operas are familiar faces in the Ashley circle:
Sam Ashley, Jacqueline Humbert, Joan La Barbara, “Blue” Gene
Tyranny, Tom Hamilton, Thomas Buckner. Some have been with Ashley since the
days of Perfect Lives (since the late 70’s), and this familiarity is
evident in the ease with which they perform his work. Of the three operas
under review here, Foreign Experiences has a narrative tension
unlike that seen before in Ashley’s operas–a taught quality that
derives from the slightly paranoid nature of a protagonist. The two voices
involved in this recording–Sam Ashley and Humbert–retain,
however, the hypnotic quality of Ashley’s other work, paranoia aside,
and the result is a very pleasant discrepancy between the obvious tension of
the plot and the trance-like ease of the narrative. This calls to mind,
again, pharmaceuticals, as if under heavy sedation one laughingly yields
one’s now distant body into the waiting arms of a surgeon.

Ashley’s work is the central pillar of Lovely Music’s ever
impressive catalog. Details can be had at their website: http://www.lovely.com/ . There is a
thumbnail bio of Ashley at Wikipedia, with interesting links, and an
excellent interview article at http://www.lovely.com/press/articles/Wire%20No.234.pdf
. Early work is available through the “Art of the States” website
and through the ever astonishing ubu.com.