The company seemed to know this in advance, when they chose to highlight
Paulette Marrocou’s Leonora on the posters. A striking woman, she began rather low-key, but by
the convent scene of act two, she had found her comfort zone in Leonora’s growing desperation.
While not conventionally beautiful, Marocou’s soprano has an alluring edge, and her top, as
heard at Sunday April’s first matinee, rang out in the cavernous Civic Center acoustic with
power. 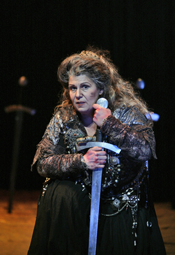 The greatest ovation at final curtain, however, went to Marianne Cornetti, who sang Azucena
with the sort of wild abandon and penetration of the role’s greatest contemporary exponent,
Dolora Zajick (there’s is also a slight physical resemblance). Unlike Zajick, however, Cornetti’s
strength lies mostly at the top, and the middle voice has less punch. Furthermore, Cornetti’s
audience-pleasing contribution did not have the subtler touches of Marrocou’s Leonora, but
subtlety may not always be what an audience wants from a Il Trovatore performer. In the smaller
role of Inez, Priti Gandhi had some affecting moments.

As for the men, the show started with veteran Hao Jiang Tin’s Ferrando. His is a solid bass
sound, but it takes more fire and drama to make this exposition-heavy first scene truly effective.
Alexandra Agache equalled Cornetti in sheer lung power. If only the voice itself were more
interesting. “Il Balen” started well enough but soon the monochromatic tone of Agache’s baritone
dimmed its success. On the other hand, he gave a good physical performance, and his
confrontation with Marrocou’s Leonora in act four may have been the best scene of the day.

And the title role? San Diego Opera had announced Nicola Rossi Giordani as its Manrico, and
only a few weeks ago revealed that Dario Volonté would take the lead. Volonté had sung a
creditable Calaf in San Diego a couple seasons back, with the concern then being that he
undersang too much of the evening to give his all to the big moments. Sunday’s performance,
unfortunately, increased that concern. Volonté’s basic sound has a warmth and sweetness that
makes one want to hear more of it, but he seems unable or unwilling to fulfill that desire. Your
reviewer thought he was hoarding his resources for his big act three scene, but even there, the
volume did not appear. Nonetheless, a solid, though smallish, high note (reportedly a high C)
capping “Di quella pira” earned the tenor a thunderous ovation. The foot stamp that accompanied
the note was regrettable, however, and your reviewer would have enjoyed hearing some cries of
“Madre infelice!” as well.

Edoardo Müller has led some strong performances for San Diego, especially in the Italian
repertory, but Sunday’s felt decidedly low-energy. Faced with a cast of varying decibel-level,
perhaps this is understandable, but there were also a couple of spots of poor pit-stage
coordination. 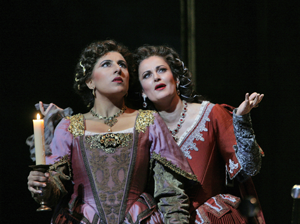 The physical production, by Benoit Dugardyn, is handsome enough (it has also been seen in Los
Angeles and Houston). Shifting walls of ragged, burnt wood quickly take us from scene to scene.
Otherwise, Stephen Lawless’s direction came across as perfunctory, and the choreographed
swordfight with clanging blades where anvils should be is still a very silly sight.

So count this Trovatore as a success for Cornetti and especially Marrocou. Next in San Diego,
the bold choice of Wozzeck, directed by Des McAnuff. It opens April 14th.