The phone call at midnight, the frantic request to drop
everything and “just come–we have a problem, we need you to cover all performances and it’s
curtain up in just two weeks……”

Yet that usually happens when the house in question knows that the young singer already has the
role in his or her repertoire, and it will just be a matter of polishing up the vocal muscle memory,
and learning the stage-moves. No real problem – and exactly the sort of opportunity which is the
life blood of opera. The king is dead (or at least hors de combat), long live the king. But a few
months ago young American male soprano Michael Maniaci had all this, and a lot more, to cope
with and it took him to the very limits of his mental and physical powers in a way that he will
never forget.

It was the very end of December, and he was about to set off for Canada to record his first CD of
Handel arias with the ATMA Classique label in Montreal. He was looking forward to his Met
debut as Nireno in Handel’s “Giulio Cesare” singing alongside Ruth Ann Swenson and David
Daniels in March and his diary was pretty much in order. Then came the phone call – was he
free for a last minute departure for Venice and the acclaimed Fenice, to learn and perform the
role of Armando in Meyerbeer’s “Crociato in Egitto”? It was a difficult call; for a start, he’d
never sung the role. In fact, he’d never heard the opera, or even ever sung any Meyerbeer at all.
But, encouraged by the Fenice’s inference that the two scenes they sent him by email constituted
the bulk of the role, he decided to take the plunge and, with grateful thanks to the understanding
folk at the record label, postponed the recording and headed for the airport. When he landed he
went straight to the opera house, and that is when the dream started to look more like a nightmare
and an artistic “Death in Venice” began to seem a distinct possibility. 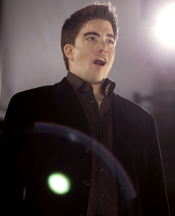 Tired and jet-lagged, he sat himself down at the back of the famous auditorium, and watched the
rehearsals with both 1st and 2nd casts well underway. It was with shock that he suddenly
realised that his role, the title role of the Crusader, was the largest sing in the production and with
just two weeks to go before final orchestra dress rehearsal, he was looking at 350 pages of music
for a role he’d never heard or studied, and in a style he had never sung in. Panic seemed a
reasonable option – and a fast exit back to the airport. However, the director Pierre Luigi Pizzi
then asked him to take the stage and sing the opening scene for him (the one that he had been
sent) and Maniaci realised that this might be crunch time – and so he took the stage, sang the
music and, when he’d finished, Pizzi, without ceremony, walked to the stage, shook his hand,
and said simply “thank you for coming”. It was the stamp of approval and a huge vote of
confidence, and Michael Maniaci decided there and then to head for his canal side apartment
rather than the airport. Little did he know that worse was to come.

The Fenice had, rightly enough, provided him with accommodation that would in other times
have seemed idyllic but, as he shut the door, sat down, and reviewed his position he quite frankly
admits now that he was near to a mental breakdown as the enormity of his task became fully
apparent. He had a huge role, a huge score, to read, memorise and master to not only his own
high standards, but to that of La Fenice. He had just fourteen days to be stage-perfect and as he
walked out onto the veranda overlooking the canal, he says that for a moment he seemed to see
his own body, metaphorically floating face down in the murky waters of a very, very, bad
decision. It was probably the lowest point of the entire experience but when you are ambitious,
talented and hungry you find reserves of strength that you never knew you had. Luckily for
Maniaci, he found those reserves and took the only possible course for a young singer in that
position: he buckled down, shut out the world and started to learn the music…..

In his own words, it was “ten days of hell”, alone in the apartment with only occasional coaching
help from an over-stretched company pianist, trying to absorb new music, new words, and yet
still somehow trying to get some sleep when the brain simply wouldn’t hear of it. Yet, after
those ten days, he was able to return to the opera house and inform them that he had learnt the
role and was ready to learn the staging. Understandably, there was some disbelief among
musicians and staff. Watching his colleague in the first cast rehearse was helpful, and he was
able to jot down notes of the staging – he still hadn’t been given any time on stage – and he went
home each night to walk through the action in his apartment. Suddenly, he got a text message to
say he was to take the stage at the next day’s technical rehearsal – at last! The conductor,
Emmanuelle Villaume, started the proceedings with Maniaci’s colleague, but then stopped after
the second scene and invited the American to come on stage and sing the big Act One trio with
Patrizia Ciofi and Laura Poverelli. He had neither rehearsed it with them, nor with the orchestra.
When they finished, the orchestra cheered and stamped their feet in approval and he was then
invited to do the rest of the rehearsal and staging with the cast and orchestra. But better was to
come – that night, the 9th of January, he was informed he had been chosen to join the A cast and
sing the premiere in less than six days time. Next morning it was his first full run in costume
with orchestra. Two days later it was public general dress rehearsal, and the production opened
on the 14th.

This most demanding role that he had ever sung would be given seven times in twelve days, and
recorded for CD and DVD for good measure. Most seasoned singers, even knowing a role,
would find this a punishing schedule and Maniaci now thinks that it was only his youth (he is just
thirty) and the heady mix of adrenaline and horror that got him and his voice through the whole
production. That and the excellent support given to him by Maestri Villaume, Pizzi and his
singing colleagues, particularly Patrizia Ciofi and Fernando Portari, who all offered both
kindness and assistance in a situation which perhaps only they truly appreciated.

Interestingly, the management at La Fenice never disclosed to the paying public or the critics
what Michael Maniaci had been asked to do, and had achieved. But that achievement did not go
unnoticed by some. This from Francis Muzzu of Opera Now: “Concert (performances) so far
have cast the Velluti role of Armando with a mezzo-soprano, but La Fenice took the fascinating
option of using Michael Maniaci, a male soprano (not countertenor) whose technique and artistry
vindicated the choice triumphantly …… Maniaci has impeccable phrasing, excellent coloratura,
a confident top and an effective stage presence. Matching him was Patrizia Ciofi’s Palmide
whose soprano grows in strength without any loss of flexibility or sweetness – their Act One duet
…… was exquisite.”

I asked Michael Maniaci what, looking back, his final thoughts were. “It was the greatest
musical, intellectual and dramatic challenge I have ever faced. Was it the strongest singing that I
have ever done? Perhaps not. But have I ever been prouder of any accomplishment? Absolutely
not.”

(Michael Maniaci can be seen next in the title role of Berlioz’s arrangement of Gluck’s “Orphée”
at Glimmerglass Opera, USA July/August 2007.
Opera North, (UK stage debut) as Atis in Kaiser’s “Croesus” directed by Tim Albury, conducted
by Harry Bicket, performances through October/November 2007.)